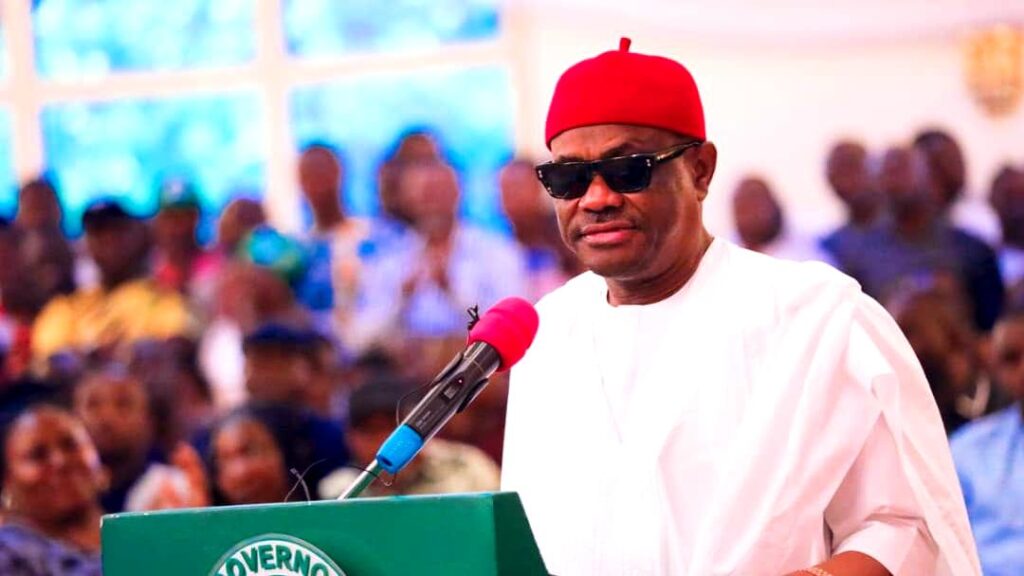 ….says he already has a successor

Rivers State Governor, Nyesom Wike has again advised other political parties in Rivers State not to waste their resources in the coming elections.

Wike said the Peoples Democratic Party (PDP) would sweep all the positions in next year’s elections.

He stated this while speaking during the State Honours and Awards held at the Banquet Hall, Government House in Port Harcourt on Saturday.

“Lawyer, you must make money but here don’t worry yourself; nobody (opposition) would win here,” he said

“I told David Umahi,  Governor of Kogi (Yahaya Bello), and Abubakar Malami (Attorney-General of the Federation and Minister of Justice) when they came to visit me, ‘Don’t put money here it won’t work; it is a no-go area’,” the governor added.

According to him, his government already has a successor and that is based on the good works of his administration.

“In my state, we know who is going to be my successor. I want to advise you if you are spending money on anybody, stop,” Wike said.

Speaking further, governor Wike said he does not owe anyone an apology for commending President Muhammadu Buhari for approving the payment of funds owed to states in the Niger Delta since 1999.

Wike had on November 18, announced that the Buhari-led government paid his state and other Niger Delta states funds owed from the 13 percent derivation fund.

Wike said the funds paid by the federal government have significantly aided his infrastructural strides in the state.

The revelation by the governor Wike has generated different reactions as Nigerians called on other state governors who had received the fund to account for it.

However, the presidency while giving details of the monies on Friday said nine oil-producing states received a total of N625.43 billion as 13 percent oil derivation, subsidy and SURE-P refunds from the federation account between 2021 and 2022.

Wike said he is currently facing some problems because he appreciated Buhari for approving the refund to the nine oil-producing states.

“Instead of human beings to say they appreciate you, they become envious that why were you appreciated. Because I said Buhari thank you, I’m having problem today,” he said.

“I’m not a fan of Buhari. I told the honourable attorney-general but when a man has done well say he has done well in that area. On the other area, he has not done well, you equally say so.

“I have no apology to anybody. Today, Wike did this and that projects. Look if Buhari did not release the money from 1999, which my party did not even release I wouldn’t have done what I did.

“I don’t give a damn to anybody. I don’t care. I got the money. I’m not a fan of Buhari. He has not done well in so many areas but with this payment of money, he did well.

“My friends and party members may not be happy. Make una no vex oo. This one, Buhari did well. He gave me money and I used it to do something for people in Rivers state. The other ones will talk about their own later.”

Wike used the epoch making event to apologize again to former governor of Edo State, Adams Oshiomole for working against him in Edo State during the governorship election which was keenly contested between the incumbent governor, Godwin Obaseki and Pastor Eze Iyamu of the All Progressives Congress.

Wike said, he fought many people while defending his party, the People’s Democratic Party (PDP).

“Umahi,I fought him. I made sure that he never slept but I don’t know that he left the party because it’s time God wanted to help him.

“Oshio baba! Oshio baba o. Most of remember,I was the one who fought Oshiomole,I fought you, he’s here. I fought you.

“But,I did it for the interest of my party and not for personal interest.”

Among those who received award of recognition include; Governor of Ebonyi State,David Umahi, Samuel Ortom of Benue State,Okezie Ikpeazu of Abia State,Seyi Makinde of Oyo State and Ifeanyi Ugwuanyi of Enugu State.

Former governor of Edo State, Adams Oshiomole, The Attorney General of the Federation, Abubakar Malami,Bala Mohammed of Bauchi and Yahya Bello of Kogi among others.