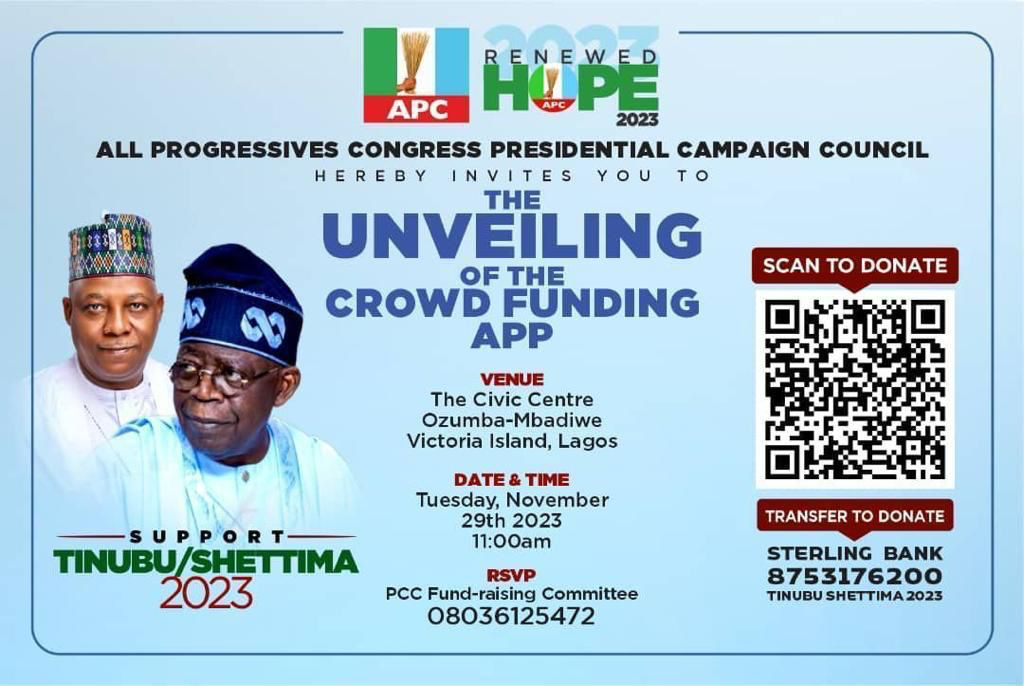 The All Progressives Congress (APC) presidential campaign council has launched a Crowdfund App to enable its presidential candidate, Bola Tinubu and his running mate, Kashim Shettima prosecute campaign activities ahead of 2023 general elections.

Speaking on Tuesday at the launch of the App in Lagos, Kashim Shettima, vice-presidential candidate of the party, said the measure would afford supporters of the party the opportunity to contribute their quota to the campaign.

He said politicians in some developed nations like United States of America also raised political campaign funds from small donors to energise support base.

According to him, the platform is also to assess the acceptance of politicians’ political agenda among political supporters.

He added that it’s also to break new grounds in political mobilisation.

“Our ticket is poised to modernise and expand public infrastructure; make healthcare, education, and funding accessible to all-for the manufacturer sector,” he said.

“It also seeks to improve national security and build Nigeria, especially for our youths via sufficient jobs with decent wages, and to prepare a better life for our people.

“Prior to our campaign, we have been overwhelmed by supporters looking to contribute their quotas and ideas, and now we have a platform to ensure that no one is left out.”

“With innovation like this, everyone will be given the opportunity and due recognition to contribute to the growth and development of our country,”he said.

Shettima, described the APC presidential candidate, Tinubu as an innovative politician of the time, with intellectual sophistication and ability to keep promises.

He said that Tinubu’s many innovative schemes had transformed and provided leadership in the state and Nigeria with verifiable records.

On his part, Babajide Sanwo-Olu, governor of Lagos, described app as novel and unique, saying “there is no better idea than to use technology.

He said the application was another way of using technology to support the Tinubu and Shettima candidacy.

“Today, technology is a unifier and one means that has provided a unique platform for everyone to engage and to collaborate,” Sanwo-Olu said.

“I am happy and excited that you have also brought that initiative to Lagos for it to be launched.

“This is not only unique, it is first-in- class and speaks to an opportunity for all of our supporters to have an input into it. This is about them; this is for them; this is their campaign.”

He affirmed that Tinubu-Shettima had been proven, tested and done creditably well to move the country forward and make it stand in the comity of nations.

“This is not about them (Tinubu/Shettima); it is about the future, it’s about the opportunity that this team presents and what they are bringing to table which is tried and tested in building men and institutions.

“These are truly tested men that can indeed take our country and our economy to an enviable position,” Sanwo-Olu said.

The App according to report garnered over #100m within two hours it was launched.