President Biden stumbled several times while running up the steps of Air Force One on Friday, new video shows.

The 78-year-old commander-in-chief had his hand on the railing when he tripped twice before falling over the third time as he flew up the stairs of the idling aircraft at Joint Base Andrews.

After recovering, Biden appeared to take a moment to dust off his knee before finally making his way to the top. He then gave a salute before ducking into the cabin to take off for Georgia.

President Biden hangs onto the railing with one hand as he stumbles while climbing the steps of Air Force One while departing Washington.REUTERS

“I know folks have seen that President Biden slipped on his way up the stairs to AF1, but I’m happy to report that he is just fine and did not even require any attention from the medical team who travels with him,” she tweeted. “Nothing more than a misstep on the stairs.” 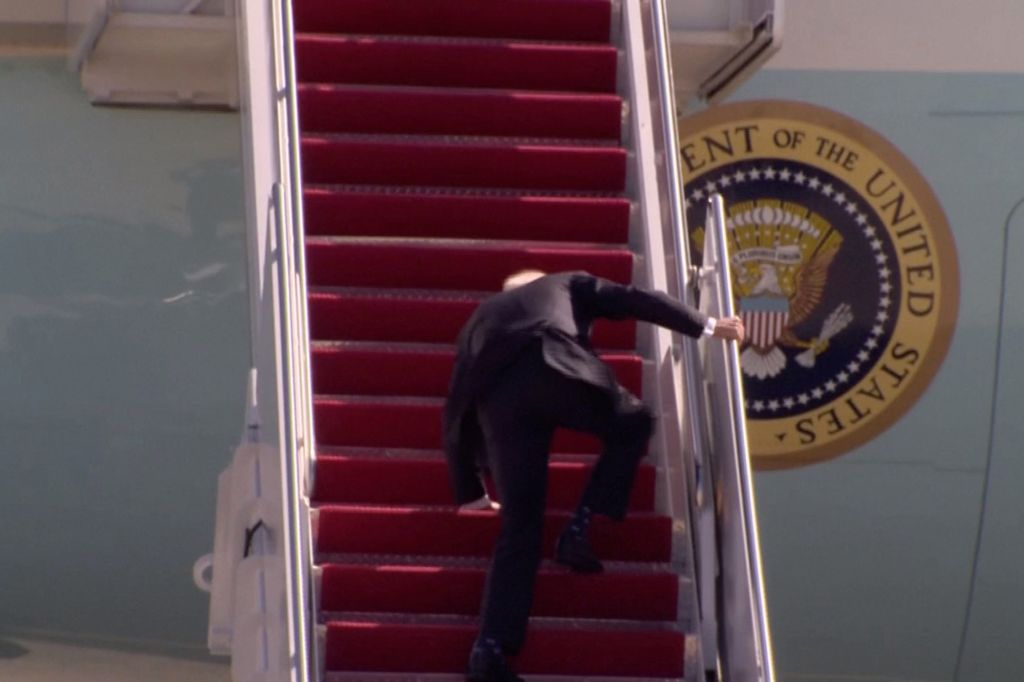 The 78-year-old commander in chief tripped twice before falling over the third time as he flew up the stairs of the idling aircraft.

The president and Vice President Kamala Harris are set to meet with the Asian community in Atlanta following Tuesday’s mass shooting at area spas and massage parlors that left eight people, including six Asian women, dead.

In November, Biden suffered a hairline fracture in his right foot while playing with his rescue dog Major, requiring him to wear an orthopedic boot for several weeks.

After he recovered, Biden gave a salute at the top of the steps before ducking into the cabin to take off for Georgia.Patrick Semansky/AP

He once mocked former President Donald Trumpafter videos of his predecessor walking gingerly walking down a ramp at West Point went viral.

“Watch how I run up ramps and he stumbles down ramps. OK? Come on,” Biden said last September.