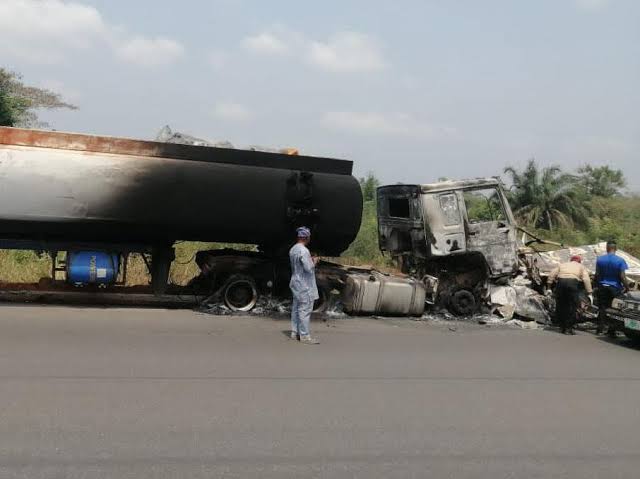 About 17 lives have been reportedly lost on Friday after an accident on the Lagos-Ibadan Highway.

The accident which happened at the Isara area of the highway, according to the Federal Road Safety Corps was caused by traffic regulations violations which later led to fire outbreaks.

No fewer than 17 persons were burnt to death on Friday in an accident involving a Mazda bus and a tanker at Isara Bridge on the Lagos-Ibadan Expressway.

Umar said that the accident occurred at about 5.00 a.m., adding that the number of people burnt to death in the accident could not be ascertained.

He stated that the accident was caused by route violation and dangerous driving, which resulted in a head-on collision and thereafter fire outbreak.

The sector commander noted, however, that he could not ascertain which of the vehicles was at fault.

He said the bus was inbound Ibadan, while the tanker was outbound Ibadan.

He identified the two vehicles involved in the accident as a Mazda bus with registration number ZT 28 KLD and an unmarked tanker.

The FRSC official stated that only one male adult, one female adult and one female child could be identified out of the victims.

He noted that the vehicles were partially obstructing the service lane.

Umar said that the Isara Divisional Police Station and FOS Morgue, Isara, had been informed of the incident.

The sector commander said that the accident was avoidable if the traffic rules and regulations had been obeyed.

He commiserated with the families of the deceased and enjoined them to contact the FRSC Ogere, for more information about the crash