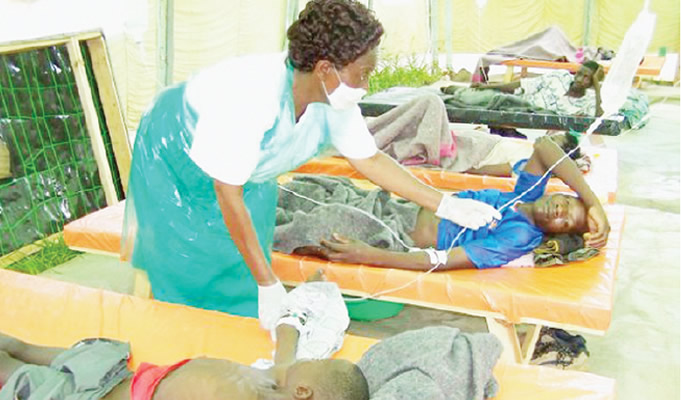 The Ebonyi Governor, David Umahi, said he would provide 10 boreholes for the people of Afikpo North local government area of the state as a way of tackling water scarcity in the area.

Umahi said he would also construct modern toilets in the area within the next two weeks.

The Governor made the promise during his visit to patients of cholera at Amata Akpoha Hospital on Tuesday.

The News Agency of Nigeria (NAN) recalls that the state had recorded cholera outbreak and no fewer than nine persons have been reported dead in the affected community.

Umahi thanked the Chairman of Afikpo North Local Government Area, Uchenna Nnajiofor, the Commissioner for Health, Dan Umezurike, and Health Workers for their efforts at saving the lives of the patients.

“I commend the stakeholders of the area for their prompt response. I urge them to continue to uphold peace in their domains.

“There is nothing as good peace, the same way we should not allow division to come in between us. When leaders struggle for supremacy, it is a terrible thing because there is a place for everybody,” Umahi stated.

The Governor also donated 100 bags of rice, wrappers, two cows and sums of money to the patients and health workers in the hospital.

The Commissioner for Health, Dr Daniel Umezuruike, said over 100 patients have been successfully managed at the Health facility.

Umezuruike thanked the State Government for giving the Health Stakeholders the wherewithal to operate.

Anti-Obesity Drugs Or Surgery Now Advised For Some US Children

US FDA Clears Path For Pharmacies To Sell Abortion Pills