Dominic Cummings: What is the scandal about?

The UK prime minister's most senior adviser has come under fire for travelling across the country during the coronavirus lockdown.

Dominic Cummings drove 260 miles (418km) from London to Durham, and took a 60-mile round trip from Durham to a nearby town on his wife's birthday - a trip he says he made to test whether his eyesight was good enough to drive.

Mr Cummings is facing calls to resign, both from opposition politicians and members of the governing Conservative Party, whose leader, Boris Johnson, he advises.

In a highly unusual move for an adviser, Mr Cummings gave a press conference on Monday. He said he believed he acted "reasonably" and within the law. He has so far been backed by Mr Johnson and other senior government ministers.

But his actions have raised the question - did one of the government's most senior employees ignore the rules he had helped set for millions of people across the nation?

Who is Dominic Cummings?

Mr Cummings is Boris Johnson's chief adviser. He is not a member of parliament and is not elected.

Before the current lockdown scandal, he was best known for masterminding the successful Vote Leave campaign in the 2016 Brexit referendum, which saw the UK vote by a narrow majority to leave the European Union.

Mr Cummings was played by actor Benedict Cumberbatch in Brexit: The Uncivil War - a 2019 drama about the referendum.

Last year, he advised Mr Johnson to call an early election and to fight it on a "Get Brexit Done" ticket. The vote gave the Conservatives their biggest election win since 1987.

Mr Cummings has never been a member of the Conservatives and he is seen as a divisive figure within the party. Former Conservative Prime Minister David Cameron once described him as a "career psychopath".

But he is more than just a run-of-the-mill adviser to Mr Johnson - in many ways, his ideas have forged the government's agenda. He has played a key role in advising the government on its coronavirus strategy.

What did he do during lockdown?

In late March, Mr Cummings drove about 260 miles from his London home with his wife and child to a farm in north-east England owned by his parents. He says that his wife was unwell at the time and that he got sick soon after, with what they believe was coronavirus.

Then in mid-April Mr Cummings was spotted with his wife and son in a town a 30-minute drive away from his parents' home. He has said he made the trip in order to test his eyesight, which he was concerned had been impaired by coronavirus.

The two newspapers that broke the story, the Mirror and the Guardian, also reported that the adviser returned to northern England a second time - a claim Mr Cummings has denied. 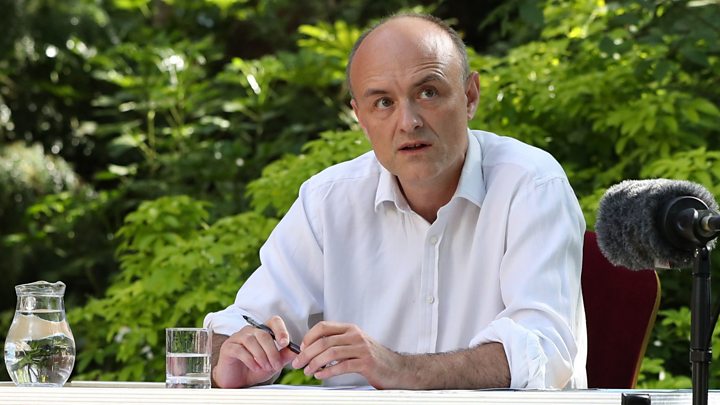 The reports about Mr Cummings have prompted widespread outrage. The government's message at the time - a message that Mr Cummings reportedly helped to draft - was "Stay Home".

The British public had been expressly instructed to self-isolate for two weeks after experiencing coronavirus symptoms. Many avoided travel even at the cost of missing the passing and funerals of loved ones.

One of the British government's scientific advisers and Scotland's chief medical officer have both been forced to step down in recent weeks for breaking UK lockdown rules.

How have Cummings and the government responded?

Both Mr Cummings and Mr Johnson insist that the adviser did not break the rules. In the daily coronavirus briefing on Sunday, Mr Johnson said his chief aide had "followed the instincts of every father" and acted responsibly in making the journey.

But his remarks only led to more criticism, with members of the public saying they had ignored their own instincts to be with family members in need because they felt they had to follow the rules.

Others questioned whether the prime minister was implying they were not acting as responsible parents in following the rules. 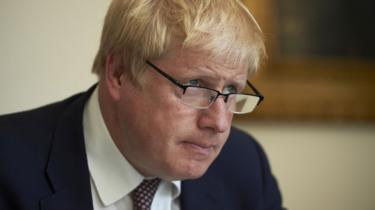 On Monday, Mr Cummings made the highly unusual decision to hold a press conference - normally only elected government officials, not the people behind the scenes, publicly speak to the media.

Addressing reporters in the garden of the prime minister's house, 10 Downing Street, he gave an account of his movements and said he did not regret his actions.

Mr Cummings said he made the trip to his family farm mainly because he needed back-up care for his four-year-old son in case he and his wife were ill. He said it was an "exceptional situation" he believed was covered by the coronavirus regulations.

He said he stayed in a separate property with his wife and child and followed rules on social distancing.

The rules instructed those with coronavirus symptoms and others in their household to stay at home, but they also made this caveat: "If you have children, keep following this advice to the best of your ability, however, we are aware that not all these measures will be possible."

Mr Cummings did not apologise and said he had not considered resigning.

What has happened since?

The government had hoped Monday's press conference would draw a line under the scandal, but it shows no sign of going away. Some have accused Mr Cummings of breaking the "spirit" of the lockdown guidance, even if his actions could be defended legally. There are also worries his actions will undermine the government's coronavirus guidance, encouraging the 66 million people living in the UK to follow their own interpretations of the rules.

"It really is one rule for him [Boris Johnson] and his elite friends and another for the rest of us," one member of parliament with the opposition Labour Party wrote on Twitter. 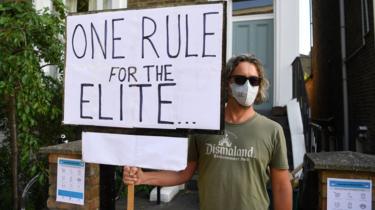 On Tuesday, Junior Minister Douglas Ross became the first person to resign from the government in protest. He said Mr Cummings' interpretation of the government guidance was "not shared by the vast majority of people".

Mr Ross said he could not tell people in the community he represents they were wrong to miss funerals and other family events, and that Mr Cummings was right to drive to his parents' home.