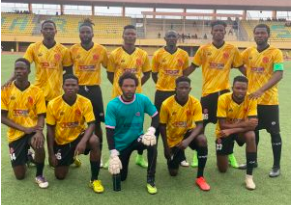 Elkanemi Warriors Football Club of Maiduguri on Saturday brightened their hope of returning to the Nigeria Professional Football League (NPFL) and dashed the chances of Abubakar Bukola Saraki (ABS) Ilorin FC with a 1-1.
The News Agency of Nigeria (NAN) reports that the 2021/2022 Nigeria National League (NNL) match Day 11 was played at the Kwara Stadium Complex, Ilorin.
The host looked shaky for most of the first half thereby allowing the visitors to operate freely from all the departments.
Elkanemi Warriors would have their goalkeeper, David Obiazo, to thank as he stood firmly whenever the need arises.
Obata Ogala scored the visitors’ goal in the 37th minute to silence the Kwara Stadium Complex with his bench in full glare jubilant mood.
ABS winger, John Maurice, missed a huge opportunity with five minutes on the clock before the break and left his bench in anguish after meeting a perfect Noah Ogidi’s fine cross.
Two minutes into the restart, ABS coach, Jerome Igbankwe, made double substitutions with Issac Ogiri and Suleiman Abdulganiyu replacing Jamiu Onikoko and Samuel Bamigboye.
NAN reports that the substitutes brought freshness and attacking profess into the ABS side to level the scores.
In the 62nd minute, experienced AbdulRahman Bashir missed a big chance to bring the game on level term when he headed wide.
The Centre Referee however pointed to the spot in the 63rd minute when Ibrahim Muhammed was adjudged to have been hacked in the visitors’ box.
The ABS captain stepped forward to take the penalty but Obiazo went to the right side to deny him with a perfect parried effort.
When it was thought that the match will end in defeat for the visitors, Suleiman Abdulganiyu rose to the occasion to even the scores four minutes into the five minutes injury time.
The result means, Elkanemi will remain at the summit with 22 points while ABS remained in the 3rd position with 20 points after the draw as a win would have shoot them into the top spot on the log.
ABS Ilorin FC will now travel to Abuja to face EFCC on match Day 12.