Emma Raducanu: The making of Great Britain's US Open finalist

Emma Raducanu was not even a teenager when she had to make a big decision about her future.

It was a choice she made reluctantly.

Having been encouraged to take up a variety of sports by her father Ian - including horse riding, swimming and basketball - she was particularly enamoured with motocross.

"I was racing go-karts for a year or two when I was younger - about eight - and then at 10 I transitioned into motocross," she told Amazon Prime earlier this week.

"I'm into motor sports but I couldn't carry on with it as my tennis career progressed. It turned out pretty well."

That has proved to be an understatement. Little more than five years later, the 18-year-old has reached a Grand Slam final.

With a steely composure in executing her skills, and an effervescent personality endearing her to fans across the globe, Raducanu has emerged as a star.

Having burst on to the professional scene by reaching the fourth round at Wimbledon in July, she has surpassed that by reaching the US Open final in only her fourth tour-level event.

"She has a great attitude, she is smart and is doing extremely well - I'm sure she will continue along the right path," said Britain's former world number one Andy Murray.

The sporting prodigy shaped by her parents

Raducanu's rise has been heavily influenced by her Chinese mother Renee and Romanian father Ian, who both work in the finance sector and moved to London from Canada when their Toronto-born daughter was two.

First grabbing a tennis racquet at the age of five, Raducanu went on to join the Bromley Tennis Academy before her potential was spotted by the Lawn Tennis Association.

The governing body took Raducanu under its wing from an early age, with the youngster taking part in camps and trips abroad before progressing through the age groups.

While that support has clearly been crucial, her parents' influence also continues to be evident in the way Raducanu remains composed on court and grounded off it.

"I think that the calmness and the mental strength definitely comes from my upbringing," she said this week.

"I think my parents have both instilled in me from a very young age to definitely have a positive attitude on court.

"When I was younger, it was definitely an absolute no-go if I had any sort of bad attitude. So from a young age, I definitely learned that and it's followed me until now."

Raducanu's surprise run in New York has had a downside - her parents have been unable to see any of her matches in person.

Nor will they be able to see Saturday's final - against another teenager in Canada's Leylah Fernandez - because of the strict travel restrictions to the United States.

"It's not possible, because you need a waiver and it takes a couple weeks for approval. It's too late and they won't be able to get one," said Raducanu, whose love of motorsport has remained strong.

While she had long been tipped for stardom by those within British tennis, Raducanu was untested at the highest level before being given a wildcard for Wimbledon.

Ranked 336 in the world as she faced only her second tour-level event, Raducanu took everything in her stride on the way to the last 16.

But, then came a worrying moment. Having beaten two top-50 players at the All England Club, she had to retire from the fourth-round match with breathing difficulties and dizziness when trailing 6-4 3-0 against Australia's Ajla Tomljanovic.

Speaking after her first practice session in New York, Raducanu explained to BBC Sport how the experience had illustrated the physical improvements she had to make.

"I haven't done much work relative to these other girls who have been on tour for 10 years," she said almost three weeks ago.

"Then to be playing the intensity I was at for a couple of weeks in a row, it was something completely new to me."

That was achieved by playing more matches leading up to the US Open - reaching the quarter-finals of an ITF Tour event in Pennsylvania and the final of a WTA Challenger event in Chicago - and then coming through three rounds of qualifying at Flushing Meadows.

Having four days without a match between qualifying and her first-round match benefited Raducanu, as has having a day off to recover between the main-draw matches.

Another key element to her physical improvements has been the decision to bring physio Will Herbert into her team. Herbert is a former trainer with German men's world number four Alexander Zverev and former British number one Kyle Edmund - and according to Raducanu, he is her "mechanic".

Identifying what she needs to change to be more successful is a key part of Raducanu's make-up.

Following her breakout Wimbledon exploits, Raducanu returned to being coached by Andrew Richardson - a former British tour player who she also worked with before she was a teenager - having been guided by the experienced Nigel Sears at the All-England Club.

Discussing the switch with BBC Sport before US Open qualifying, she spoke about the need for "fresh eyes and a fresh voice", saying Sears - who is best known for coaching former top-five ranked players Ana Ivanovic and Daniela Hantuchova - brought the most value at "the top of the game".

It is a move which has paid dividends.

Working with a variety of coaches has enabled Raducanu to "take nuggets of information" as she looks to build her own identity, says Anne Keothavong, captain of Britain's Billie Jean King Cup team.

"Emma is a sponge. She learns so quickly," said British doubles player Naomi Broady, who has been exchanging texts with Raducanu before her matches this week. "She does all her match scouting as well, she loves it. She enjoys the educational side of tennis."

Keothavong, speaking on Amazon Prime, added: "Emma has got her own mind and builds her own picture of how she wants to play and perform."

Naomi Cavaday, a former British tour player who also coached Raducanu when she was younger, backs up that view.

"She's a phenomenal worker, the best worker I've ever met and always has been," said Cavaday.

"Every single shot, she will be looking for analysis and asking questions - it has always been that way."

Those close to Raducanu are cautious about heaping too much expectation on the teenager's shoulders.

Iain Bates, the head of British women's tennis, says it is important to "live in the moment" and leave predictions about her career trajectory until further down the line.

There are no guarantees for young players with talent. The story of Britain's Laura Robson - who reached the US Open fourth round as an 18-year-old in 2012 before her career was derailed by injury - is an example of that.

"When you see that kind of talent, that won't be denied. The only thing that could deny is her body," said Czech-American Navratilova, who won 18 major singles titles.

"She is almost like a finished product when she is just getting started." 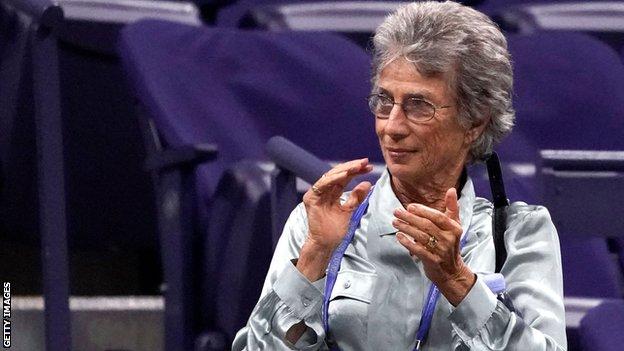 "No question - I'm sure she will win majors," Wade said. "But she will be sharing them with a handful who will be dominating the game."

Murray, who won his first major aged 25 at the 2012 US Open, knows Raducanu's ability well - as he has practised with her at the National Tennis Centre in Roehampton, while her former coach Sears is his father-in-law.

"Her attitude is fantastic, she trains hard, she practises well and I've not heard anyone around say a bad word about her," said the Scot.

The mature, engaging teenager ready to carry the mantle

In sport, fans and media are constantly on the lookout for the next talents who will break out - and British tennis has long been searching for a female star.

Chatty, bubbly and unfailingly polite, Raducanu is comfortable in the spotlight, as her interviews have proved. So too have the scenes of her interacting with fans in New York after her victories, enjoyment etched across her face as she poses for every selfie asked.

This week, she was presented to a new audience with a photoshoot and interview for fashion magazine Vogue.

Making quips about not missing her parents because it is every teenager's dream to be without them in New York, along with her natural giggles in post-match interviews, have also demonstrated how she possesses a sense of fun and is relaxed off court.

"One of the things I've been hugely impressed with is how calm she is and how she is taking it all in her stride," added the Lawn Tennis Association's Bates.

"On court, her level gets better and better as each match goes on. It is hugely exciting for British sport and British women's tennis."

While Johanna Konta has reached two Grand Slam semi-finals in recent years, the buzz around Raducanu has been notably elevated.

Wade says Raducanu going on to win a Grand Slam would "do infinite things" for British tennis and inspire more young players - particular female ones - to pick up a racquet.

"I can't explain how important it is," Wade said. "It is the absolute thrill of someone who you can hopefully depend on and enjoying watching. She has been an inspiration.

"Girls are very mature really at 18. She is smart she thinks very well, she talks very well.

"I think she is going to be able to handle it, but there is an awful lot she will have to handle."