England footballer Tyrone Mings has accused the home secretary of pretending to be disgusted by racist abuse, after she previously described taking the knee as "gesture politics".

Marcus Rashford, Bukayo Saka and Jadon Sancho were targeted after they missed penalties in the Euro 2020 final.

Priti Patel said she was "disgusted" by the online abuse directed at the trio.

Mings said she had "stoked the fire" by refusing to criticise fans who booed the England team for taking the knee.

Ms Patel declined to comment on his tweet, but Downing Street said the home secretary was "working every day to clamp down on hate crime, racism and violence".

The England player and member of the Euros squad was angered by a perceived lack of action by the government when some fans booed the players taking the knee before the tournament.

The act of taking the knee has become a prominent symbol in sport and during anti-racist protests in recent years, and England players have been adopting the stance at the start of their matches.

Speaking to GB News about the England players' protest in June, Home Secretary Priti Patel said she did not support "people participating in that type of gesture politics".

Asked if she would criticise fans who booed England players taking the knee she said: "That's a choice for them, quite frankly".

Writing on Twitter on Monday evening, Mings said: "You don't get to stoke the fire at the beginning of the tournament by labelling our anti-racism message as 'Gesture Politics' and then pretend to be disgusted when the very thing we're campaigning against, happens.".

Defending the home secretary, Downing Street added: "There is no place for racism in this country and she is backing the police to hold those responsible for this abuse accountable."

Prime Minister Boris Johnson is due to hold a meeting with social media companies later to discuss online abuse.

But former Premier League footballer Anton Ferdinand, himself a victim of racist abuse during his career, told the government to "sort your own house out" before going after social media platforms.

Asked if the government was doing enough, he said: "No."

Ferdinand said there was no point in the government talking about what it was planning to do when as "the people that run this country" they are "not condemning" those that boo players taking the knee.

He added: "How can you not condemn that, but then come out and say it's about social media?"

Rashford apologised for the missed penalty in a statement posted on Twitter on Monday, but added: "I will never apologise for who I am and where I came from."

A mural of Rashford in his hometown of Withington was defaced after his penalty miss - but it was later covered in messages of support and solidarity.

Rashford said he was "on the verge of tears" when he saw the supportive messages.

The mural has since been repaired.

Withington Walls co-founder Ed Wellard, who commissioned the artwork, said the people responsible for defacing it should be educated not punished. 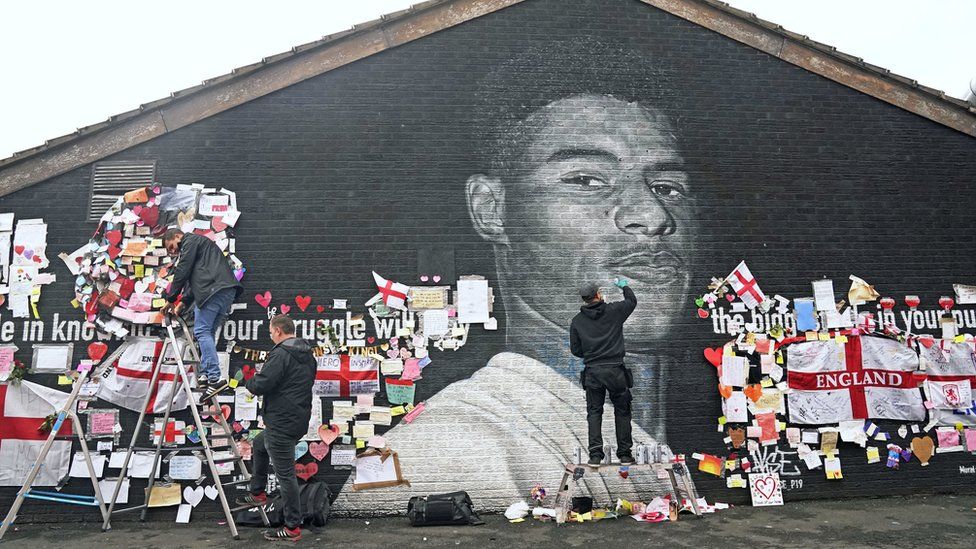 "If you abuse anyone on social media you're not an England fan and we don't want you," he added.

Earlier on Monday, England boss Gareth Southgate said the racist abuse issued after the defeat was "unforgivable". The Football Association also condemned it.

The Metropolitan Police is investigating the abuse and said "it will not be tolerated", while the UK Football Policing Unit (UKFPU) has also launched an investigation.

Mings' intervention comes after Labour leader Sir Keir Starmer accused Mr Johnson of having "failed the test of leadership" by not condemning fans who booed England players taking the knee.

Ahead of Euro 2020, after England's final warm-up game, Downing Street stopped short of condemning fans who had booed players who took part in the anti-racism protest.

But later that week, Mr Johnson said he wanted supporters to be "cheering and not booing" the England players.

After Sunday's match, Mr Johnson praised the England football team, who he said had "played like heroes" and "brought joy to this country".

Addressing those who sent abuse, the prime minister said: "Shame on you - I hope you will crawl back under the rock from which you emerged."

His comments were echoed by Sir Keir who said the abuse was "absolutely appalling".

But he said Mr Johnson's comments had come too late: "The prime minister failed to call that out and the actions and inactions of leaders have consequences, so I'm afraid the prime minister's words today ring hollow."

Downing Street said the prime minister was "explicit in his condemnation of any racial abuse in any circumstances".

Tweeting on the morning after the final, Labour's deputy leader Angela Rayner accused both Mr Johnson and Ms Patel of giving "racists license" and compared them to "arsonists complaining about a fire they poured petrol on". 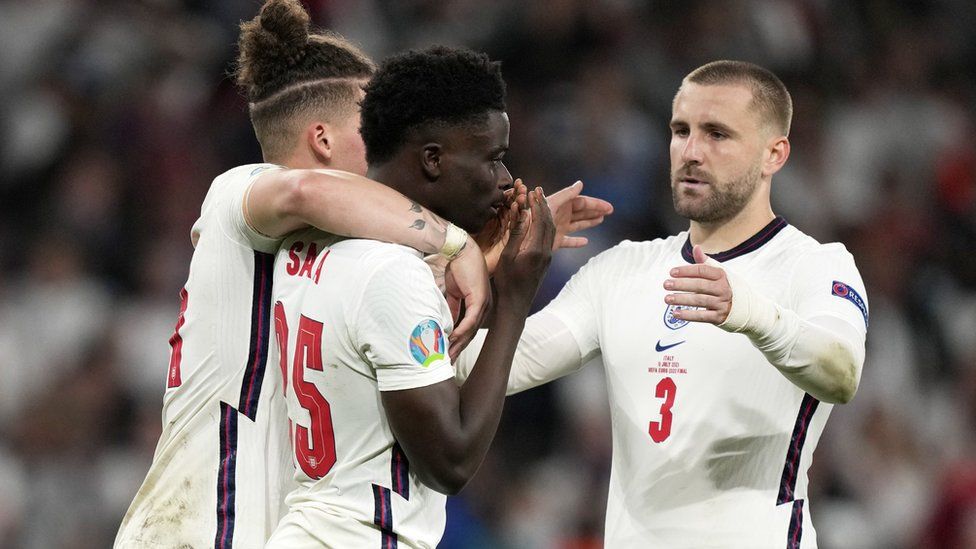 The home secretary was also attacked by Baroness Sayeeda Warsi - a former Conservative minister - who said: "If we 'whistle' and the 'dog' reacts we can't be shocked if it barks and bites. It's time to stop the culture wars that are feeding division. Dog whistles win votes but destroy nations."

However another Conservative MP Fay Jones told the BBC she supported players trying to fight racism but added that taking the knee "is a political symbol and I think that's the problem that certain people have had with it".

Meanwhile, another Conservative Natalie Elphicke has apologised for suggesting Marcus Rashford should have spent more time focusing on football than "playing politics", after he missed a penalty.

The abuse received in the aftermath of the match has also raised questions about the role of social media companies.

Speaking in the House of Commons, Ms Patel said social media companies could "no longer ignore some of the appalling, vile, racist, violent and hateful content that appears on their platforms".

"We have been clear that if they do not stamp this out we will take action against them in the Online Safety Bill," she added.

The proposed legislation is yet to be published but it could give the media watchdog Ofcom powers to fine social media companies up to £18m if they fail in their "duty of care".

The Football Association has also urged social media companies to ban abusers from their platforms, as well as gathering evidence to make prosecutions easier.

In a statement, Facebook said it had "quickly removed comments and accounts directing abuse at England's footballers".