If Mikel Arteta thought his return to familiar territory would also bring about a change in form and fortune, he was sadly mistaken.

Arsenal only got going in injury-time when Jordan Pickford made two fine saves and by then it was too late for The Gunners who looked a pale shadow of the side that lifted the FA Cup only a few months ago.

This is a decent Everton side who have risen to second in the table on the back of their third consecutive win but Arsenal didn’t make it too difficult for them. 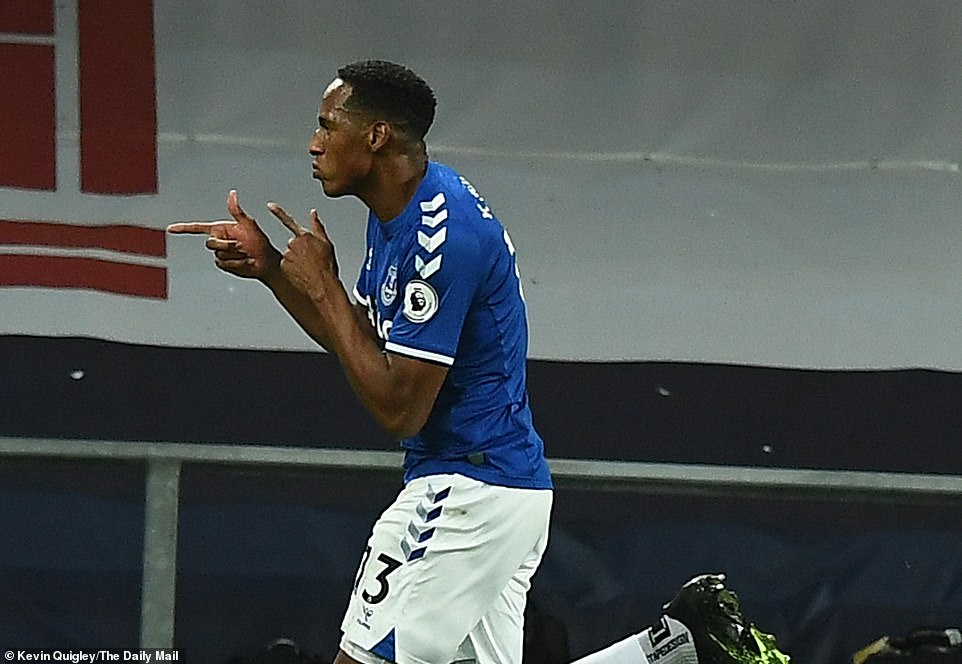 Yerry Mina celebrates his goal, which proved decisive as Everton secured a 2-1 victory at home to Arsenal on Saturday 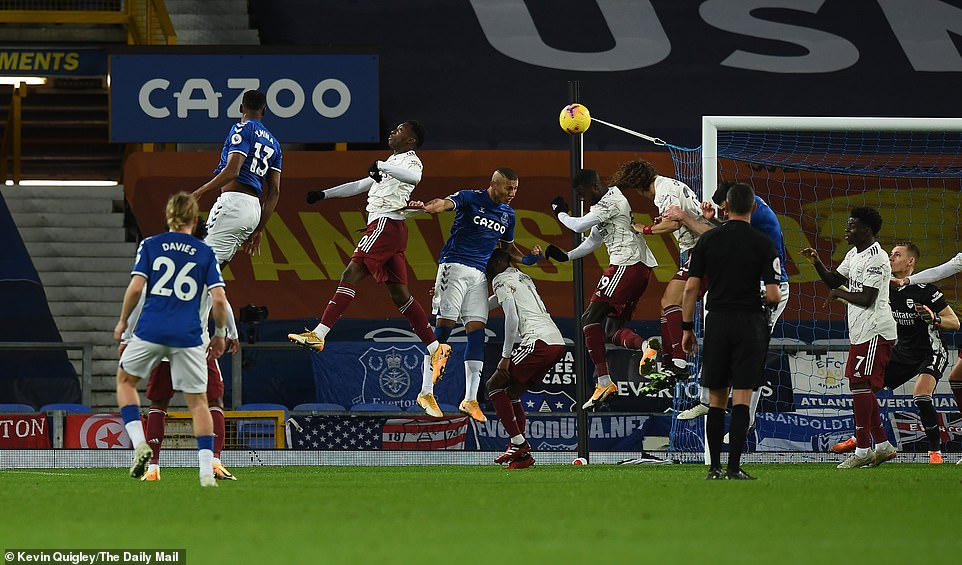 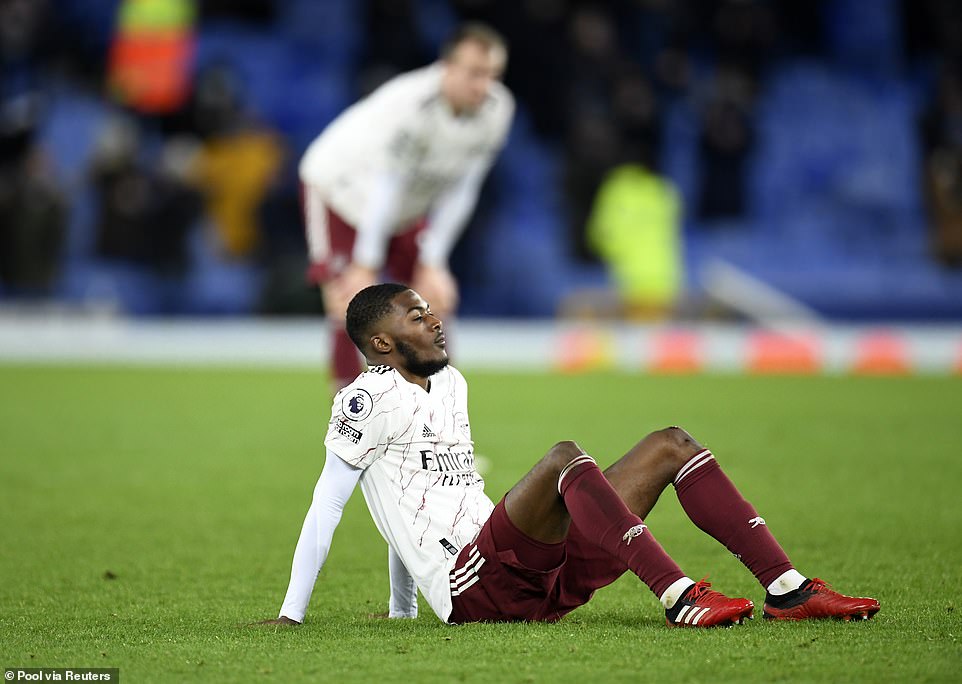 Arsenal manager Mikel Arteta described the 'humble' Italian as 'one of the best managers in history'.

Arteta, who spent six years as an Everton midfield player during the David Moyes era, has serious problems to address as his team slumped to their seventh game without a victory.

Surely they genuinely are too good to go down but they remain stubbornly close to the relegation zone and without the injured pair Thomas Partey and Pierre-Emerick Aubameyang they looked short of quality even if the effort wasn’t lacking.

This was their seventh league win without a win and represents their worst start to a season since 1974/75 – a dreadful way for Arteta to contemplate his first year in charge with the anniversary on Sunday.

It summed up their current plight that Rob Holding took the armband in Aubameyang’s absence and marked the occasion with an own goal. 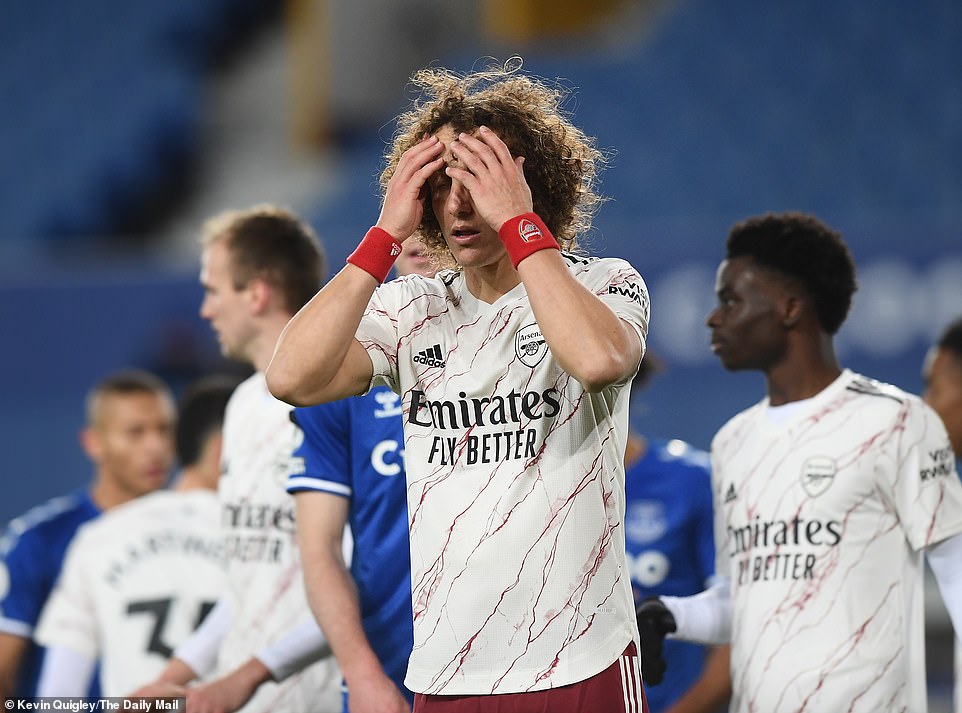 David Luiz expressed his frustration, with Arsenal finding it very difficult to break Everton down in the second half 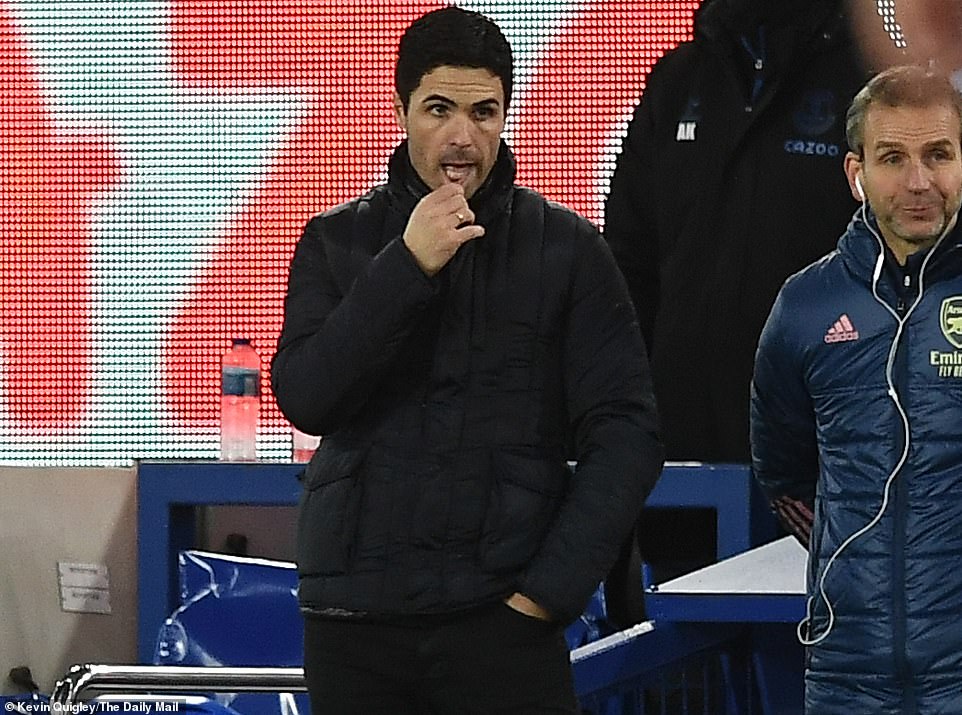 And even when when Nicolas Pepe levelled with a penalty against the run of play, it was lax marking that allowed Yerry Mina to head what turned out to be the winner on the stroke of half-time.

‘We knew they would be exposed at set pieces,’ admitted Everton striker Dominic Calvert-Lewin afterwards, rubbing further salt in the wound.

For his side, it was a good way to celebrate their own first anniversary of Carlo Ancelotti’s appointment. There have been ups and downs but Everton are looking defensively disciplined at the moment particularly as their modern midfield dog of war Allan was missing for this game.

Their only scare in the second half until the very end came when Pickford punched to David Luiz on the edge of the box and the Brazilian struck the post with his deflected strike.

Right at the end, Ainsley Maitland-Niles and Bukayo Saka had decent attemps but Pickford’s reflexes were equal to both. It was still odd that with Aubameyang nursing a tight calf, £60million French international Alexandre Lacazette was only given 15 minutes at the end by Arteta to try and save the game.

With Goodison Park one of the few Premier League grounds still allowed to entertain fans, there was a bubbly atmosphere created by two thousand Bluenoses in the Gwladys Street End.

The early stages were more chess-like than fully charged with Arsenal defending deep, conscious they had conceded to Southampton after only 18 minutes in midweek.

Despite their best efforts, they didn’t keep their goal intact for much longer on this occasion. Everton had already had a long-range pop from Michael Keane before they struck after 22 minutes.

Tom Davies switched the play to the right where ex-Gunner Alex Iwobi found yards of space despite Arsenal having so many defensive-minded players on the pitch.

Iwobi had time to pick out a cross and a stooping Calvert-Lewin glanced a header that struck Rob Holding’s outstretched leg and past Leno. 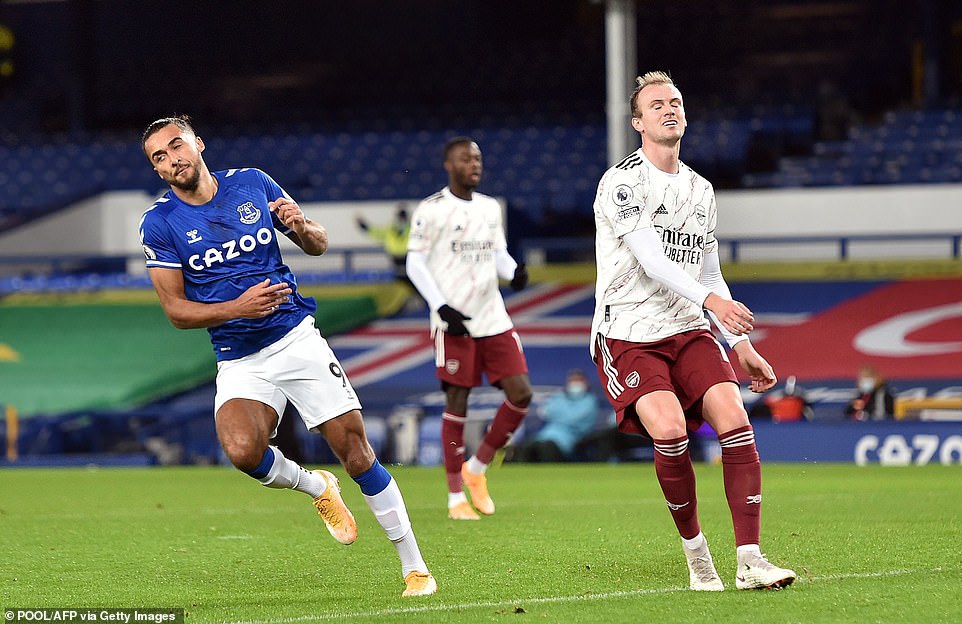 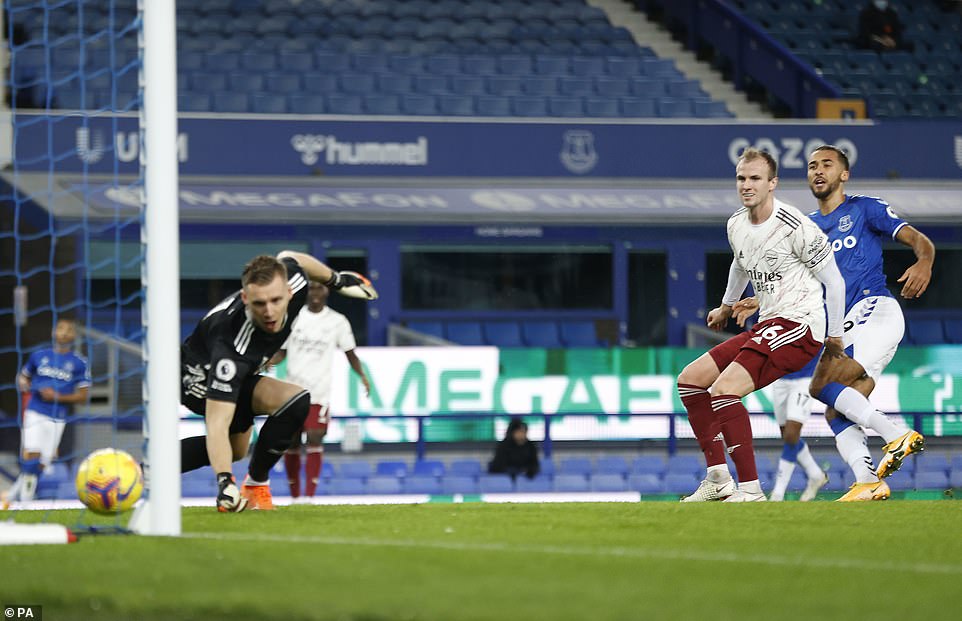 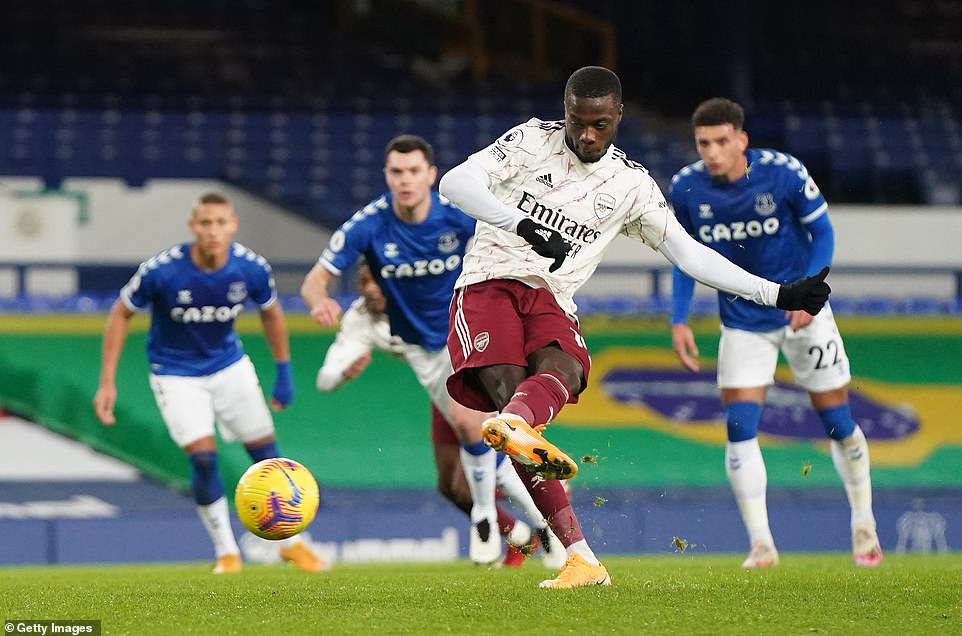 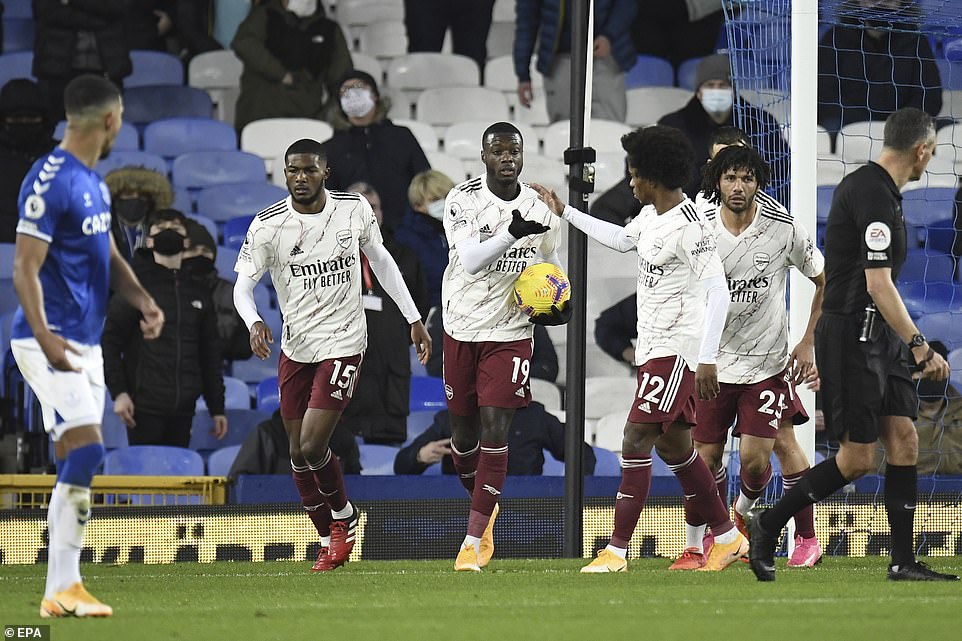 Holding looked disgusted at the injustice of it all and Calvert-Lewin, who is chasing the Premier League golden boot, probably wasn’t best pleased either to find out it had been classified as an own goal though he was charitable enough to state: ‘It is the three points that matter.’

Arsenal looked disjointed and short of confidence but they got a break after 35 minutes when Mina’s cleared to Maitland-Niles who was foolishly clipped by Davies. Pepe converted from the spot by sending Pickford the wrong way.

All the visitors had to try and do was reach the interval level. But just as the amount of injury-time was announced, Everton restored their lead.

Calvert-Lewin, who had earlier been cut down to earn Kieran Tierney a booking, tried an explosive shot with his left foot that Leno did brilliantly to turn aside for a corner.

Any congratulations the German goalkeeper received were short-lived. From the resulting set-piece from Sigurdsson, Mina rose above any Arsenal defender and though Leno again got his fingertips to the ball, this time he could only palmed into the net.

A stern-looking Arteta saw his side show more spirit in the second half but without seriously threatening Everton who seemed happy to head the ball away from their box all evening. 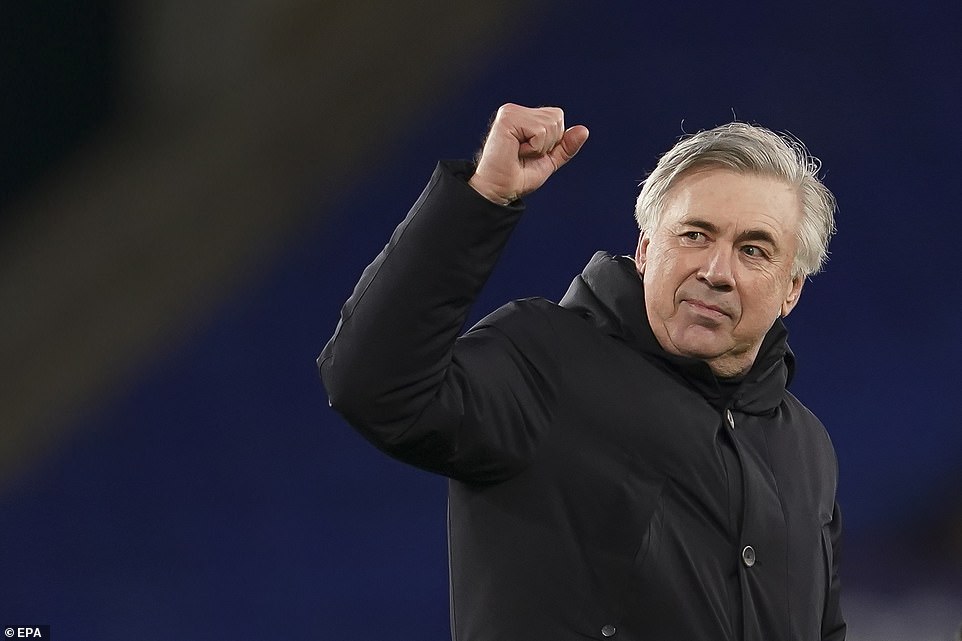 Everton manager Carlo Ancleotti was jubilant after the game, with his team moving up to second place in the Premier League 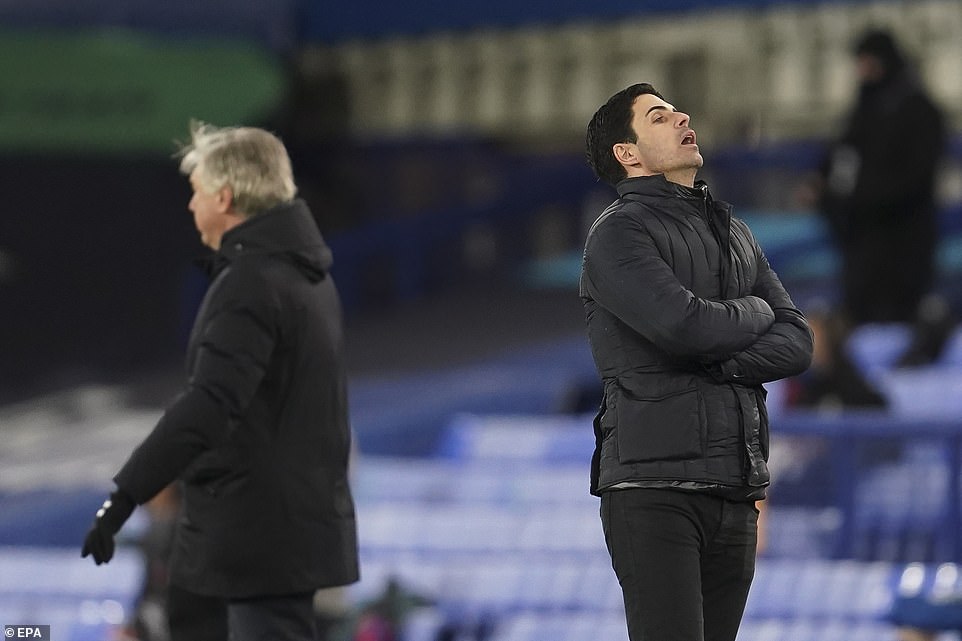 Mikel Arteta, who oversaw yet another defeat for Arsenal, is left dejected after the full time whistle at Goodison Park 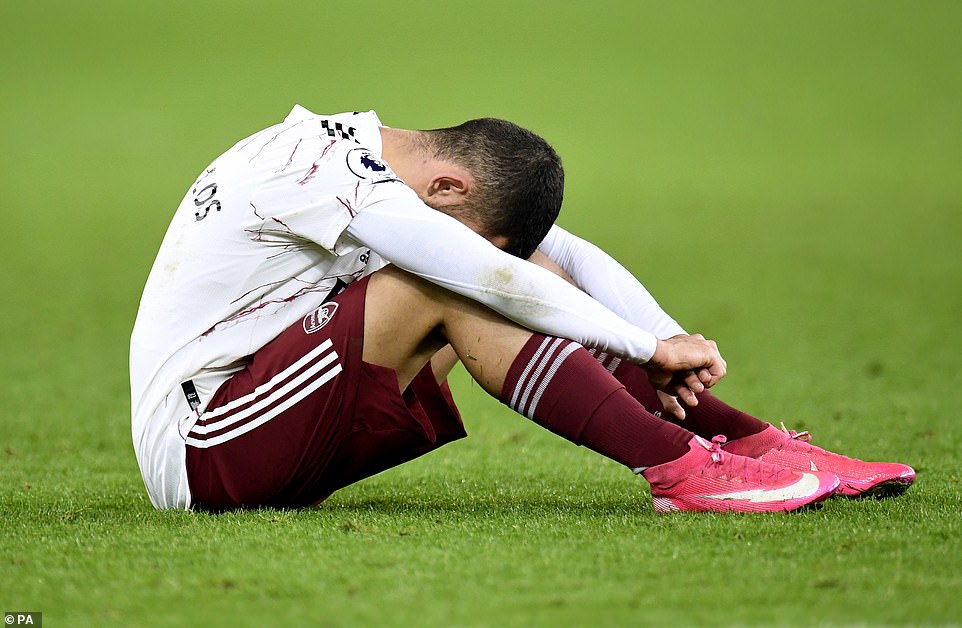 The only scare came when Luiz hit the ball into the ground first time and watched in anguish as it deflected off an Everton body and on to the post.

In contrast, Everton always looked dangerous on the counter with one lung-busting run from Ben Godfrey ending in a cross only marginally too high for Calvert-Lewin.

Arteta threw on Joseph Willock, then Gabriel Martinelli back from a long-term knee injury and finally, belatedly, Lacazette.

Pickford beat away Saka’s shot towards the end of five minutes of injury-time but a late twist would probably have been more than Arsenal deserved.

Ancelotti will celebrate his first year in charge more heartily than Arteta who seems to collect a red card or own goal every week.

‘We are pleased. The position in the table is really good,’ said Everton’s Italian maestro. ‘It was a top performance but we have to keep fighting.’

Arteta remains defiant but knows he has to change results soon or probably have to look for another job. ‘The boys are absolutely still fighting,’ he remarked. ‘We dominated the game. We created enough chances at least to not lose. We hit the woodwork. We don’t have the luck.’