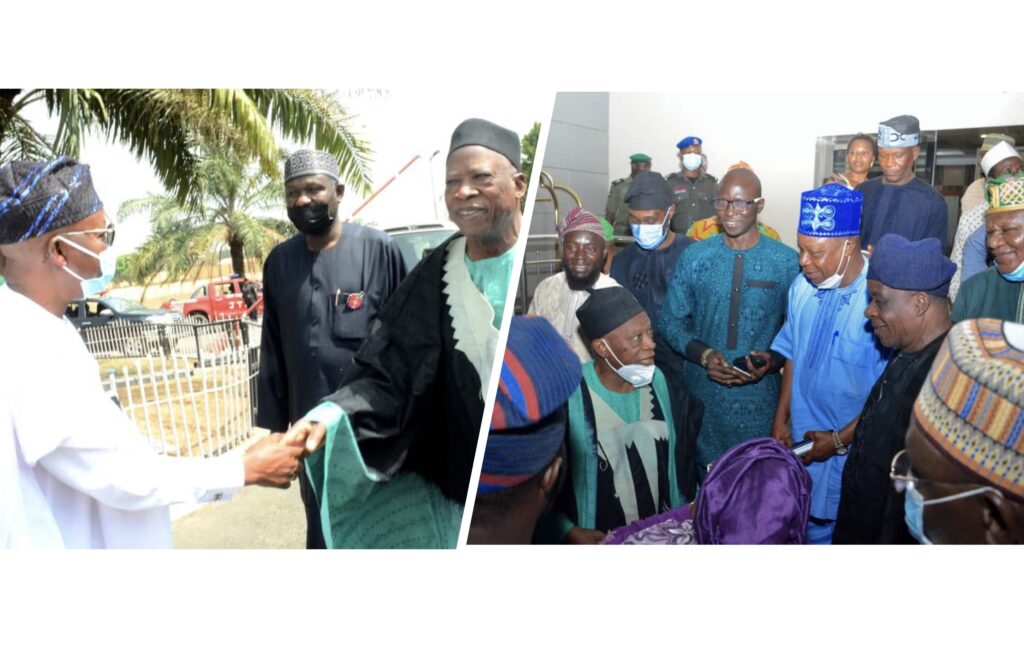 All eyes are on Osun chapter of the All Progressive Congress as the Abdulahi Adamu-led national reconciliation committee met with the warring factions at the state capital, Osogbo, on Saturday.
The committee had arrived at the Government House where it met Governor Gboyega Oyetola and members of his team.
In the committee that is visiting Osun, apart from the chairman, are former Deputy Governor of Lagos State, Idiat Adebule, former Governor of Oyo State, Chief Moses Adeyemo; former Governor of Enugu State, Sullivan Chime and others.
During its courtesy call on the governor, the chairman it is part of the template of the committee to first pay a visit to the governor after which the committee meets other parties to listen to their grievances.
“As a matter of tradition and respect, when we go to a State like this, where our party is in power, we owe it a duty to pay courtesy on the Governor, because here (Government House) is our home, to announce and inform him we are in his land. That is what brought us here. After this, it is our intention to see what efforts had been made on those who petitioned. If they are identifiable, we want to meet with them.

“After meeting them, we will come back to our home to meet the Governor and our party so that if there is any allegation or accusation from the petition received, and after listening to the petitioners, we will listen to the responses in order to ensure fair hearing from all the parties involved.

“Our intention here is to maximize the opportunity of getting evaluation of relevant materials after which we will go to Abuja and sit as a committee and develop what we have in the report, which we will share with the authority of the party at the national level that appointed us,” the chairman said

The committee later met with the faction that is loyal to the Minister of Interior and former Governor, Rauf Aregbesola at the Aenon Suites Osogbo.
Representing the faction at the meeting were the chairman of the faction, Alhaji Rasaq Salinsile, Chairman of The Osun Progressives (TOP), Elder ‘Lowo Adebiyi and others.
At the meeting, it was gathered that the team had laid before the committee how Governor Oyetola began what they described his divisive politics which has alienated about three quarter of the party members from both his government and the party.
The reportedly told the committee how the more than two years of the alleged divisive politics had destroyed the party and weakened it ahead of the coming election.
The faction told the Adamu committee that these led to parallel congresses in the state at the ward, local government and state levels which has created two factions of the party.
Salinsile, who later spoke with journalists after the meeting said his faction is not opposed to reconciliation on some terms.
He said however that those the national office of the APC had sent in the past to either mediate or conduct congresses had been biased and therefore failed to achieve any progress in resolving the logjam.
“Our prayer is that they should recognize our congresses,” Salinsile said adding that the party has its way of resolving such matters.
“If the party can do justice, why not?”
He expressed optimism that the party would not lose the coming election adding that is the reason behind the agitation for the right thing to be done by the national leadership of the party.
The committee chairman, Adamu, expressed optimism that the matter in Osun would be resolved.