With 98% of votes counted, US TV networks and the Associated Press news agency called the race for Mr Warnock.

Control of the Senate in the first two years of Democratic President-elect Joe Biden's term will be determined by the outcome of the second runoff.

The result is a blow for outgoing Republican President Donald Trump.

The election is being rerun because none of the candidates in the November general election achieved the 50% needed for victory under state rules.

If confirmed, Mr Warnock would become the first black senator for the state of Georgia - a slavery state in the US Civil War - and only the 11th black senator in US history.

Claiming victory, Mr Warnock paid tribute to his mother, Verlene, who as a teenager worked as a farm labourer.

"The other day - because this is America - the 82-year-old hands that used to pick somebody else's cotton went to the polls and picked her youngest son to be a United States senator," he said.

Although Mr Biden's Democrats would need to take both seats to gain full control of Congress, the Republican party of outgoing President Donald Trump needs only to win one in order to retain the Senate.

When will we get a result?

With 98% of ballots counted from Georgia's 159 counties, both races were closely fought.

Mr Warnock has a wafer-thin lead over Ms Loeffler, while Republican David Perdue is tied with Democrat Jon Ossoff.

Thousands of votes remain to be counted in the Atlanta suburbs such as DeKalb County, which is expected to go heavily for the Democrats. Georgia election official Gabriel Sterling told CNN that final results were expected by lunchtime on Wednesday (about 17:00 GMT).

More than three million votes - about 40% of the state's registered voters - were cast before Tuesday. Early voting was a key benefit for Mr Biden in November's White House election.

Meanwhile, Mr Trump - whose unsubstantiated claims that he was the victim of electoral fraud left Republican strategists worried about turnout in Tuesday's Senate runoffs - continued to cast aspersions on the integrity of the vote in Georgia.

media captionHow an election is supposed to be certified

What's at stake in Georgia?

The vote in the Peach State will decide the balance of power in the Senate.

If both Democrats win, the Senate will be evenly split 50-50, allowing incoming Democratic Vice-President Kamala Harris the tie-breaking vote.

This would be crucial for pushing through Mr Biden's agenda, including on key issues such as healthcare and environmental regulations - policy areas strongly contended by Republicans.

The Senate also has the power to approve or reject Mr Biden's nominees for cabinet and judicial posts.

If Mr Ossoff and Mr Warnock both win, it would bring the White House, Senate and the House of Representatives under Democratic control for the first time since President Barack Obama took office in 2009.

What do the exit polls say?

Mr Trump's unproven claims of voter fraud may have eroded voter confidence in the election system, according to exit polls from Edison Research.

Its survey of voters leaving polling stations found around 70% of them were very or somewhat confident their votes would be counted accurately, a drop of nearly 15% from November's White House election.

Exit polls showed Georgians in a clean split over which party they want to control Congress: 49% favoured Republicans, while 48% said the Democratic party.

The demographics roughly matched those in November. Black voters, who made up 29% of the electorate, favoured the Democratic candidates nine-to-one. The Republicans, meanwhile, were winning a majority of white voters.

And these surveys showed that most voters were repeating the choices they made in November. Georgians who supported Mr Trump were casting ballots for Mr Perdue and Ms Loeffler, while Biden supporters were doing the same for Mr Warnock and Mr Ossoff. 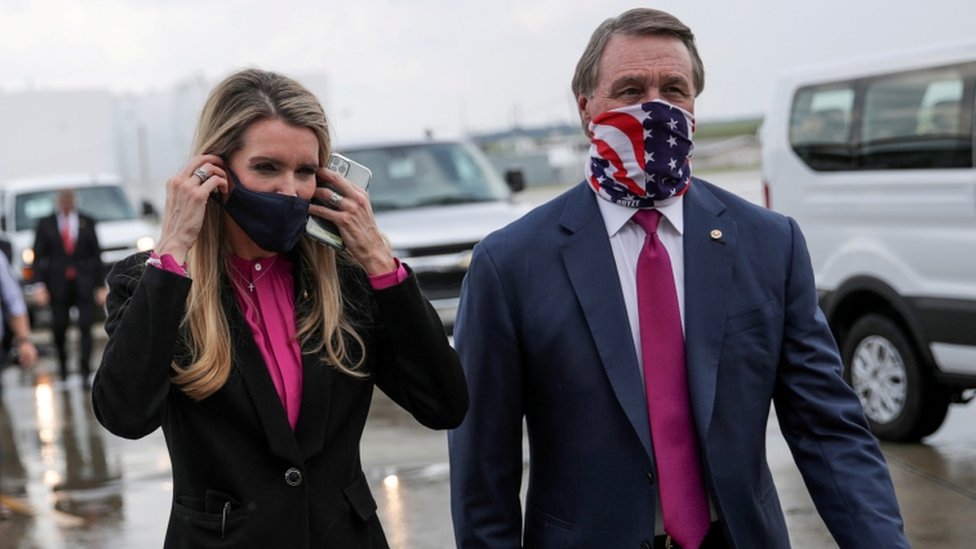 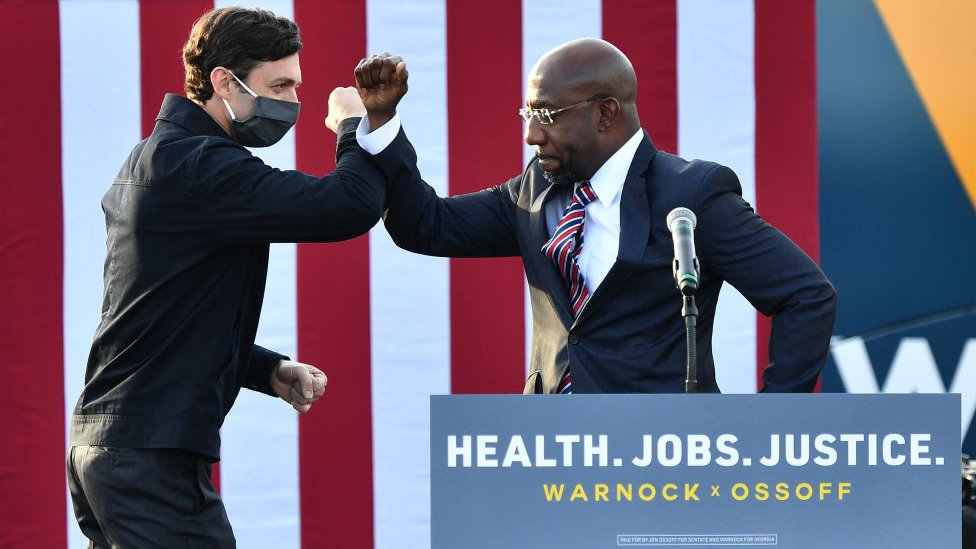 Although the results are not final, it appears Republican worries about the two run-off elections in Georgia were well-founded. Their voters did not show up at the polls in the kinds of numbers they were hoping. Meanwhile, Democrats turned out at higher levels. In county after county, both Jon Ossoff and Raphael Warnock outperformed their general election numbers.

The two Democrats, at times running as a team, appeared to complement each other's electoral coalitions. Warnock energised black voters across the state. Mr Ossoff, although he slightly underperformed his Democratic counterpart, still attracted suburban and educated voters around Atlanta.

If it turns out both Mr Ossoff and Mr Warnock prevail, Donald Trump will receive considerable blame for the Republican defeats. The party that loses the White House usually does better in subsequent congressional elections, not worse. And Georgia, despite Joe Biden's victory there, is still a traditionally conservative state.

Instead, the two races were a dead heat coming down the stretch, as Mr Trump spent most of his time and energy disputing his electoral defeat and lobbing attacks at Republican leaders in the state.

It turns out that may not have been a wise electoral strategy - and it could cost Republicans control of the Senate.

Why was there a runoff election in Georgia?

None of the candidates reached the 50% needed to win outright in the elections in November, forcing Tuesday's runoff elections under Georgia's election rules.

The other seat had more candidates, with Democrat Mr Warnock recording 32.9% to Ms Loeffler's 25.9%.

A Democrat has not won a Senate race in Georgia in 20 years but the party has been boosted by Mr Biden's presidential election win over Mr Trump there. Mr Biden's margin of victory was about 12,000 votes among five million cast.

If elected, Mr Warnock would become Georgia's first black US senator and 33-year-old Mr Ossoff would be the Senate's youngest member since Mr Biden in 1973.

Mr Warnock serves as the reverend of the Atlanta church where assassinated civil rights leader Martin Luther King Jr grew up and preached. 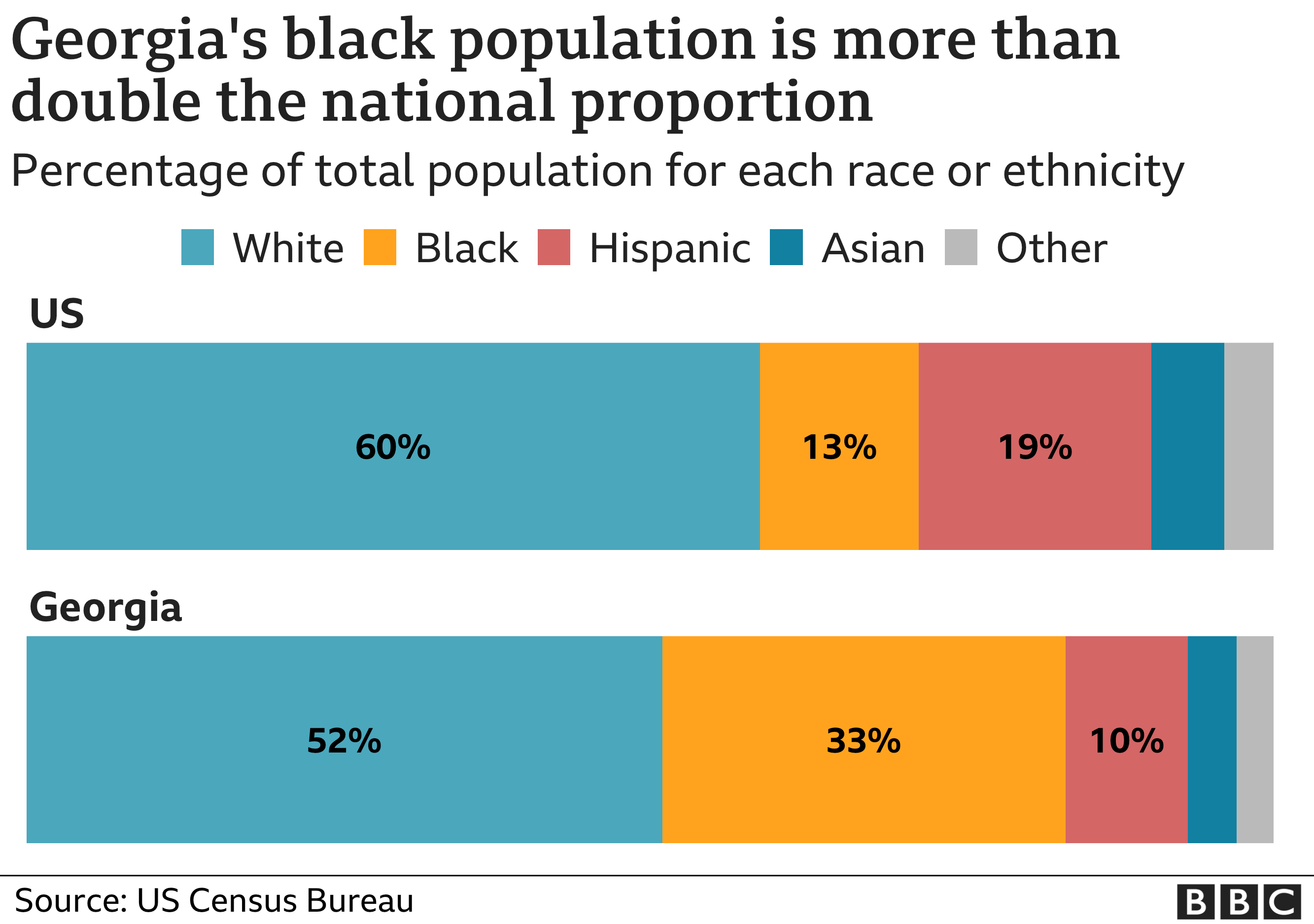 On Wednesday, more political drama will unfold in Washington DC as lawmakers gather in a special joint session to ratify the results of November's presidential election.

The typically procedural affair - which will affirm Mr Biden's victory - has become unusually contentious, with about a dozen Republican senators vowing to challenge the results.

The group, led by Senator Ted Cruz and including Ms Loeffler, wants a 10-day delay to audit unsubstantiated claims of election fraud. The move is all but certain to fail as most senators are expected to endorse the results that have already been certified by US states.

media captionSenator Ted Cruz on Donald Trump: Then and now

Vice-President Mike Pence is set to preside over the session in his role as president of the Senate.

He has come under pressure this week from Mr Trump to reject the certification, but the vice-president told Mr Trump at their weekly lunch on Tuesday that he has no power in Congress to block Mr Biden's win, according to the New York Times. Mr Trump said the report was "fake news".

Supporters of Mr Trump are demonstrating in the capital, disputing the presidential election. Mr Trump is expected to address a "Save America Rally" in the nation's capital on Wednesday. The mayor has asked for the National Guard to be deployed in the city amid fears of unrest.

Mr Biden, a Democrat, is due to be inaugurated as president on 20 January.

President Trump has refused to concede the election to Mr Biden, who won 306 votes to Mr Trump's 232 in the US electoral college, which confirms the president.