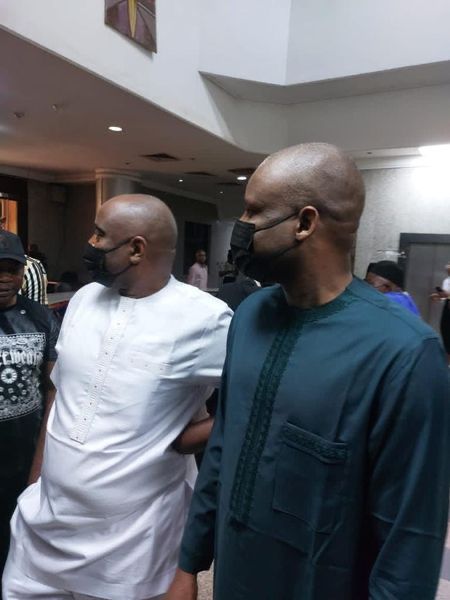 Embattled Deputy Commissioner of Police, Abba Kyari has been brought to court on Monday over drugs related offenses.

The National Drugs Law Enforcement Agency had charged Kyari with eight counts bordering of illicit drugs dealings, sabotage and others.
Kyari was brought to court on Monday at 8:55am amid tight security.

The NDLEA had filed an eight-count criminal charge against him and six others it alleged were involved in drug trafficking.

The other defendants in the charge marked FHC/ABJ/57/2022, which the agency lodged before the Federal High Court sitting in Abuja, were four members of the Police Intelligence Response Team, IRT, ACP Sunday J. Ubia, ASP Bawa James, Insp. Simon Agirigba and Insp. John Nuhu, as well as two alleged drug traffickers that were arrested at the Akanu Ibiam International Airport in Enugu, Chibunna Patrick Umeibe and Emeka Alphonsus Ezenwanne.

The agency, in the charge it filed through a team of lawyers led by its Director, Prosecution & Legal Services, Mr. Joseph Sunday, specifically accused DCP Kyari and the four other police officers of conspiracy, obstruction, and dealing in Cocaine worth 17.55 kilograms.

NDLEA also accused Kyari and his men, who are currently in its custody, also unlawfully tampered with 21.25kg worth of Cocaine.

Kyari pleaded not guilty to counts one, two, three, four and eight levelled against him, the other four police officers, who are defendants in the trial, also pleaded not guilty to counts one, two, three and four filed against them.
But Chibunna Patrick Umeibe and Emeka Alphonsus Ezenwanne, who are 6th and 7th defendants respectively, pleaded guilty to counts five, six and seven preferred against them.
Although their names were also mentioned in counts three and four where allegations bordering on conspiracy were leveled against Kyari and others, they were not ask to take a plea on these two counts.
The four members of the Inspector-General of Police Intelligence Response Team (IRT) in the charge marked FHC/ABJ/57/2022 include ACP Sunday J. Ubia, ASP Bawa James, Insp. Simon Agirigba and Insp. John Nuhu.
Umeibe and Ezenwanne are the two alleged drug traffickers that were arrested at the Akanu Ibiam International Airport in Enugu.
Shortly after taking their plea, the NDLEA lawyer, Joseph Sunday, Director, Prosecution and Legal Services, prayed the court for a trial date for the 1st to 5th defendants.

Sunday also urged the court to grant a leave to review the charges against
Umeibe and Ezenwanne who pleaded guilty for the charges against them.
“We hope to file our prove of evidence latest tomorrow (Tuesday),” he said.
Kanu Agabi, SAN, who led a delegation of Senior Advocates of Nigeria that appeared for Kyari and Ubia, however informed that a bail application had been filed in respect of his clients.

The NDLEA’s lawyer, Joseph Sunday, Director, Prosecution and Legal Services, who confirmed being served with the bail application, said a counter affidavit had been filed in its opposition.
The NDLEA, in the charge it filed through a team of lawyers, accused Kyari and the four other police officers of conspiracy, obstruction, and dealing in cocaine worth 17.55kg.
It equally alleged that Kyari and his men, who are currently in its custody, also unlawfully tampered with 21.25kg worth of cocaine.
The duo of Umeibe and Ezenwanne were accused of conspiring with others at large to import 21.35kg of cocaine into the country.
NAN had, on Thursday, reported that Kyari, formerly head of IRT, and six others would be arraigned before Justice Nwite.
The Attorney-General of the Federation (AGF) and Minister of Justice, Abubakar Malami, SAN, had, on Wednesday, filed an application for the commencement of extradition process of Kyari in the FHC.
The Federal Government, through the Office of the AGF, had filed the application marked: FHC/ABJ/CS/249/2022, under the Extradition Act as part of Nigerian government’s approval of the request by the U. S. for Kyari’s extradition.
Kyari is to stand trial for conspiracy to commit wire fraud, money laundering and identity theft.
He was accused of conspiring with a United Arab Emirates (UAE)-based Nigerian, Ramon Abbas, aka Hushpuppi, to commit the crime, and Kyari had denied the allegations.
A grand jury, on April 29, 2021, had filed an indictment against Kyari with the approval of the U.S. District Court for the Central District of California, and the court issued a warrant of arrest for him.
However, the extradition proceeding is yet to be heard by the FHC as at the time of filing the report.
NAN also reports that Justice Zainab Abubakar of a FHC had, on Feb. 22, gave the NDLEA the go-ahead to detain Kyari and six others in custody for another 14 days to conclude its investigation.
His application for bail was, on Feb. 28, turned down by a sister court, presided over by Justice Inyang Ekwo, on the grounds that a court of coordinate justification had already granted an order for his further detention.
But Ekwo, who said that he was inclined to hear Kyari’s fundamental enforcement rights suit with the urgency it deserves after the expiration of the 14-day court order, fixed March 15 to hear Kyari’s application.
NAN reports that Kyari, earlier through his lawyer, had, on Feb. 21, approached the court with an ex-parte motion and originating summons seeking for a bail and asking the court to enforce his fundamental human rights which he alleged had been breached by the unlawful arrest and detention.
He said that the allegations preferred against him were trump-up and baseless.
Kyari, in the main suit, urged the court to make an order directing the NDLEA to pay him N500 million for infringing on his rights.
He also asked the court to direct the agency to tender a public apology in national dailies.
The suspended DCP had also challenged the order made on Feb. 22 by Justice Abubakar, empowering the NDLEA to detain him for more days.
In an application filed by his counsel before Abubakar, Kyari prayed the court to set aside the order for his detention, arguing that the order was issued without him being accorded a fair hearing.
Abubakar had fixed tomorrow (Tuesday) for hearing Kyari’s application.