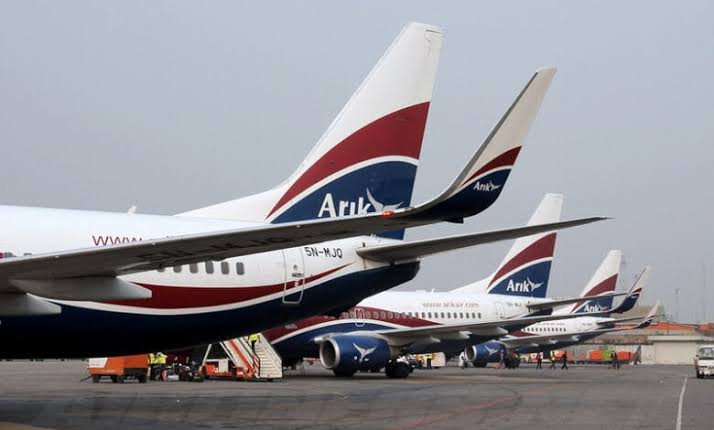 Industrial Court Asks Arik Air to Pay Pilot $126,500 Over Wrongful Termination of Appointment
The National Industrial Court, has ordered ARIK Air to pay Ratovic Miroslav, a former pilot $126,500 in 30 days.
The court gave the breakdown of the sum as: 57,500 dollars or its naira equivalent as payment of his outstanding salary arrears from September 2016 to March 2017 at the rate of 11,500 dollars per month and the sum of 34,500 dollars or its naira equivalent as three months salary in lieu of notice.
The court in addition computed 34,500 dollars, being his three months salary in general damages for the wrongful employment termination.
The sum of N500,000 was also awarded by the court as cost of the suit in favour of the claimant.
Delivering judgment, Justice Edith Agbakoba, also declared that the termination of the claimant’s employment on March 31, 2017, was wrongful and in breach of the parties contract of employment.
From facts, the claimant, Miroslav had submitted that he was employed as a pilot by the defendant to fly its B737 NG series Aircraft on July 31, 2007.
In his statement of facts, the claimant further stated his employment was terminated on March 31, 2017.
He averred that the defendant gave the reason on the basis of his “service no longer required” without giving him any prior notice as contained in the letter of appointment.
He said at this point the defendant was owing him arrears of salary from Sept.1, 2016 to March.31, 2017.
In defence, the defendant averred that the termination of the claimant’s employment was as a result of the takeover of the operations of the firm by the Asset Management Corporation of Nigeria (AMCON).
The defendant in addition argued that the takeover by AMCONl necessitated a restructuring and reorganisation of the operations of the firm.
Defence therefore urged the court to dismiss the claims of Miroslav for being frivolous, contending that the contract of employment was between Arik International S.A (AISA) and not Arik Air Ltd.
The defendant also said that AISA was expected to bear the responsibility for the salaries of the claimant.
Defence counsel further submitted that the extant provisions of the AMCON (Amendment) Act effectively exculpate the firm in respect of the claimant’s claims.
In reply, the claimant counsel maintained that the contract of employment was entered into by his client and the defendant and not by the AISA as claimed.
The counsel also urged the court to grant the reliefs as sought by his client.
The court in its decision however held that all the submissions of the defendant that the claimant was not its employee and the role of the AISA was of no purpose as the court recognised the concept of triangular employment.
“From the contents of this Letter of Release Agreement, the first respondent is the agent of the second respondent and the second respondent is a co-employer of the applicant.
” A cause of action has been disclosed against the second respondent by the applicant”, Agbakoba ruled