New rules that require people to confirm their Covid status before attending large gatherings in Nigeria's biggest city are being largely ignored, reflecting a general indifference towards the pandemic, despite a recent surge in cases.

While the UK added, and then removed, Nigeria to and from a travel red list over concerns about the spread of the Omicron variant of coronavirus, life in the country carried on pretty much as normal.

Even some officials don't seem to be taking their own advice too seriously. Just 48 hours after announcing new Covid restrictions in Lagos, state governor Babajide Sanwo-Olu was at a state-sponsored cooking show with the winner of reality TV show Big Brother Naija.

Attendees and other government officials are now required to show they're fully vaccinated (currently two doses) or proof of a negative test taken in the past 48 hours to attend such gatherings but this did not happen.

There has been a more than 500% increase in Covid cases across Nigeria since last week, pushing authorities in Lagos to introduce new restrictions.

The measures are largely targeted at young revellers preparing for two weeks of wild parties across Lagos in what is known as "Detty December". It is a period when Nigeria's Afrobeats stars try to outdo each other with lavishly staged shows that attract thousands, while many neighbourhoods hold 24-hour street parties. 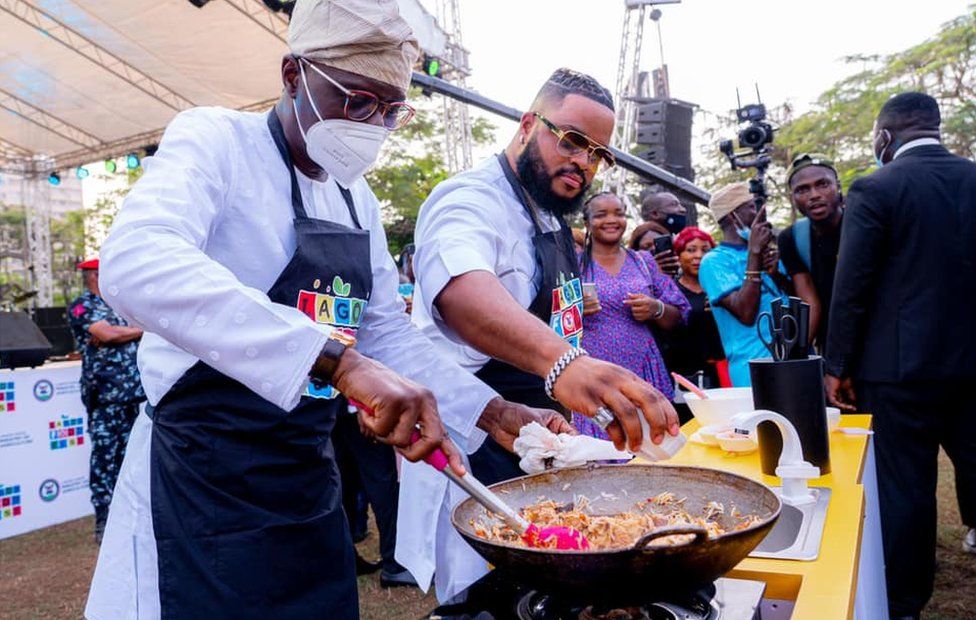 But the new guidelines are hardly being enforced, especially in the neighbourhood parties that attract hundreds, and authorities are concerned.

"Experience has shown that these events have the tendency to be super spreading events," the state commissioner of information Gbenga Omotosho said in a statement.

Mr Omotosho defended the governor's appearance at the food show, saying that the crowd grouped in clusters but admitted that he and others did not show proof of vaccination to attend.

'Malaria is a bigger problem'

Around eight million people have received a first dose of the Covid vaccine in Nigeria, and only half of that number have received two doses.

But this falls far short for a country of 200 million people where the vaccine rollout has been hampered by people's indifference, the unavailability of vaccines in some parts of the country and inadequate supply.

Nigeria has largely relied on donated vaccines which authorities have had a hard time convincing people to take, highlighted by plans to destroy one million vaccines which arrived in the country with less than six weeks before they expired.

With the rising number of cases in Lagos, a city of more than 20 million people, it is hoped that the introduction of the Covid passports will force more people to get the jabs - especially Nigeria's young - many of whom have not been vaccinated. 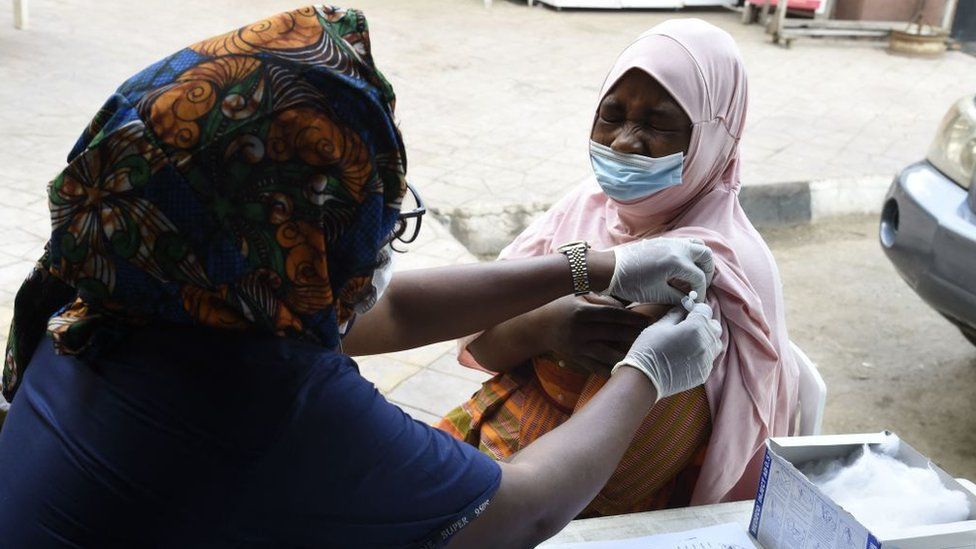 But most revellers are not pleased.

"Why always December?" asked 22-year-old Blessing Ibelema, who said she was looking forward to attending the concert of one of Nigeria's biggest stars, Burna Boy, at the end of the year.

She has not been vaccinated and doesn't intend to. Like many she says she does not understand "the fuss about coronavirus".

"If you give us a malaria vaccine you'd have people queuing up for miles waiting to get it," she said.

This comparison between malaria and Covid has become increasingly popular since the beginning of the pandemic.

According to the WHO, last year 200,000 people died from malaria in Nigeria, more than 80 times the number that died from Covid.

But Nigeria's leading virologist, Prof Oyewale Tomori, has warned of the dangers of using death as a marker for Covid and has compared the country's attitude towards the virus to "sitting on a keg of gunpowder".

Prof Tomori told the BBC that that it was dangerous to play down Covid, as many Nigerians are doing now, as it might trigger hypertension or other conditions later in life.

Currently, Nigeria has officially recorded about 3,000 deaths linked to coronavirus and while it is still hard to be sure how many people have had the virus because of a low rate of testing, the fact is that the country has been spared the catastrophic number of deaths witnessed elsewhere.

Hospitals have not been overrun and some of the isolation wards built in haste because of Covid have mostly remained empty.

Strict lockdown measures imposed last year and experience in dealing with other diseases like polio and Ebola have helped Nigeria in the fight against Covid. 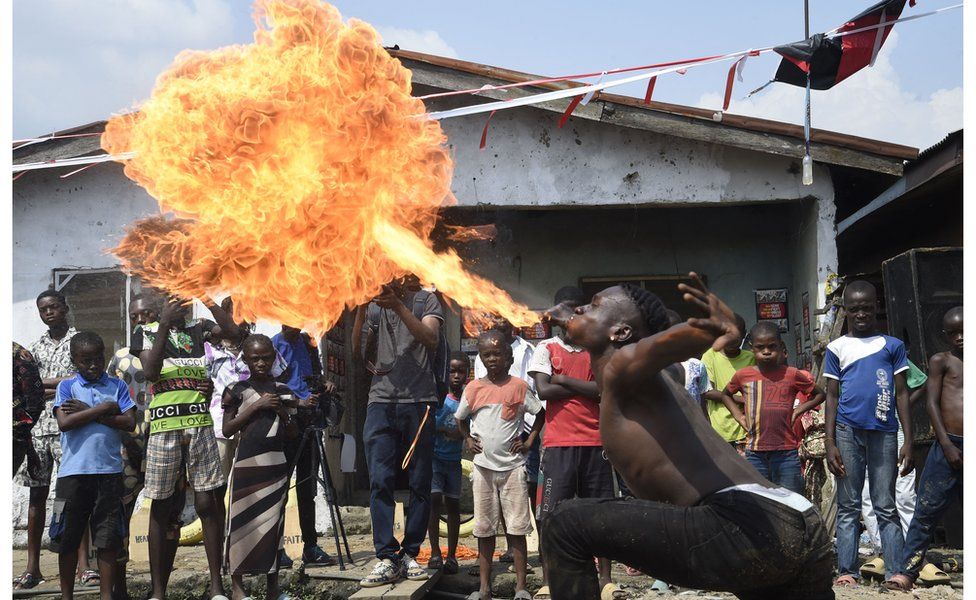 IMAGE SOURCE, GETTY IMAGES
Image caption,
Street parties such as this in Oworonshoki, a Lagos slum, are popular in December but few are following Covid guidelines

Social gatherings were limited, face masks were imposed, event centres were locked down and workers encouraged to work from home.

And like most other African countries, Nigeria's young population has helped it escape the worst of coronavirus. More than half of Nigerians are less than 30, and so less likely to become severely ill than older populations in some other parts of the world.

Many of these young people are not worried about Covid and consider the government guidelines a nuisance.

They rue the impact of Covid restrictions on the country's economy and the thousands of jobs that have been lost.

"My father lost his job last year in an IT firm in Lagos and has had to move to the village in the east," said Ms Ibelema.

No vaccine, no entry

Yet that is why some are taking the new directives seriously - the prospect of losing millions of naira for the second December in a row is one they can't stomach.

Bartender Mercy Ikwulebgu has been vaccinated so she can continue to attend events. But some team members grumbled that they only got vaccinated as a last resort to keep their jobs. 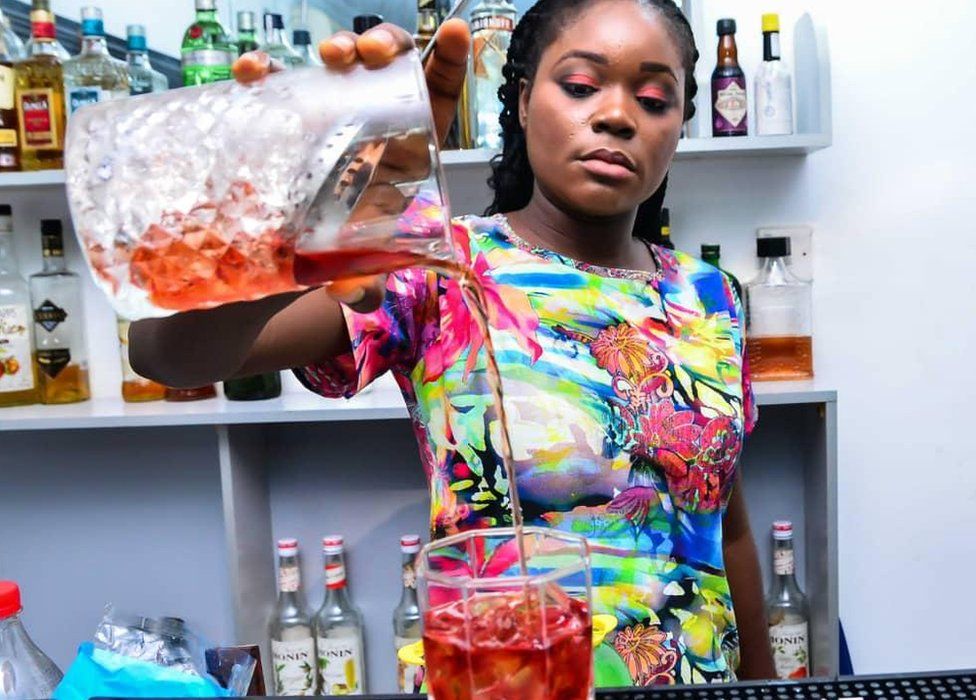 Covid passports are new in Nigeria and Lagos will be hoping that its guidelines are as successful as a similar rule in the capital, Abuja, which made it compulsory for civil servants to be vaccinated under the "No vaccine, no entry" policy.

The number of those vaccinated in the capital since early December has tripled, said one official.

Nigeria has also started giving out booster shots as more cases linked to the Omicron variant are confirmed.

There are still no definitive answers about how severe an Omicron infection is, though evidence so far suggests milder symptoms and lower mortality than previous variants.

That, and the authorities seemingly flouting their own rules, make it even harder to convince young Nigerians to get vaccinated.

"If the government wants a card it will get a card, but rest assured I am not getting vaccinated to attend a party," said Ms Ibelema.