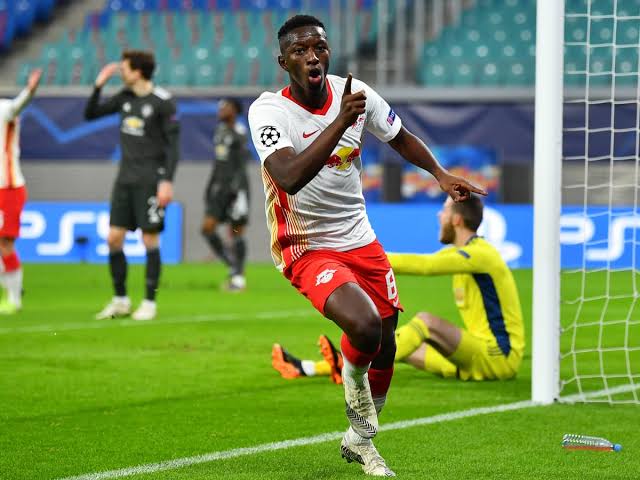 Atletico Madrid dumped Manchester United out of the Champions League round of 16 after edging to a 1-0 victory at Old Trafford on Tuesday.
Renan Lodi scored the only goal just before half-time as Diego Simeone’s side won 2-1 on aggregate after a late draw in the first leg last month.
Tuesday’s result means United’s trophy drought will now almost certainly stretch to five years, with Ralf Rangnick’s side already eliminated from the FA Cup and 20 points behind leaders Manchester City in the Premier League.
“I think we played a very good first half — exactly the way we wanted to play with a high energy level but we couldn’t convert that into one or two goals,” Rangnick said after the match.
“Conceding that counter-attacking goal just before halftime didn’t make life any easier. It was hard in the second half and always interrupted. There was always somebody lying on the floor.”
United named three changes from Saturday’s victory over Tottenham Hotspur, with Bruno Fernandes coming in to start and Paul Pogba and Marcus Rashford dropping to the bench.
Teenage United forward Anthony Elanga, who turned hero to score a last-minute equaliser in the first-leg, went close to opening the scoring on Tuesday.
This was when his run toward the near post in the 12th minute was rewarded with a low cross from Fernandes, but he saw his shot stopped by goalkeeper Jan Oblak.
United goalkeeper David de Gea then produced an outstanding diving save to push wide a long range effort from Rodrigo De Paul.
Atletico had the ball in the back of the net midway through the first half when Joao Felix tapped in to an empty net at the back post, but Marcos Llorente, who supplied the assist, was ruled offside.
It was a typical display of the kind of gritty defending and swift counter-attacking for which Simeone’s side have been known.
United, for all their pressure, were unable to create enough quality opportunities to get themselves the goal they needed.
The visitors did eventually take the lead in the 41st minute through Lodi as he scored a jumping header at the back post following a floated cross from Antoine Griezmann.
The move came after Atletico won back possession from Elanga, who looked to have been fouled but saw protests waved away by referee Slavko Vincic.
On Vincic’s calls, Rangnick adeed: “I would also say some curious refereeing decisions. I wouldn’t say they were decisive but at least he fell too often for those time-wasting antics.”
United pushed for an equaliser in the second half but were unable to find a way back into the match, resulting in their sixth elimination in their past eight Champions League knockout ties.
“In the second half it was a brilliant collective effort from the team, one of the best this year,” Simeone said in a postmatch news conference.
“I’m happy, that’s why I celebrated it in the dressing room.”
Elsewhere in the Champions League also played on Tuesday, Darwin Nunez’s 80th minute goal proved enough as Benfica shocked hosts Ajax 1-0 (3-2 on aggregate) to progress to the last eight.