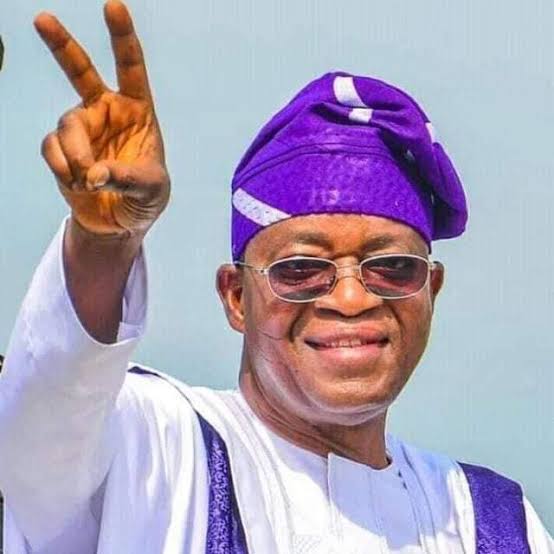 Prominent traditional ruler, Owa Obokun Adimula of Ijesaland, Oba Gabriel Aromolaran, on Wednesday told Governor Gboyega Oyetola he will ensure his subjects support him.
Oba Aromolaran made the remarks when Oyetola visited his palace during a strategic engagement tour to Ijesa-South Federal Constituency on Wednesday.
The traditional ruler, who described Oyetola as a game changer, said his tenure had brought drastic changes to governance in the State.
According to him, the state has witnessed geometric progression under Oyetola’s watch, hence, the need to give him a maximum support to succeed in the next governorship election.
“I profess to you that you are a new Governor. I know why I said it. I greet you warmly and welcome you into the palace of Owa Obokun Adimula of Ijesaland.
“Whoever I tell is a Governor will become Governor. This is a divine gift,” the traditional ruler said.
Also in his remarks, the Alamo of Ayegbaju-Ijesa in Atakumosa East Local Government Area, Oba Adeyemi Abideen, commended Oyetola for running a people-oriented government that had brought drastic changes to all sectors.
Oba Abideen, who is the Chairman, Council of Traditional Rulers in Atakumosa East Local Government Area, disclosed their readiness to work assiduously for the Governor’s re-election.
In his remarks, Oyetola urged the party loyalists to be wary of those engaging in buying membership slips.
The governror expressed confidence in the strength of the party to elect him at the primary and ensure his emergence at the governorship election.
Oyetola, who also received some defectors from Peoples Democratic Party (PDP), implored the party loyalists to keep their membership slips jealously and come out in large number to vote for him.
He said direct mode of voting has been chosen by the National Secretariat of the party for the primary.