Palm oil is facing an almost insurmountable challenge in its bid to replace fossil fuel as an energy source.

Gasoil, also known as diesel, has slumped more than 45% this year, sending its discount to the tropical oil ballooning to the widest since 2011. That has not only wiped out discretionary blending, but it threatens huge biodiesel mandates in top growers Indonesia and Malaysia, and risks derailing palm’s rally.

“The weakness of gasoil prices in relation to crude oil is a sign of the troubles of the petroleum refining industry,” said James Fry, chairman of LMC International. “A large palm oil-gas oil spread means that palm biodiesel has become a very expensive source of diesel fuel.” 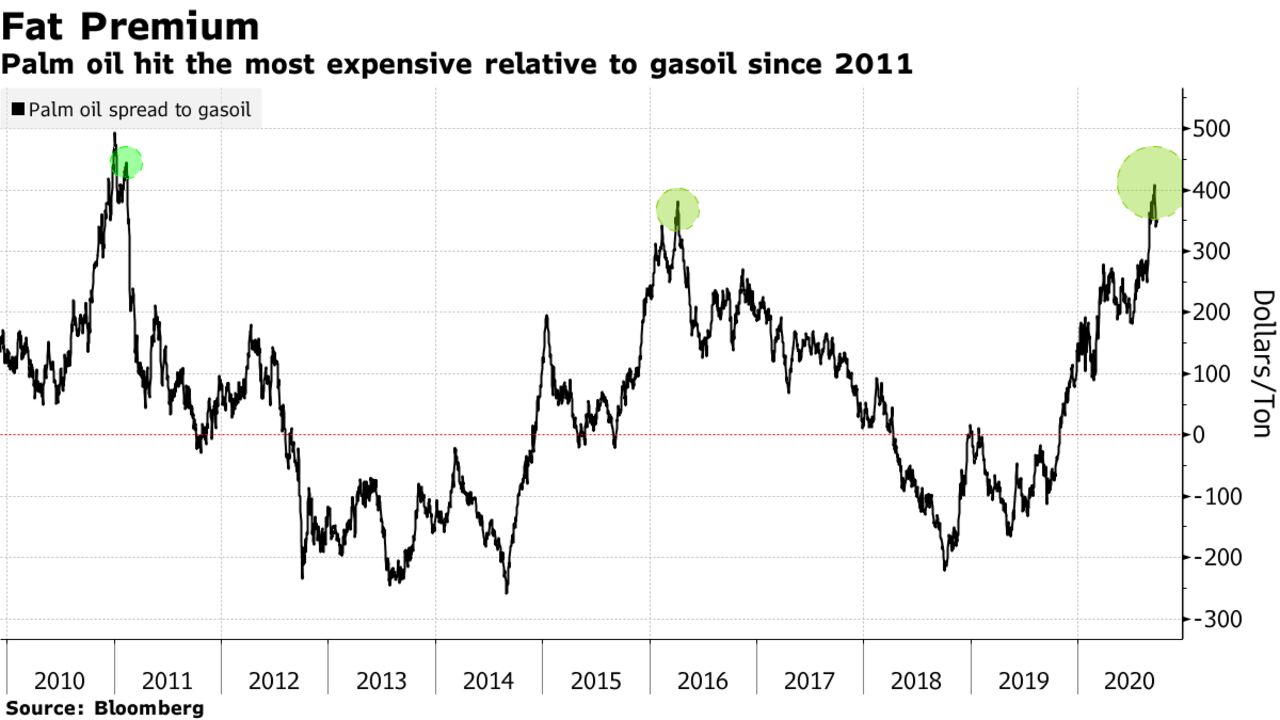 Palm oil is about $350 a ton more expensive than gasoil, double the average in the past year. On Sept. 18, the premium surged past $400 for the first time in more than nine years. The last time the spread was that wide, palm was near 4,000 ringgit ($958) a ton as La Nina flooded plantations in Southeast Asia.

This puts Indonesia’s biofuel fund under pressure, Fry said, although President Joko Widodo seems committed to maintaining the B30 mandate, which entails a 30% blend of palm-biofuel into fossil fuel. Palm-biofuels, seen in Indonesia for instance as a way to slash hefty diesel import bills, need to be attractively priced to encourage consumption, and that often requires subsidies.

“Outside Indonesia, the large palm oil-gasoil spread is likely to lead to some backsliding on biodiesel mandates as governments balk at funding the subsidies on biodiesel, and hesitate about passing the high spread on to drivers,” Fry, a veteran industry analyst, said by email from London.

Malaysia resumed its B20 mandate for the transport sector in the state of Sarawak this month, after delays due to the coronavirus outbreak, and plans to implement the higher blend in the rest of the country by June next year. The government also wants to raise the mandate to B30 as early as 2025.

On palm prices, Fry said weather-related production woes in Indonesia may outweigh labor concerns in neighbor Malaysia over the next few months. “Right now, Indonesia is worried about the after-effects of recent very heavy rains on the evacuation of bunches to mills and oil from mills to refiners, especially if heavy rains associated with La Nina materialize in the next few months.”

In terms of inventories, Fry expects them to rise because of the seasonal high-production cycle in the fourth quarter, and as import demand tails off when palm-biodiesel becomes less suitable in the European winter. That should narrow the price spread to fossil fuel. Benchmark palm oil futures are already down more than 8% from their eight-month intraday high reached on Sept. 21.