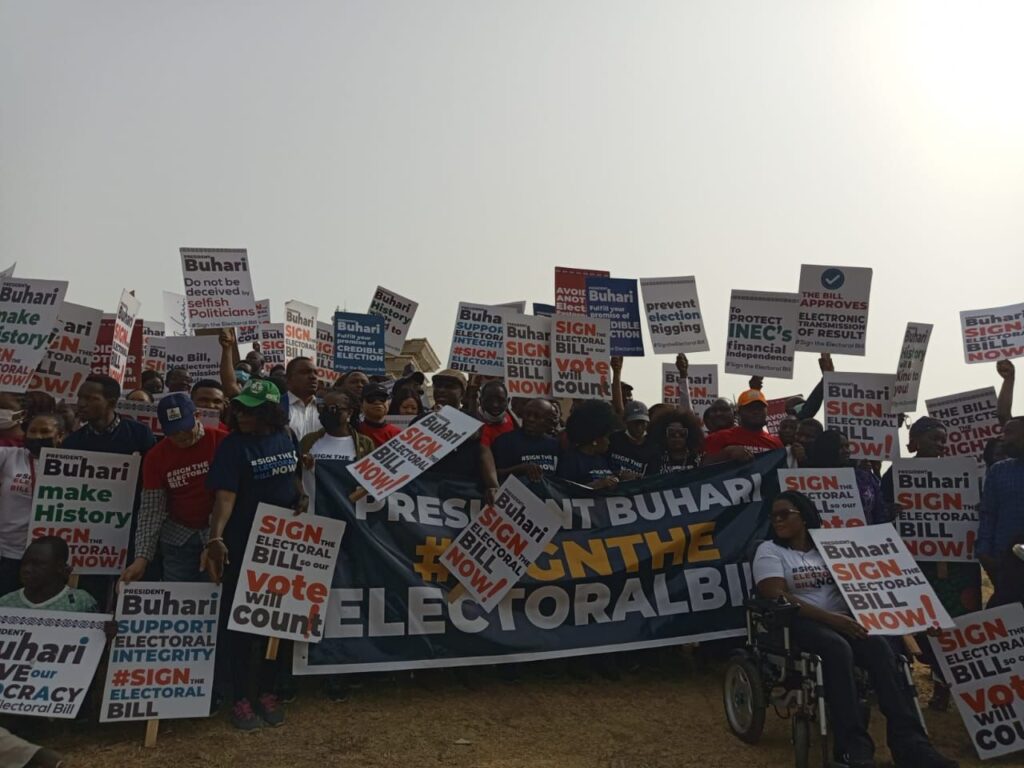 Some protesters have stormed the Federal Capital Territory to demand from President Muhammadu Buhari his assent to the Electoral Bill.

The protests, which have members drawn from various civil society groups is taking place at the Unity Fountain, Abuja.

Many placards asking the president to sign the bill into law are being displayed with many of them adding that the only way out of Nigeria’s political situation is a credible electoral culture.

Addressing the gathering, Mrs. Helen said the Nigerian president had promised to sign the bill into law, wondering what could be the reason for the delay.
She said, “To sign the electoral bill is our major concern and President Buhari made a promise to us on National Television that he would sign the bill as soon as he receive the amended version from the National Assembly.

“We are calling on Mr. President to fulfill the promise he made to Nigerians to sign the bill as soon as he receives the amended version from the National Assembly. Our major concern is for the president to sign the bill as a matter of urgency and with all sense of patriotism for the betterment of Nigeria populace.”

Also speaking, Yemi said all that is required from the president is to sign the bill between now and tomorrow. She quoted Mr. Femi Adesina saying that the President would sign the bill in a matter of hours.

“It’s important for President to sign the bill because if the bill is signed into law, many irregularities in our electoral process would be corrected especially the area of transparency because election results would be transmitted electronically,” Yemi said

While speaking on behalf of people living with disabilities, Ms. Grace said over 30 million people with disabilities want Mr. President to sign the bill so as to make our electoral process accessible for them.