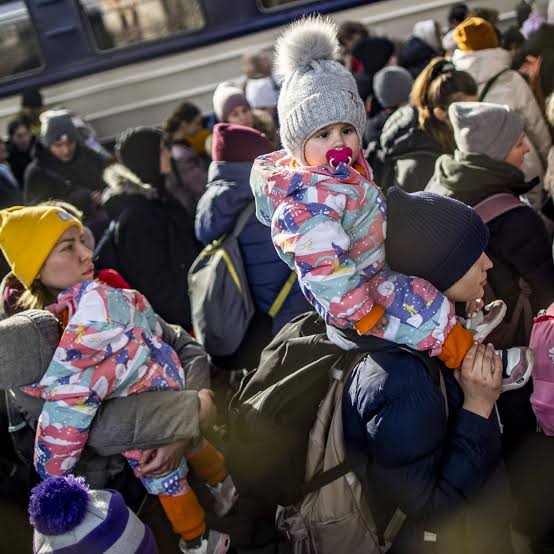 UN humanitarians have warned that the exodus of millions of Ukrainians from their country following the Russian invasion could overwhelm neighbouring countries.

The head of UN Children Fund (UNICEF) on Wednesday expressed her horror over the reported destruction of a maternity hospital in the stricken coastal city of Mariupol, which has been under heavy bombardment for days.

Till date, more than 2.2 million people have fled Ukraine according to UN refugee agency (UNHCR), most have found shelter in Poland and more than 200,000 have reached Hungary.

Slovakia has taken in more than 150,000 people from its embattled neighbour since Feb. 24, when Russian forces began shelling and bombarding Ukrainian cities.

In a phone call with Polish President, Andrzej Duda, UN Secretary-General António Guterres said he appreciated the welcome extended there, to more than one million refugees from Ukraine.

The UN chief “told the President that he will do everything possible to mobilise the whole of the UN system, in coordination with UNHCR, to support Poland’s generosity,” UN Spokesperson Stéphane Dujarric told reporters in New York.

He said Guterres was thankful for the “immense generosity and solidarity shown by all countries” bordering Ukraine.

As part of his overall mediation efforts to try and end the fighting in Ukraine, the UN chief also spoke on Wednesday afternoon with German Chancellor Olaf Schultz, and Josep Borrell, the European Union’s foreign and security policy High Representative.

Latest estimates from UN aid agencies suggest that four million refugees are likely by the end of the war, which represents about 10 per cent of Ukraine’s population.

The development follows news alerts on Wednesday that a Russian strike on a children’s hospital and maternity ward in the stricken city of Mariupol, had left children buried under the rubble, according to Ukrainian officials.

The bombing has not been independently verified, but Dujarric said the UN was urgently investigating the “shocking” reports.

He reiterated the UN’s call for an immediate halt to attacks on healthcare, hospitals, health-workers and ambulances, reminding that “none of these, should ever be a target.”

Any attacks on healthcare, are a clear violation of International Humanitarian Law.

In a tweet, Guterres described reports of the attack as “horrific”, noting that civilians were paying “the highest price, for a war that has nothing to do with them. This senseless violence must stop.”

In a statement, UNICEF chief, Catherine Russell, said she was “horrified by the reported attack…an attack which reportedly left young children and women in labour, buried beneath the rubble of destroyed buildings.

“We do not yet know the number of casualties but fear the worst.”

“This attack, if confirmed, underscores the horrific toll this war is exacting on Ukraine’s children and families” she added. “In less than two weeks, at least 37 children have been killed and 50 injured, while more than one million children have fled Ukraine to neighbouring countries.

According to UNICEF chief, this attack, if confirmed, underscores the horrific toll this war is exacting on Ukraine’s children and families.

“Attacks against civilians and civilian infrastructure – including hospitals, water and sanitation systems and schools – are unconscionable and must stop immediately.

“UNICEF renews its call for an immediate ceasefire and urges all parties to respect their obligations under international humanitarian law to protect children from harm, and to ensure that humanitarian actors can safely and quickly reach children in need.”

Briefing journalists in Geneva, World Health Organisation chief, Tedros Ghebreyesus said that so far, WHO has verified 18 attacks on health facilities, health workers and ambulances amidst Russia’s invasion of Ukraine, including 10 deaths and 16 injuries.

“These attacks deprive whole communities of health care,” he said.

“So far, WHO has delivered 81 metric tons of supplies, and WHO is establishing a pipeline of supplies for health facilities throughout Ukraine, especially in the most affected areas,’’ he said.

The International Organisation for Migration (IOM) said on Wednesday it has helped almost 100 so-called Third Country Nationals (TCNs), stranded in Ukraine during the Russian attack, to return home.

They include 77 Tunisians, forced to flee to Romania and Poland; three Lebanese nationals, and 17 Ghanaian students. Seven other students leave for Ghana on Thursday.

IOM said that around 109,000 TCNs have fled Ukraine since the war began, as the agency collaborates with States, embassies, border authorities, and other partners, to help them return.