Sanwo-Olu: “Security Officer” in the Face of Convoluted Federalism 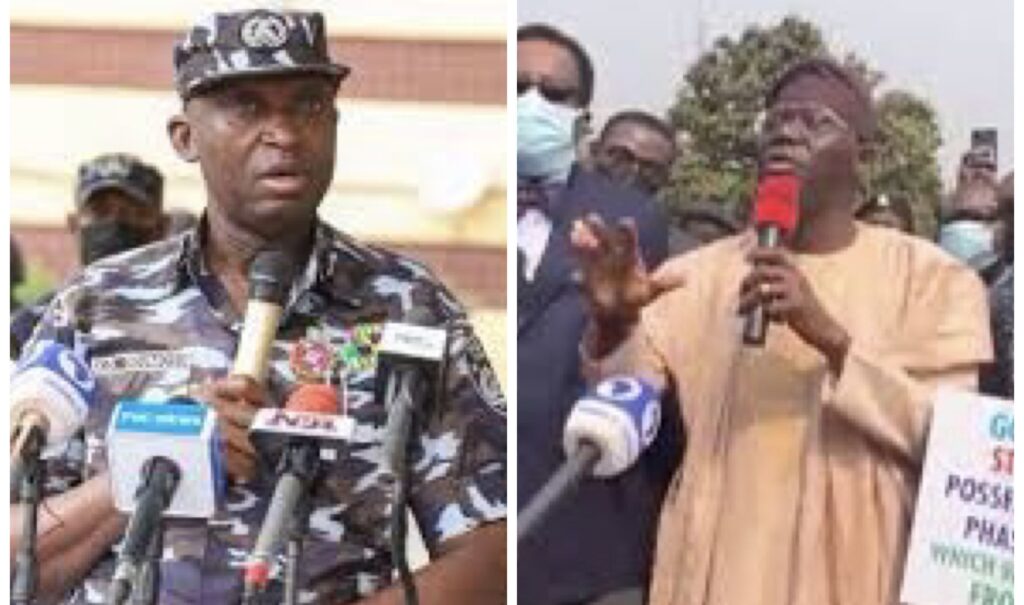 The few minutes of ‘drama’ that took place between Governor Babajide Sanwo-Olu of Lagos and a Chief Superintendent of Police at the Magodo Estate on Tuesday had all the trappings of the very complications inherent in what some people would rather call the “contraption” called Nigeria.

Right in front of members of his cabinet, residents of Magodo, and the hoodlums who had been recruited to invade the highbrow community, the Governor was short of being ‘humiliated’ by the blatant refusal of a police officer to take his men out of the estate and when that failed, to call his superiors whom he claimed had ordered the deployment of the policemen.

“I am the Chief Security Officer of this State,” the governor mouthed what we all know to be on paper but which he knows stops on paper.

The deployment of security men from Abuja, in the first instance, without the knowledge of the Governor of the state, the Commissioner of Police in the same state all present right-thinking Nigerians with a sense of awe in the management of the affairs of the country.

Courtesy of the CSP, we have been told that ‘Abuja’ has interests in the months of tension and instability in a once peaceful abode of many elites in Lagos.

There is a subsisting Supreme Court judgment which allegedly ceded some plots of lands to the aborigines of Magodo. The Adeyiga family, which lays claims to the land, has accused the Lagos State Governor of ignoring the court verdict and went ahead to sell the lands to unsuspecting property developers, individuals and corporate.

What is the genesis of this conundrum? The Lagos State Government, about 1984 and 1985, had demolished structures at the Shangisa Village with a view to preparing the village as an estate. However, the Adeyiga family which approached the court eventually got judgment to effect that 549 plots of the entire stretch of lands should be given to the family.

Decades have passed and the once bushy village has transformed into one of the most priced, elite areas of the state. The family is set to take its pound of flesh.

Setting the facts of the matter aside, the present hullabaloo threatens the peace of Lagos as well as the lifetime investments of many. In the circumstance, a middle-of-the-road arbitration must come into place fast enough for all the parties to be seen to be at peace.

However, the event of Tuesday reopens the unending debate over who provides security in states in the face of seemingly convoluted federalist arrangement that Nigeria runs.

Those who want to claim their plots of land have some backings of ‘Abuja’ according to CSP, who is yet to be identified. And that is part of the unitary system of policing that is in place in Nigeria camouflaged as a federalist arrangement.

Of course, this raises another concern and question over the operational framework of the police in Nigeria. That a detachment of police would move from Abuja down to Lagos where sits a “Chief Security Officer” of the state without any recourse to the authorities in the state amplifies the confusion in the system.

In the process, one of his aides was killed while the men vandalized his residence.

The Governor of Oyo, Seyi Makinde, claimed he was unaware of the presence of any arresting team in his state.

In similar manner, the arrest of governorship candidate of the Action Alliance (AA) in Imo in the last election, Uche Nwosu, was arrested by policemen who stormed a church during service last week to whisk away the son-in-law of former Governor Rochas Okorocha.

The Anglican Commission is demanding from the Presidency a probe and sanctioning of those behind that gangsterism called arrest. And there are many more.

Subtly, the action of the police CSP on Tuesday reminded Sanwo-Olu and others who care to listen that the “Chief Security Officer” toga merely makes Governors toothless dogs which cant bite. Their barking is of no importance.

But here lies the price. Operationally, the police force is endemically steeped in faulty framework. The very reason we should not look further where lies the problem of insecurity nationwide? Nigeria has failed to wash her pot and there should be no need for crying when her food burns.

An operational modus operandi that renders elected officials helpless and hapless in the face of emergencies certainly cannot be the policing strategy needed to nip crisis in the bud. Need we look further why problems are never solved in Nigeria until they blow in the faces of everyone? Here is another instance. God bless Nigeria.