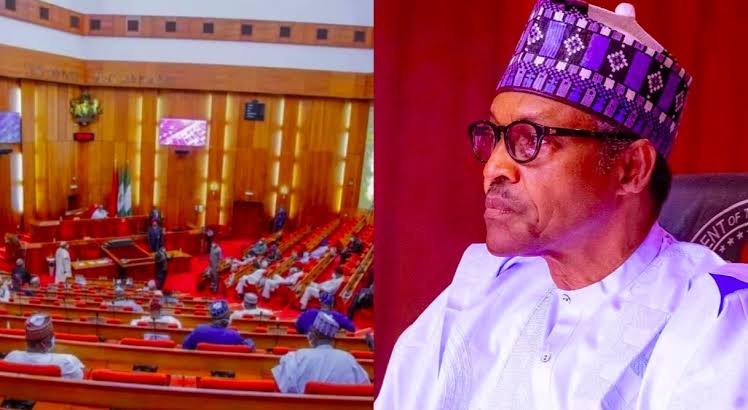 President Muhammadu Buhari’s bid for a further amendment of the Electoral Act was on Wednesday thrown out by the Upper chamber of the National Assembly.

The Electoral Act Amendment Bill failed to scale through second reading on the floor during plenary.

The move to reject the bill was signaled by a call from Senator Adamu Aliero for it to be stepped down after the Senate Leader, Yahaya Abdullahi, moved a motion for the bill to be read a second time.

Aliero, who came under a point of Order, drew the attention of his colleagues to the provision of Rule 52(5) of of the Senate Standing Order.

Order 52(5) provides that, “Reference shall not be made to any matter on which a judicial decision is pending, in such a way as might in the opinion of the President of the Senate prejudice the interest of parties thereto.”

He, therefore, advised the upper chamber to step down consideration of the bill pending the vacation of a court order delivered by the Federal High Court, Abuja, on Monday.

According to the Lawmaker, going ahead with the amendment of the Act was in clear conflict with the sub judice rule in law which prevents the legislature from deliberating or considering any matter already before a court of competent jurisdiction.

“Going ahead to consider the bill obviously will mean that we are disrespecting that order, and this is an institution of the Senate – the symbol of Nigeria’s Lawmaking body.

“We should not be seen to be disobeying the court order. No matter how bad that court order is, we should respect it.

“So, I’m of the opinion that we should stop considering this bill pending the time the court set aside that order, and I think I’m speaking the opinion of my colleagues here”, Aliero said.

The court, in a ruling delivered by Inyang Ekwo, on an ex-parte application by the People’s Democratic Party, barred the President Muhammadu Buhari, the Attorney General of the Federation and the Senate President from tampering with the newly amended Electoral Act 2022.

The Court maintained that the Electoral Act, having become a valid law could not be altered without following the due process of law.

The Senate President, while ruling on Aliero’s point of Order, insisted that the move by the upper chamber to amend the Electoral Act was in line with exercising its Constitutional duties amid following due process.

“To be specific to this particular request, for us in the Senate, it is to look at the request and follow our due process.

“Looking at the request does not mean granting the request. Members of the National Assembly are at liberty to review the request to see if the arguments by the Executive arm of government are convincing enough.

“If the arguments are not convincing enough, the National Assembly can deny the request, and that is how it is. We have no incumbrance from that order.

“So, it is for Senators here to decide to vote for this amendment or vote against it.

“I think we are not breaching any law, in fact, we are trying to promote democracy because to do otherwise may mean that one day someone will go to court and say that the Senate of the National Assembly should not sit.

“I want to appeal to all of us, that we are on the right course and my ruling remains that we are going ahead to consider the proposal which the Leader of the Senate is leading the debate.

“At the end of the debate, we are going to vote, and the vote will decide the fate of the bill.

“I’m sure all of us know that whatever we do here is to protect democracy and the sanctity of the upper chamber”, the Senate President said.

The Senate Leader, was then given the floor to lead the debate on the Electoral Act Amendment bill.

Contributing to the debate, Senator Enyinnaya Abaribe (Abia South), kicked against the deletion of Section 84(12) of the Electoral Act Amendment Bill as requested by President Buhari.

He said, “There are certain things that we see which we think we don’t even have to come here to debate.

“One of those things is the fact that in every democracy, all over the world, there are certain rules which we don’t need to be told about.

“One of those rules is the fact that you cannot be a referee and a player on the same field. It is either you’re a referee or a player.

“So, every other place in the world where democracy is practiced including Nigeria, we don’t need to be told that if we want to run for office, we have to resign. That is a sine qua non that we don’t even need to debate.

“Yet here we are today in Nigeria, and people think they can sit in an office and contest an election and become candidates and continue to sit in that office until the date of election.

“So, how would we continue to debase democracy in this way?

“Mr. President, I think, a cursory look at this paper shows that this paper is dead on arrival. And I urge you my colleagues, to help us to continue to deepen democracy by insisting that this bill not be read a second time in any manner whatsoever.”

Smart Adeyemi (Kogi West), who was also opposed to the consideration of the bill said, “one of the hallmarks of democracy is Justice, Fairness and Equity.

“Indeed, Mr. President, it is a settled matter in law that you cannot be a judge over you own case.

“In any election, where people have the added advantage of holding executive power, either by proxy or directly or by appointment, for such people to have access and compete with others who came from the street, I think is an unjust society.

“Therefore, Mr. President, I disagree with all the arguments on the need to consider a decision that has already been settled.”

A move by the Deputy Senate President, Ovie Omo-Agege, to sway his colleagues was unsuccessful.

The bill, when eventually put to a voice vote for second reading by the Senate President after its consideration, received a resounding ‘nay’ from Senators in the majority across party lines.