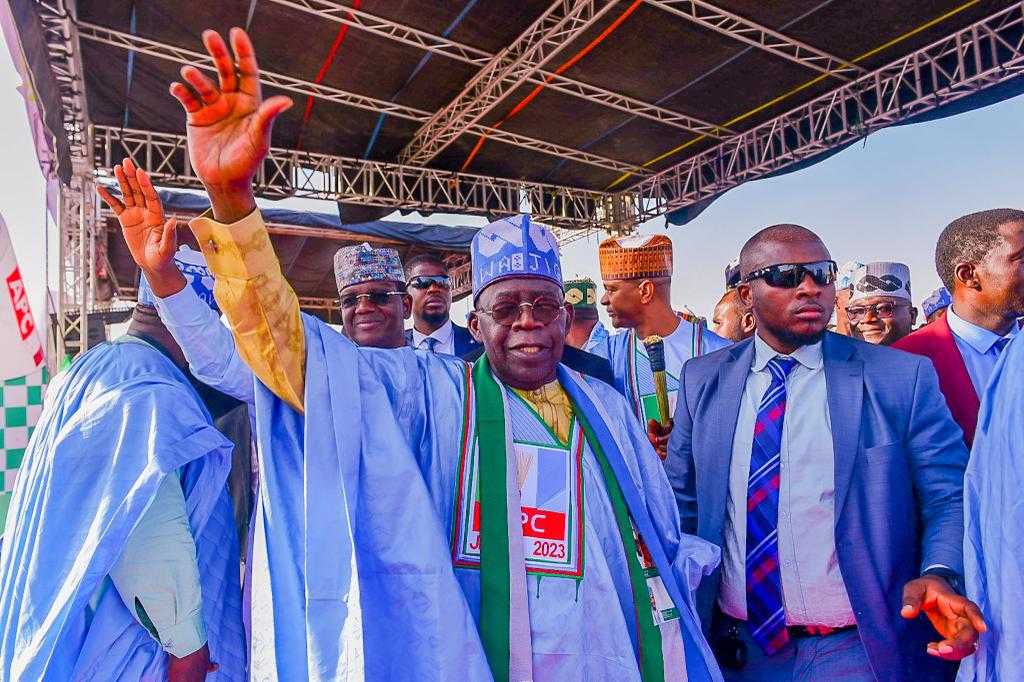 Presidential Candidate of the All Progressives Congress Asiwaju Bola Ahmed Tinubu has urged the people of Jigawa State to vote in responsive and responsible leadership in the upcoming general election and not allow the Peoples Democratic Party back to power.

Tinubu said this when he addressed party supporters who thronged the APC presidential campaign rally held at Mallam Aminu Kano Triangle, Dutse in their large numbers.

He said having voted out the “jackals and hyenas” in the PDP administration in 2015, it would be disastrous to give them another opportunity back to power again.

He said: “You did the courageous job of chasing away the locusts eight years ago, do not trust their deceptive promises. Do not let them back into power. Like locusts, they will devour everything in their path!

“Instead, vote for the people that have a track record of delivering prosperity to the people. We did it in Lagos and Borno, and with your help we will do it again for Nigeria. Vote for the people with the vision, the capacity, the competence and the integrity to do what is right.

“Vote for responsive and responsible leadership. Vote for us. Vote for the APC on February 25 and March 11.”

He said his administration would build on the achievements of President Muhammadu Buhari and bring the country to flourish.

Speaking on his administration’s plans, Tinubu promised to revamp the agricultural sector, while also giving great attention to developing infrastructure across the country.

“The vast arable land in Jigawa will be activated to make this state a place to reckon with in agro-business and agro-allied industries.

“We will build upon the gains already recorded in agriculture in this state. We will invest in the expansion of irrigation and water management systems to increase productivity and reduce the impact of extreme weather, drought and flood cycles on crop yields.

“Our initiatives will ensure Jigawa farmers can cultivate their lands all year round,” he added.

He also said, “If you elect me, I will consolidate the ongoing infrastructural revolution by networking our entire country with good roads that would spur development. We will use the road network to connect our major agricultural and industrial hubs.”

Like in all his campaigns, the APC candidate stated the importance of securing the nation for economic growth, promising to provide all critical security agencies with all they require to secure the nation and make it habitable for Nigerians.

He added, “Most importantly of all, we will secure our nation and defeat the menace posed by evil criminals, kidnappers, bandits and terrorists. We will sweep them away. Broom!

“We will do so by recruiting and deploying more security personnel across the various agencies, improving their equipment and training and deploying top shelf technology to improve ground and aerial surveillance in key and dangerous areas.”

Overwhelmed by the tumultuous crowd, Asíwájú Tinubu thanked them every turn, saying ‘Nagode, nagode, thank you, thank you.”