‘The biggest nuclear plant is on fire’: Zelensky 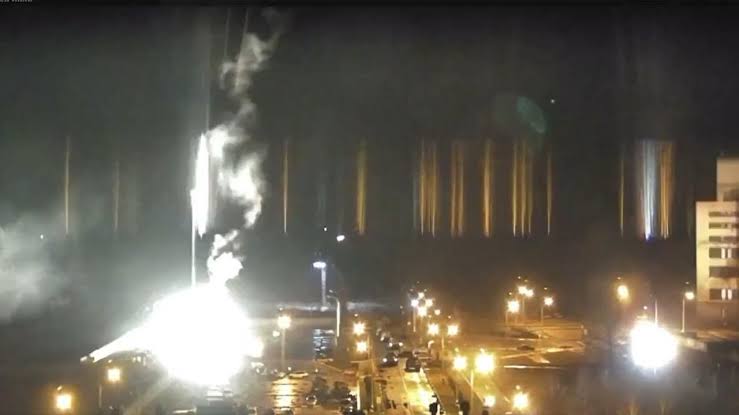 Slowed down security camera footage from the Zaporizhzhia nuclear plant appears to show a fire at Europe’s largest nuclear facility.

According to Mayor Dmytro Orlov of nearby Enerhodar: “Continuous enemy shelling of [the plant’s] buildings and units” seemed to cause a fire at the nuclear station.
As we’ve been reporting, Ukraine’s president is urging “immediate action” from the world amid Russian attacks on Europe’s largest nuclear plant.
“The biggest nuclear power plant in Europe is on fire right now,” Volodymyr Zelensky said in a video posted on Twitter.
He accused Russians of deliberately shooting at the Zaporizhzhia plant’s six reactors using tanks equipped with thermal imaging.
Invoking the “global catastrophe” at Chernobyl in 1986, he warned the consequences of a meltdown at Zaporizhzhia would be far worse.
“Europeans, wake up please. Tell your politicians that Russian forces are shooting at the nuclear plant in Ukraine,” he begged.
Zelensky said he had been in touch with leaders from the US, UK, EU, Germany and Poland, as well as the International Atomic Energy Agency, but called on ordinary citizens to raise alarms with their own politicians too.
“Russian propaganda has warned in the past that it would cover the world in nuclear ash. Now this isn’t just a warning, this is real.”
BBC