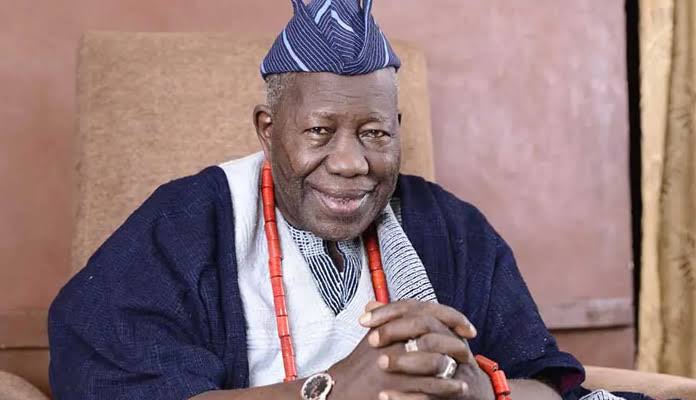 Tributes have started to pour in as Nigerians react to the death on Sunday of one of the nation’s prominent paramount ruler, the Olubadan of Ibadan, Oba Saliu Adetunji.

Adetunji passed on this morning at the University College Hospital, Ibadan, the Oyo State capital.
Among those who have expressed grief are Governor of a leader of the All Progressive Congress, Bola Tinubu; Governor of Oyo State, Seyi Makinde and the Postmaster General of the Federation, Adebayo Adewusi.
In a condolence message released by his Media Office and signed by Mr. Tunde Rahman, Asiwaju Tinubu said: “I received the news of the transition of highly-referred royal father, the Olubadan of Ibadanland, Oba Adetunji Saliu, Aje Ogungunniso I, with sadness. Kabiyesi passed on at a ripe age of 93, which we are extremely grateful to God for. But this demise has robbed us of his wisdom and wise counseling. He never withheld his deep insights and rich perspectives from those who sought his guidance.
“Particularly coming shortly after the death of another top ranking traditional ruler in Yorubaland and precisely in Oyo State, this passing truly rankles. The late Olubadan was a sage. He was humble, humane, mature, calm and decent, always a symbol of unruffled dignity.
“Before he mounted the throne, Oba Adetunji had made his name as a successful businessman and music and entertainment promoter who contributed a lot to uplift the careers of many top musicians in the land, thus contributing his quota to the growth of our country’s economy.
“On the throne, the late Olubadan worked assiduously for peace and stability of not only Ibadanland, Oyo State and Yorubaland, but also the entire country. He superintended over the ancient city with even-handedness.
“I had a close personal relationship with Kabiyesi and I will deeply miss him. My condolences to his family, particularly the Oloris, Mogajis and the princes. May God Almighty comfort them.
“I commiserate with Governor Seyi Makinde, the government and people of the state who would now have to endure the demise of another top traditional ruler barely three weeks after the passing of the Soun of Ogbomosoland, Oba Jimoh Oyewumi, Ajagungbade 111.”
Also, Postmaster General of the Federation and Chief Executive Officer, Nigerian Postal Service, Dr. Ismail Adebayo Adewusi, condoled with the people of Ibadanland and the Oyo State as a whole over the demise of the Olubadan.
Adewusi, in a statement on Sunday, said the reign of the monarch witnessed tremendous progress for Ibadanland and Oyo State in general.
Describing Oba Adetunji as a successful entrepreneur, Adewusi said that his landmark achievements in the area of commerce, entertainment are worthy of emulation.
He said the late Adetunji pioneered businesses and nurtured them to great success.
“He was a man of means. He ventured into businesses where other were afraid to step in. But he made great successes out of them. By the time he ascended the throne in 2016, Oba Adetyunji had emerged as one of the most successful businessmen in Nigeria,” Adewusi said
As for his reign, the NIPOST boss said Oba Adetunji displayed huge capacity for bringing different and conflicting interests in the ancient city together.
“He reign witnessed stability and progress. On behalf of the entire Board and management of NIPOST, I commiserate with the people of Ibadan and Oyo State in general. May the soul of Olubadan find favour with his Creator,” Adewusi prayed.
A member of the House of Representatives, Tolulope Akande-Sadipe, while mourning the Olubadan, described him as a brave and courageous leader.
She said, Oba Adetunji was a successful businessman and first class traditional ruler.
Akande-Sadipe’s condolence message was contained in a statement issued in Ibadan today by his Media Aide, Olamilekan Olusada.
She noted that the late monarch led his people with utmost diligence and unassuming dedication, commending his strong adherence for peace, progress and development.
Hon. Akande-Sadipe who chairs the House Committee on Diaspora added that the late monarch would long be remembered in the annals of Ibadan and Oyo State for being an exemplar in virtually all facets of life.
“On behalf of my constituency, I extend my condolences to the good people of Ibadan land, the Olubadan-in-council, and the immediate family members of the late Oba Adetunji”, she said.