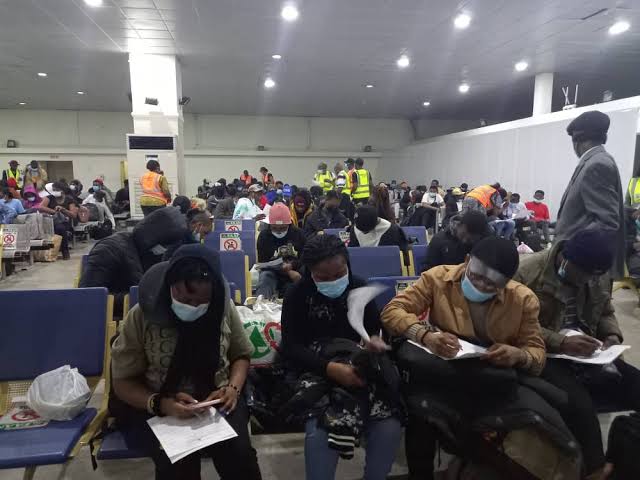 Ukraine: 306 Nigerians Arrive From Hungary
The fourth batch of 306 Nigerians fleeing from the war in Ukraine has arrived at the Nnamdi Azikiwe International Airport, Abuja from Budapest, Hungary.
The evacuees arrived via Air Peace Airline at 12:35 a.m on Sunday.
The stranded Nigerians were successfully evacuated following the intervention of the Federal Government with the cooperation of governments of countries neighbouring Ukraine.
Welcoming the returnees on behalf of the Federal Government, Mr Mustapha Ahmed, Director-General, National Emergency Management Agency (NEMA), said that President Muhammadu Buhari had approved that $100 be given to each of them.
Ahmed, represented by Air Commodore Edward Adedokun, Director, Search and Rescue, NEMA, added that the money was meant to assist them with their transportation to their various locations.
He said that a one-night accommodation arrangement had been made for the returnees to rest before continuing their journey to their homes, while those whose relatives had come for them were free to go home.
NEMA staff, along with representatives of other agencies involved in the reception at the airport, were on ground to receive the returnees.