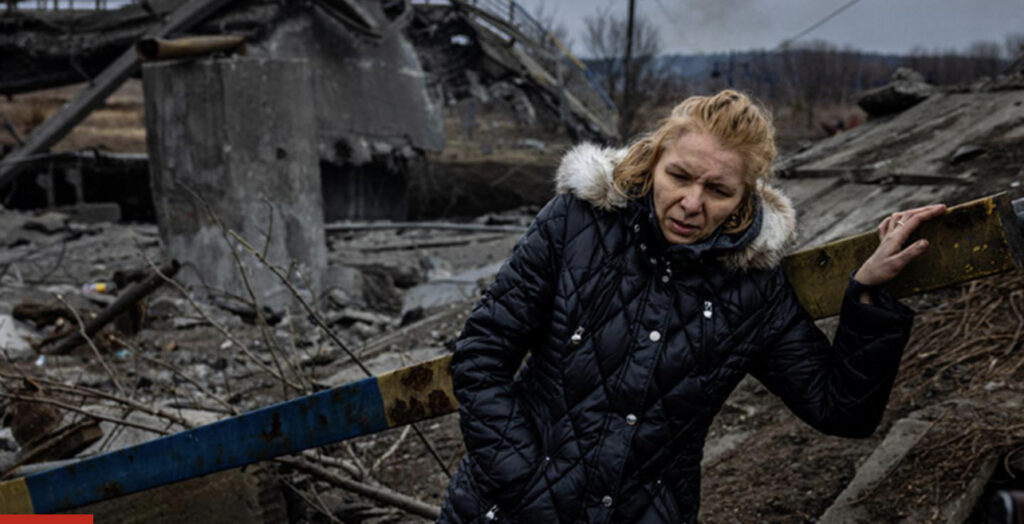 President Volodymyr Zelensky has said everyone who commits atrocities against Ukraine’s civilians will be punished.

He said Ukrainians would not forgive or forget, and accused invading Russian troops of deliberate murder.

“There will be no quiet place on Earth for you. Except for the grave,” the president said.

Ukrainian officials say Russia is striking civilian targets around the country, including hospitals, nurseries, and schools.

But Russia denies targeting civilians, saying it is carrying out a “special military operation” against Ukrainian “nationalists” and “neo-Nazis”.

Ukraine’s Deputy Prime Minister Olha Stefanishyna told the BBC that, after “strong resistance” from the Ukrainian army, there was an “enormous operation” by Russia against civilians.

On Sunday alone, a family of four were killed when Russian forces fired shells at people fleeing the conflict in the town of Irpin, north-west of Kyiv.

And in the port city of Mariupol, promised evacuations were cancelled on both Saturday and Sunday amid fresh attacks.

The city is now in its sixth day with no running water, no power, and no sanitation. Food and water are fast running out.

Moscow announced it would open new evacuation corridors at 09:00 local time (07:00 GMT) in Mariupol and other cities. However, the routes published by Russia’s RIA Novosti news agency show some of the corridors end in Russia and Belarus.

The corridor from Kyiv will lead to Russian ally Belarus, and civilians from Kharkiv will only have a corridor leading to Russia.

Corridors from the cities of Mariupol and Sumy will lead both to other Ukrainian cities and to Russia, the AFP news agency reports.

In a video address to mark the Orthodox Church’s Forgiveness Sunday, Mr Zelensky said that instead of forgiveness there would be a day of judgment.

He said Russia had announced shelling of defence targets which were built in cities in Soviet times.

“Thousands of people work there. Hundreds of thousands live nearby. This is murder. Premeditated murder,” he said.

He also condemned Western governments for failing to speak out against the plan.

The World Health Organization said health facilities were being attacked, with its director-general Tedros Adhanom Ghebreyesus saying they had caused “multiple deaths and injuries”.

The British government has accused Russia of targeting populated areas “in multiple locations”, noting in an intelligence update that it had “previously used similar tactics in Chechnya in 1999 and Syria in 2016”.

On Sunday, UN monitors said 364 civilian deaths had been confirmed in Ukraine since the invasion began on 24 February, but the real figure was likely to be “considerably higher”.

The UNHCR said more than 1.5 million people had fled Ukraine since Russia invaded.

Ukraine’s Deputy Prime Minister Olha Stefanishyna – who was speaking to BBC TV’s Sunday Morning programme – accused Russia of “military tactics right in the cities of Ukraine”, adding they were carrying out a “terroristic plan”, with attacks coming from the air and also by land.

“Shelled hospitals, the shelled houses for kindergartens and schools, and the ordinary households,” she said. “This is how the reality looks.”

She said Ukraine was seeing “another wave of implementation of this terroristic plan of [the] Russian Federation”.

Ms Stefanishyna claimed Russia was suffering “enormous losses” of soldiers and equipment, but this “does not deter Russia”.

“It only encourages further aggression,” she said.

Attacking civilians and civilian infrastructure – such as schools and hospitals – is against the Geneva Conventions, which are treaties agreed by all countries that are supposed to regulate war.

As well as the WHO, other non-government organisations have also reported attacks on civilian targets.

Amnesty International says it has verified various attacks – including cluster munitions hitting a kindergarten and nursery, and a ballistic missile hitting a hospital.