Ukraine Conflict: Biden Says he is Convinced Putin has Decided to Invade 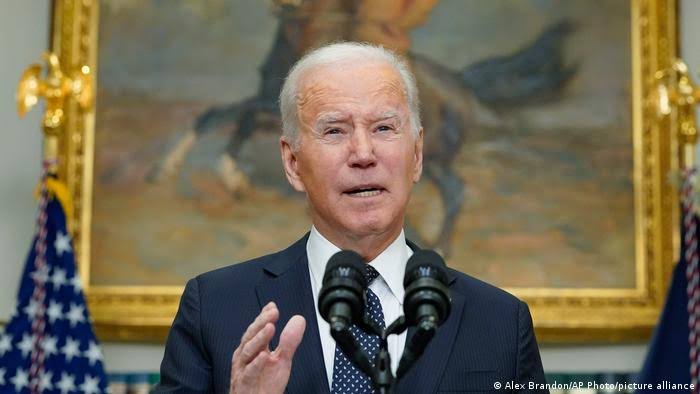 US President Joe Biden has said he is convinced Russian President Vladimir Putin has decided to launch an invasion of Ukraine, and that an assault could happen in the “coming days”.

Mr Biden said the assessment was based on US intelligence, which suggested the capital Kyiv would be targeted.

Russia denies it is planning to invade.

Western countries fear Russia is trying to stage a fake crisis in breakaway eastern regions of Ukraine to give it a reason to launch an offensive.

The US estimates there are 169,000-190,000 Russian personnel massed “in and near Ukraine”, a figure that includes Russian-backed fighters in the self-proclaimed republics of Donetsk and Luhansk in eastern Ukraine.

In a televised address from the White House, President Biden said the US had “reason to believe” that Russian forces were “planning to and intend to attack Ukraine in the coming week, in the coming days”.

“As of this moment I am convinced that he has made the decision,” he added, referring to President Putin. Previously, the president and his top officials have said they did not know whether this was the case.

But, he said, Russia could “still choose diplomacy” and that it was “not too late to de-escalate and return to the negotiating table”.

Earlier on Friday, in another sign of rising tensions, leaders of the two separatist areas announced an evacuation of residents, saying Ukraine had intensified shelling and was planning an attack.

Ukraine has repeatedly said it is not planning any attack, and Foreign Minister Dmytro Kuleba dismissed what he described as “Russian disinformation reports”.

Hundreds of thousands of people live in the region, and such evacuation would be a huge undertaking. There is no indication that a mass evacuation is imminent, but Russian state media did report that several buses carrying local residents had made their way to Russia.

Denis Pushilin, head of the Donetsk People’s Republic (DNR), announced the evacuation in a video purported to have been filmed on Friday. However, a BBC analysis of the metadata showed it was recorded two days ago, before the flare-up in hostilities.

The Kremlin said President Putin had ordered that refugee camps be set up near the border and “emergency” aid paid to people arriving from the separatist areas.

Russia has been backing an armed rebellion in Ukraine’s eastern Donbas region since 2014. About 14,000 people – including many civilians – have died in fighting.

US Secretary of State Antony Blinken said events over the past 48 hours were part of Russian efforts to create “false provocations” to justify further “aggression”.

The US state department later called the announcement of evacuations a “cynical” move by Moscow “to distract the world from the fact that Russia is building up its forces in preparation for an attack”. White House press secretary Jen Psaki said the evacuations were an example of Moscow using misinformation as a pretext for war.

On Friday night, Ukraine’s military intelligence service said it had received information that explosives had been planted at infrastructure facilities in Donetsk in preparation for a so-called false flag attack – an operation carried out with the intention of blaming an opponent for it.

“These measures are designed to destabilise the situation in the temporarily occupied areas of our country and create a reason to accuse Ukraine of committing terrorist acts,” the Ukrainian Defence Ministry’s Main Intelligence Directorate said on Twitter.

Earlier, separatist authorities said a parked jeep had been blown up near a government building in Donetsk. US and Ukrainian officials said it was a staged attack designed to stoke tensions.

Mr Putin, meanwhile, said the situation in eastern Ukraine was deteriorating. At a news conference, he made unsubstantiated accusations of “mass and systematic violations of human rights” and enshrining in law “discrimination of the Russian speaking population” in Ukraine.

He said he remained willing to discuss the crisis with Western leaders, but accused them of ignoring Russia’s security concerns, and warned that any deal must include a legally binding pledge that the Nato security alliance will stop its eastward expansion.

The announcement by Denis Pushilin that women, children and the elderly will be evacuated to Russia is, potentially, a very troubling development.

The idea that an evacuation is needed because Ukraine is planning an attack on the two Russian-backed self-proclaimed republics of Donetsk and Luhansk is baseless.

With a vast chunk of Russia’s military might positioned around Ukraine’s borders, such an attack would be an act of lunacy. It is, quite simply, unthinkable.

But the separatists, and Moscow, want to create the impression of imminent danger. Yesterday, the Kremlin spokesman, Dmitry Peskov, said the situation around Russia’s borders could ignite at any moment.

President Putin this week repeated his allegation, entirely without foundation, that Ukraine was responsible for genocide in eastern Ukraine.

With Western leaders warning of possible “false flag” operations, and crudely made videos circulating on the internet purporting to show Ukrainian saboteurs at work, these are dangerous moments in a crisis that already feels dangerous enough.