Why I Didn’t Interfere With Assembly’s Fiasco – Oyebanji 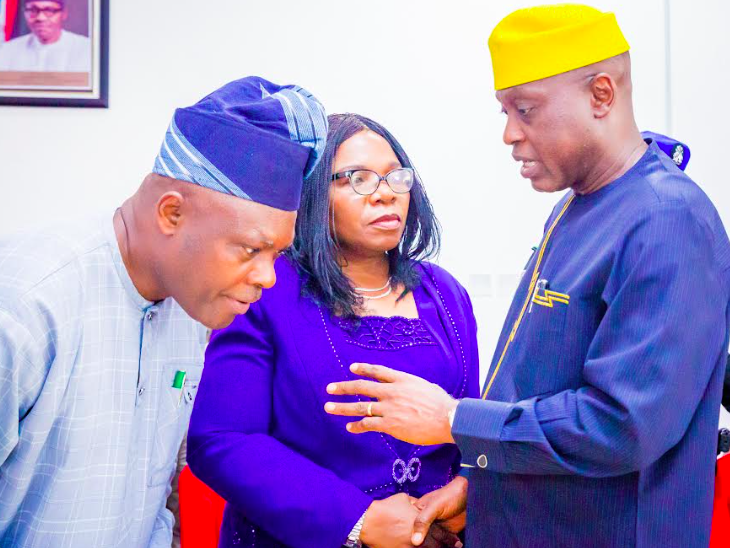 Ekiti State Governor, Mr Biodun Oyebanji has reiterated his commitment to the rule of law and separation of powers affirming that he did not interfere in the affairs of the State Assembly nor had a preferred candidate for any leadership position of the House.

The Governor, who stated this on Tuesday when the new Speaker of Ekiti State House of Assembly was officially presented to him by the APC leadership in the state led by the party chairman, Barr. Paul Omotoso at the Governor’s office, noted that it was inappropriate for jim to meddle with the activities of the Legislators, adding that as the Chief Security Officer of the state, he was saddled with the responsibility of ensuring protection of lives and property.

Mr Oyebanji expressed his appreciation to the leadership of the APC in the state for resolving the family disagreement saying it was not a crisis because democracy comes with strains and stresses as well as internal mechanism for resolving them which , according to him, the party has used effectively.

He commended members of the House for demonstrating that the confidence their constituents and the leadership of the party reposed in them was not misplaced, assuring them of government support at all times.

The Governor used the opportunity to remind the new Speaker of the budget that was still with the House of Assembly appealing for speedy passage of the bill.

“My comment begins with an appreciation to the party leadership for resolving this family disagreement, its not a crisis, democracy comes with strains and stresses, their contestations, their disagreements but the beauty of democracy is that there are in-built mechanism to resolve it.

“And that is what has played out. APC is one, I’m a loyal member of this party, APC gave me the platform to stand on, without APC, I will not be here today.

” What I have done as your governor is to ensure that I protect lives and property and that is within my power as the governor of this state. I have not interfered but I’m happy with the outcome. As progressives, we have a culture and the culture is respect for the leadership.

“And Madam Speaker, our budget is before the House of Assembly and we are working so hard to ensure that we deliver on our promises to Ekiti people but we cannot violate extant rules and regulation. I am appealing for a speedy passage of the budget.

” There are lots of things we ought to have brought before the honourable House but we are waiting for the passage of the budget”.
“While congratulating the new speaker, I will just plead with the party chair to bring in everybody and for the first time, I will have to quickly respond to all the insinuations on the social media on what has happened in the House of Assembly, it’s a family affair and as a family we would resolve it. He said.

Earlier, the Speaker, Rt. Hon. Bunmi Adelugba noted that there was no rancour within the state House of Assembly and expressed her appreciation to the party chairman for the role he played in ensuring that the party decisions were adhered to.

Rt. Hon. Adelugba said further, “All along, everyone refer to Ekiti State House of Assembly as the most peaceful, dutiful with particular mention of the number of bills that we have passed as we don’t joke with our legislative activities.
While appreciating the Governor for not interfering in the internal affairs of the Legislators, the new Speaker pledged the unflinching support and allegiance of the entire members of the House to the party as well as continue to support the Governor and the government of the state to move the state forward to achieve the laudable promises made to the people.

She promised to ensure speedy passage of 2023 appropriation bill.

Formally presenting the new Speaker to the Governor, the Chairman of the party, Barr. Paul Omotoso revealed that the Governor blatantly refused to meddle with the affairs of the House because of the fact that he had no choice candidate among the members saying it was strictly party affairs.

Barr. Omotoso commended the Legislators for demonstrating maturity in choosing the person they believed could lead them effectively adding that the party was ready to pally with the new Speaker, members of the House as well as the government to achieve desired results.

The meeting also had in attendance the Deputy Governor, Chief (Mrs) Monisade Afuye, Deputy Speaker of Ekiti State House of Assembly, Rt. Hon. Hakeem Jamiu; Secretary to the State Government, Dr (Mrs) Habibat Adubiaro; Chairman of APC in the state, Barr. Paul Omotoso and his state exco; members of the State Executive Council; 18 members of the State House of Assembly and APC Chairmen of the 16 local government areas.