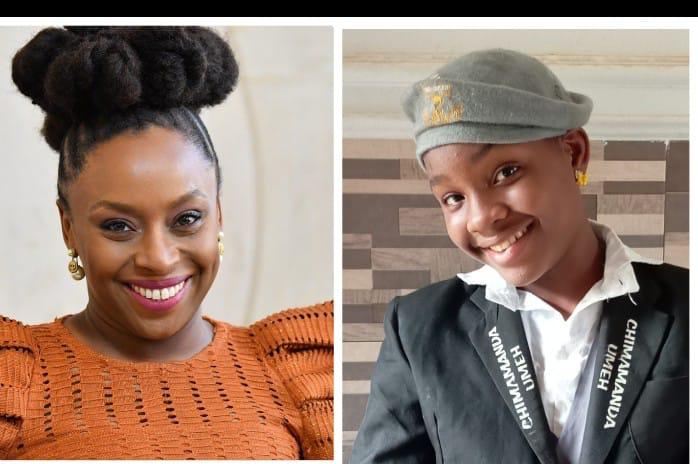 Chimamanda Umeh, a 13 years old student of the Federal Government College Ijanikin Lagos, (FGCL) has released her first book titled: ‘THE TWINS OF IHAZI’.
Umeh, who spoke in an interview with the News Agency of Nigeria (NAN) in Abuja on Monday, said she was inspired by the literary icon Chimamanda Adichie, from who she had drawn the inspiration to embark on her first literary voyage.
According to Umeh, ‘The Twins of Ihazi’ is my first book and I hope to build on this initiative untill I attain God’s desired heights in my pursuits.
“I am the first child in a family of five, and I must say that I began to grow interest for literary work even from my nursery school.
“I remember that even as a nursery school pupil , I would recite my nursery rhymes from home till I get to school and even create my own lines different from what I was taught .
“My mother will often laugh at my remix of popular poetry but the truth is that I love literature including all its genres and I thank God for helping me realise my first work,” she said.
On her admiration for Adichie she said her mother named her after the respected Adichie, saying her mother made this known to her in primary school due to her love for poetry and drama.
“As a child, I had not seen Adichie’s photo before, but when I finished my primary education and got into junior secondary, I came in contact with one of her novels, “We should all be feminists” in my mum’s library.
“I read the book and I felt happy that I did, but my mum didn’t know that I read the book until I mentioned some lines in the book to her amazement ” she said.
She also said that she had also watched Adichie deliver speeches on television with her exemplifying bravery, adding that she also hopes to make a big footprint like her idol.
“Well, we all have people who motivate us one way or the other and I can proudly say that I am motivated and inspired by Adichie and I desire to meet this my idol someday,” she said.

CIA museum: Inside the world’s most top secret museum

Abuja to Host Beauty Pageant for the Deaf

Nigerian Play, Wedlock of the gods Goes on Stage in US University on October 1