A Lawmaker and Burden of Intra-Party Strife 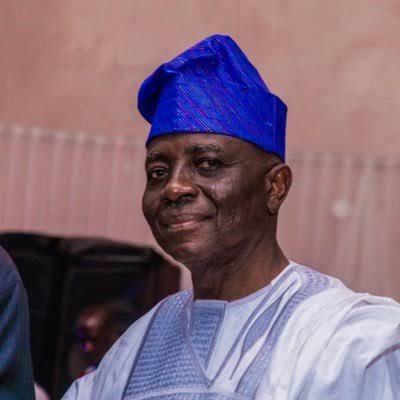 In the build-up to the 2023 general elections, Senator Adelere Oriolowo, a first term Senator representing Osun West Senatorial District in the upper chambers of the National Assembly, is about having a personal face-to-face encounter with one of the factors constituting a cog in the wheel of Nigeria’s democratic progress.

In his ongoing bid to return to the Senate for a second term next year, the Senator is thinking less of squaring up with opposition parties in the election scheduled for February 2023. What stands between the Senator and his second term interest is rather internal competition in the APC that he belongs.

No fewer than four persons from his immediate Federal Constituency have indicated interest to slug it out with him for APC’s Osun West’s Senatorial ticket. The rationale on which the ambition of other APC senatorial aspirants for Osun West is premised is saddening because it is not based on the need to raise the bar of representation of the constituency but solely on self-interest.

For instance, an aspirant among those angling to dislodge Oriolowo is reported to have said, “As for the allusion to the performance of the incumbent Senator or his acceptability by the people and the party, I won’t be dwelling on that.”

The attempt by the party faithful to dislodge an incumbent office holder from the same party is strange as it is also unhealthy for party supremacy and overall success of the party at the polls.

We can take a cursory look at the democracies of advanced countries such as the US and the UK. Instances of exceptions, which are very rare, arise where an incumbent is considered to have performed abysmally or acted in gross misconduct in the course of his public service. It is on that premise that the person in question is advised to step down on his own in order to save the face of the party he belongs. The best practice across the world, especially where public office is about service to the people, is that a serving representative reserves the right of first refusal.

There is no doubt that one of the beautifying ingredients of democracy is found in its competitive nature, which affords the people the right to freely choose their representatives or leaders. Even so, party politics, which enhances organizational competition, conventionally frowns at unnecessary bickering within a political party because it is suicidal as it could lead to party’s failure at inter-party competition arena.

When a party is the architect of its misfortune, the essence of having a single fold for party men and women to drive their political interest and activities in the larger politics of the society is defeated. In a nation like ours where politics is played along party lines, nobody, however intelligent, influential or sophisticated, becomes anything within the political system without the party.

That is why party interest supersedes personal interest in the struggle for political power. This explains why the good performance of a party man or woman in public is a pride to the party. It is for this reason that a party defends its own when another segment of the public, driven by inter-party animosity , tends to cast aspersion on the performance of the party person in public office. That is why a party as a body does not embark on a search for the replacement of its party person in public office under the illusion that another party person would better the best already achieved by the current person in office. It is conventional wisdom that you don’t change a winning team or person.

However, it is quite unfortunate that party supremacy and cohesiveness has been nose-diving across board since the return to democracy in Nigeria in 1999. This alien and poor political culture is not only puzzling, bizarre and absurd, it has also taken our political development on the path of retrogression instead of progression.

The ugly trend has reared its face in Osun politics as experienced by Governor Oyetola.Though the Governor has overcome the challenge as he emerged the governorship candidate of the APC in his second term election coming up in February 2023, the wounds inflicted in the process of internal wrangling are yet to heal. And if the injuries are not well treated by the party, it could have a boomerang effect on Oyetola’s second term election.

While the rivalry trailing APC’s governorship primaries was feverishly festering, Senator Oriolowo, though neutral, was on the side of the party because he cherishes cohesion in party politics as elucidated above. Unfortunately, following his school-mate background with one of the arrow-heads in the political face-off, some persons, either as a result of deliberate or uninformed stance, misconstrued the Senator’s neutrality to have meant taking sides. What the Senator is not ready to do because of politics is to erase history and those he has come across in his trip in life so far.

Uncomfortable and desirous of ending the unhealthy bickering at the top echelon of Osun APC as Senator Oriolowo has been, the prodding for 2023 general elections, which he is seeking a second term, has brought his own share of the damaging political culture to his doorstep.

The few cases of ranking lawmakers in Nigeria since 1999 can attest to the beneficial effects of having ranking legislators. Senator Ahmad Lawan has been in the National Assembly since 1999. Hon. Femi Gbajabiala has also been a federal lawmaker since 2003. Apart from the fact that the two distinguished lawmakers are currently presiding over the Nigerian Senate and House of Representatives respectively, time-tested projects have been attracted to Yobe North and Surulere Federal Constituency in Yobe and Lagos States respectively.

However he goes about navigating his way through the voyage of unnecessary intra-party struggle for the APC’s ticket for Osun West Senatorial District, Oriolowo needs to be in tune with the fact that it is another round of leadership burden that comes his way in the course of representing his people.
On October 24, 2020, during the EndSARS protest across the country, his houses in Iwo, his country home, were invaded and several properties worth millions of naira were destroyed by hoodlums who were in a purportedly in search of non-existent COVID-19 palliatives. His commercial farms established since 1982 at Odo-Oba and Alagbede were also destroyed.

That was a negative payback to Senator Oriolowo, who has never been assigned a role by any government for sharing relief materials of any kind to people. Yet he initiated and distributed assorted food items to people of Osun West Senatorial District during the 2020 lockdown occasioned by COVID-19 pandemic among other selfless interventions.

The losses he suffered remain an unworthy example of rewarding a representative that doggedly fought and succeeded in facilitating the siting of the Federal College of Education and National Library at Iwo, with the contruction of the latter now completed.
He is also instrumental to construction of an ICT centre in Iwo Grammar School, which is a flagship project that will be replicated in the other federal constituencies. He also established three Farm Estates in the three federal constituencies in the Senatorial District and is currently working on modalities for the establishment of the Institute of Tractorization and Agricultural Practices. A number of other capital projects that are of life-time benefits to Osun West senatorial district have also surfaced as fruits of his phenomenal representation.

While all good lovers of effective and efficient representation should urge Senator Oriolowo not be distracted by unwarranted party contention, the APC in Osun should beware of internal wrangling that portends grave danger for the party. Let the party not score itself wrong by replacing those who have been good ambassadors for the party at the national level.

#Adedimeji, a Barrister-at-Law, is a Senior Legislative Aide with the National Assembly Service Commission, Abuja and