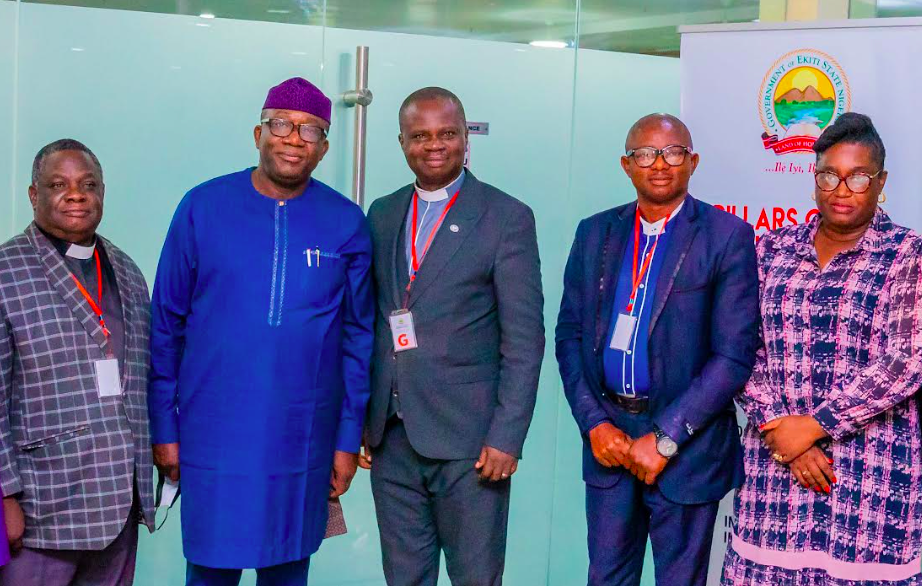 Governor of Ekiti State, Dr. Kayode Fayemi, has described the decision by the All Progressive Congress to go for a Muslim-Muslim ticket as a political strategy.
He said the decision is not to undermine Christianity.
Fayemi stated this in Ado-Ekiti on Friday during a courtesy visit by the new executives of the Christian Association of Nigeria (CAN), Ekiti State Chapter led by its Chairman, Dr. Emmanuel Aribasoye.
He said the choice of a Muslim running mate for the APC Presidential candidate was not because there were no competent Christian politicians from the North as being erroneously peddled in some quarters.
While adding that there are so many competent Christians in the North and all over Nigeria, the Governor noted that the responsibility of the church where social justice is being preached should include looking at the challenges being faced by Christians and seeking how good governance can address and improve upon them.
He urged Christian leaders to eschew what he called “the theology of disengagement” and embrace politics by converting the current challenge to an opportunity to present a charter of demands to all political candidates based on irreducible minimum conditions acceptable to Christendom. “Many Christians see politics as a dirty game, and for this reason are disengaged from the political process. It’s time for us to realize that there are compelling reasons for Christians to participate in politics. In my own opinion, whatever makes us good Christians makes us good citizens.”
“You raised a matter that is agitating the minds of many Christians particularly Christians who are not in politics but I can tell you that Christians who are in politics are equally concerned about the matter you have raised about the Muslim-Muslim ticket. Not so much because of faith but because of fair representation and representation in a multi ethnic, multi religious, multi- cultural setting is always going to be an issue of concern. But I have also had cause to discuss this with our political associates and our fathers in the Lord.
“But where we are now, my plea with Christians is to do that which is expected of us. Yes, the agitation must continue and on my part as a Christian, I have been talking to both the Presidential candidate and other leaders of the party that we need to take quick steps that we should have taken earlier by approaching the leadership in Christendom and explain the context of the selection that was about to happen. Even if they don’t agree with our choice, they would have seen the sincerity of purpose and understood that the decision was not on ground of competence because we have competent Christians all over Nigeria but on grounds of strategic political moves, which is what we do in politics. We have to look at scenarios and calculate where the votes would come from, it is a game of numbers.
“I think it is time for Christians to move away from the theology of disengagement – the notion that politics is dirty and that it is not for a child of God. When serious Christians committed to the ideals of social justice and the common good turn away from politics, they open the door for unprincipled opportunists to take power. Fortunately, not all of us can or will be in elective office. Not all of us have to. What matters is for each of us to find our place in the move to build our nation and be faithful to the demands of that task.
The Christian leadership should use this current challenge as an opportunity to present a charter of demands to all political candidates, especially our party (APC), outlining the irreducible minimum conditions acceptable to Christians in the next political dispensation. A charter of demands that would represent those values you preach to us in church highlighting our concerns, stressing the place of Christendom in the Nigeria project and then placing our demands before the political leaders. I want the Church to organise debates around issues of concerns among all the candidates”. He stated.
This, he said, would bring out some advantages for the Christians in the current arrangement, rather than flogging the issue of Muslim-Muslim ticket. “While it is desirous to see one of us on either side of the presidential ticket, I think it is important for us to look beyond the religious profession of the gladiators or even their ethnic or geopolitical origin.”
Speaking further, Dr Fayemi commended CAN for its role in promoting peace and harmony both at the state and national levels and urged the association not to relent in its prayer for the peace of the country.
Earlier, the new Chairman of CAN in the state, Dr Aribasoye who had commended the Governor’s generosity to CAN in Ekiti and his spirit of sportsmanship in stepping down for Asiwaju Bola Ahmed Tinubu at the APC Convention, as a welcome development, however said the church was not in any way comfortable with the Muslim-Muslim ticket of the ruling party, describing it as a “cause for concern”
Dr Aribasoye gave kudos to Dr Fayemi administration for his giant strides in the state which included quick response to security challenges which had culminated into frequent arrest of criminal elements in the state, extensive infrastructural and educational development as well as his personal sponsorship of pilgrims to Holy lands.
He also highlighted some of the achievements of the administration to include prompt payment of workers’ salaries, construction of International Cargo Airport and peaceful conduct of Governorship election in the state. Dr Aribasoye used the occasion to invite the Governor to the National Convention of CAN taking place at the end of the month.