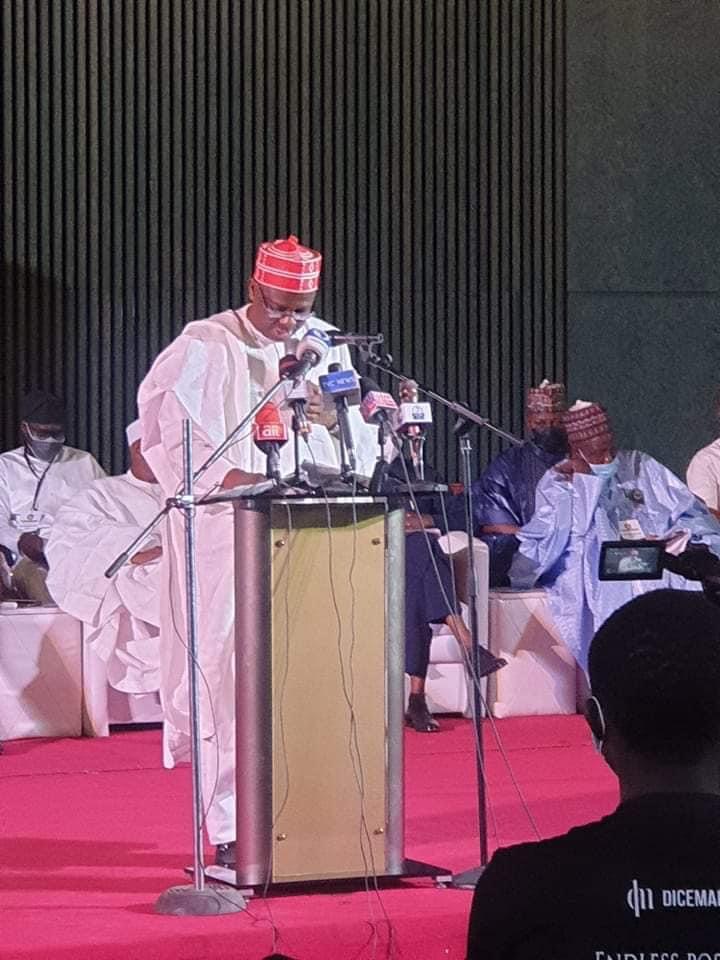 Former Gov. Rabiu Kwankwanso of Kano State and a group of prominent politicians on Tuesday launched a new political group -“The National Movement”, ahead of 2023 poll.

Speaking at the launch in Abuja, Kwankwaso, also the convener, said the movement was formed with a collective desire and commitment of Nigerians at home and in Diaspora to rescue the nation.

He said that the movement was formed by Nigerians from different religious, political and ethnic background in response to calls for a way out of the current economic and political situation in the country.

Kwankwaso said that the journey began in the summer of 2021, when a group of friends and associates met in Abuja under the auspices of Kwankwaso’s Friends to review the situation in Nigeria.

He said that the group was worried about the future and direction of the Nigerian polity.

“We were fully aware that the mind of the average politician in Nigeria was focused mainly on the next election and how to win in the election irrespective of the circumstances.

“But for those of us who met and reviewed the state of the nation in the summer of last year, we had a different view.

Kwankwaso added: “While most of us would want to contest and win election, we resolved that we must do everything possible within our abilities to work together towards reversing the dangerous course Nigeria was heading towards.

“ In our view, everybody matters and given the current nature of the political environment in this country, we must look beyond the boundaries imposed on us by the political parties operating in the country today.”

He said that the mission of the movement was to lay a solid foundation of justice, freedom and equal opportunities for all Nigerians irrespective of sentiments.

”Nigeria shall be a land of justice, freedom and equal opportunities where all citizens shall aspire to achieve their lifetime goals and ambitions, to live in peace, prosperity, and happiness.

“We shall utilize our rich and diverse cultures as unique and rare foundation of strength and rebuild a nation where no person is oppressed under God.

“The movement sees Nigeria’s human and cultural diversity not as a curse, but as an asset and blessing which we must put to good use,” he said.

Kwankwaso listed the core values of the movement to include trust, leadership, responsibility, equity, competence, trustworthiness among others.

“Furthermore, the movement shall: uphold the sanctity and dignity of human life; uphold the fundamentals of freedom and human rights.

“Restore the glory and prestige of Nigeria and Nigerians in the eyes of the world and consolidate Nigeria’s strategic alliances with our global friends and partners.

“We shall build a formidable, robust and competitive knowledge-based economy and bring back Nigeria on the World map of advancing nations.

“We shall fight against rural and urban poverty and promote prosperity of all, and not prosperity for only a few,” he said.

Kwankwaso said that the movement believed that all the above lofty ideals could not be achieved in an atmosphere of rancour.

“ We therefore are more than just determined to confront these threats to our corporate existence, we are ready with concrete and incontrovertible measures to pull our nation out of the doldrums.

“As avowed democrats we are ready and prepared to act in concert with the wishes and desires comprehensively of all our people.

“We will embark on massive, comprehensive, and unprecedented reform of our national life in order to improve the living conditions of all our people.

“The provision of critical infrastructure is the main engine for generating employment and national economic development,” he said.

Speaking, Mr Solomon Dalong, a former Sports Minister, stressed the need for the movement to start mobilise Nigerians for unity and justice.

Alhaji Buba Galadima, said that the launch was his happiest moment and called on Nigerians to support the movement.