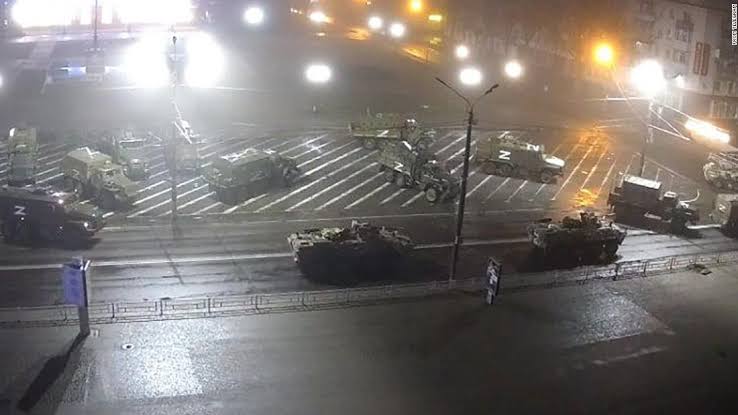 Kyiv and Moscow (CNN)Fierce fighting for control of the southern Ukrainian city of Kherson left dozens dead as Russia’s onslaught against multiple Ukrainian cities intensified Wednesday and fears over the civilian toll mounted.

More than 800,000 civilians have fled since the invasion began a week ago, with fears of further casualties increasing as Russian strikes hit built-up areas. Ukraine’s State Emergency Service reported “massive shelling and bombing” of the central part of Kharkiv, the country’s second largest city, on Wednesday morning.

On Wednesday night, CNN teams on the ground heard air raid sirens in Ukraine’s third-largest city Odessa and the town of Uman, Ukraine.

Meanwhile, in the capital of Kyiv, a major heating pipeline was damaged as a result of a missile strike to the area of the Central Railway station in the evening, the country’s interior ministry said. The sound of the blast could be heard across the city, according to a CNN team, though the target of the strike was not clear.

Kyiv’s mayor Vitaly Klitschko said preliminary reports suggested there were no casualties in a blast, adding: “We are clarifying the details.”

Klitschko said in a Telegram post that despite shelling in a number of Kyiv suburbs Wednesday, “Thank God, there are no casualties.”

“The enemy was trying to breakthrough to our city, but Ukrainian defenders are repulsing the occupiers and defending our capital.”

It’s unclear what caused the blast near the station. An Interior Ministry adviser said the damage was caused by the falling wreckage of a cruise missile after it had been intercepted by Ukrainian air defense systems.

The mayor of Kherson, Ihor Kolykhaiev, said that the Ukrainian military is no longer in the city and that its inhabitants must now carry out the instructions of “armed people who came to the city’s administration” — indicating that the city has now fallen under Russian control.

The announcement on the mayor’s Facebook page late Wednesday follows several days of pressure on Kherson by Russian forces who had surrounded the city.

Kherson City Council said earlier in the day that least 36 people had been killed in an ongoing battle for control of the area.

Kherson is a strategically important city on an inlet from the Black Sea with a population of nearly 300,000. If Kherson is now under Russian control, it would be a significant turning point for the invading military — the first major city seized. Earlier Wednesday, Ukraine disputed Russian claims of control saying Ukrainians forces were still fighting in parts of the city. The new post said Ukrainian forces had left.

The mayor also told the New York Times in an interview that a group of about 10 armed Russian officers, including the commander of forces attacking the city, entered the city hall building Wednesday. He said he was informed by the Russian officers that they were planning to set up a new administration similar to those in two Russian-backed separatist statelets in eastern Ukraine, according to the NY Times interview.

Late Wednesday, Hennady Lahuta, the head of Kherson regional administration, issued a message saying: “I ask everyone who is not at home now, or who is planning to go outside, not to do so. The occupiers are in all areas of the city and are very dangerous.”

‘He has decided to destroy the whole world’: Six global voices on Putin’s invasion of Ukraine

Mayor Kolykhaiev did not explicitly say that the Russians controlled the city, but that “there were armed visitors in the city executive committee today.”

In Kharkiv, a Wednesday morning strike on the regional police department and Kharkiv National University left the buildings engulfed by fire, according to Ukraine’s State Emergency Service and videos geolocated by CNN.

Four people were killed and nine injured, the State Emergency Service said Wednesday, while rescuers pulled 10 people from the rubble.

In Kharkiv’s northern neighborhood of Saltivka, a school was the latest site of Russian military strikes on Wednesday, according to a video and photo posted to social media. CNN geolocated and confirmed the authenticity of the video and photo.

The school has been the site of repeated strikes in recent days.

Source: The Institute for the Study of War with AEI’s Critical Threats Project

It’s unclear how many Ukrainian civilians have been killed during the war. The UN on Tuesday reported at least 136 civilian deaths since Russia’s invasion started, but cautioned the toll is likely “much higher.” CNN could not independently verify this figure. Earlier today, Ukraine’s State Emergency Service issued a statement claiming more than 2,000 civilians had been killed, before removing it.

The Russian Ministry of Defense has previously said it is targeting only military infrastructure.

Police officers remove the body Wednesday of a passerby killed in an airstrike that hit Kyiv’s main television tower.

While the US and NATO allies have aided Ukraine by sharing arms, military equipment and intelligence, as well as imposing severe economic sanctions on Russia, the alliance has thus far made clear it has no plans to send soldiers into Ukrainian territory.

Ukraine, which is not a NATO member, has mounted a fierce resistance, but in a rare interview from a Kyiv bunker Tuesday, President Volodymyr Zelensky warned that his country — which has a much smaller military than Russia — needs more help to prevent the crisis from spreading across Europe.

“I’ve spoken to Biden many times,” Zelensky told CNN. “And I’ve told them many times that Ukraine will resist and fight stronger than anyone else but on our own against Russia we won’t manage it.”

A woman cries outside houses damaged by a Russian airstrike, according to locals, in Gorenka, outside Ukraine’s capital, Kyiv, on Wednesday.

As Russia continued to strike key cities on Wednesday, the humanitarian cost of the invasion is steadily increasing.

The International Criminal Court said on Wednesday that it has opened an investigation into alleged Russian war crimes in Ukraine. ICC Prosecutor Karim A.A. Khan said in a statement that 39 of the court’s member states had requested for the investigation to proceed.

“Our work in the collection of evidence has now commenced,” Khan said, noting the investigation will cover incidents in Ukraine from 2013 to the present.

Khan said his office “had already found a reasonable basis to believe crimes within the jurisdiction of the Court had been committed, and had identified potential cases that would be admissible.”

Meanwhile, the number of people fleeing the country continues to rise. The UN said Wednesday it had recorded the arrival of 835,928 refugees from Ukraine since the invasion began on February 24. Of those, more than 450,000 have entered Poland.

“We are looking at what could become Europe’s largest refugee crisis this century,” UN High Commissioner for Refugees Filippo Grandi said a day earlier.

Arrivals from Ukraine in neighboring countries

At least 870,000 total refugees have left the country

Not included on map: 70,000 refugees to other European countries. The total for Russia includes approximately 96,000 people who reached Russia from the Donetsk and Luhansk regions between Feb. 18 and Feb. 23. Totals for all other countries represent arrivals since Feb. 24.

The UK Ministry of Defence said in an intelligence update Wednesday that Russia’s overall gains had been limited in the past 24 hours, adding this was probably due to “ongoing logistical difficulties and strong Ukrainian resistance.”

Russia has continued to target built-up areas with air strikes and heavy artillery, it added, focusing mainly on Kharkiv, Kyiv, Mariupol and Chernihiv.

A boy sits at an underground metro station used as bomb shelter in Kyiv on March 2, 2022.

“They haven’t from our best estimates made any appreciable progress in the last 24-36 hours,” Kirby said of the Russian forces moving towards Kyiv. “Nothing very significant.”

Kirby said the stall is likely due to a number of factors including Russian forces deliberately “regrouping themselves and reassessing the progress that they have not made and how to make up the lost time,” “logistics and sustainment challenges,” and “resistance from the Ukrainians,” Kirby said.

These maps explain why Putin is invading Ukraine 02:46

In Kyiv, sick children are being treated in a hospital’s underground bomb shelters. A missile hit a private maternity clinic near the capital on Tuesday, leaving the clinic damaged but still standing, according to the clinic’s chief. Separately, a military strike tore through two apartment blocks in a town west of Kyiv.

Russian and Ukrainian delegations were set to meet later Wednesday for a new round of talks, Kremlin spokesperson Dmitry Peskov said in a call with foreign journalists. He gave no details about the location or format of the discussions.

Peskov also acknowledged in the call that the Russian economy was taking “serious blows” as a result of sanctions imposed by the West, but said there was a “certain margin of safety” and that the economy “will stay on its feet.”

In a Facebook post published Wednesday, Ukrainian Foreign Minister Dmytro Kuleba said Russia’s claims were unchanged during Monday’s talks. “We are ready for talks, we are ready for diplomacy, but we are not in any way ready to accept any Russian ultimatums,” he added.

Anti-tank traps are seen on the outskirts of Odesa, Ukraine, on Tuesday, March 1, 2022.

British Prime Minister Boris Johnson said Wednesday that the UK would “continue to tighten the noose around Putin’s regime,” adding that its use of munitions in civilian areas “in my view already fully qualifies as a war crime.”

French President Emmanuel Macron said Europe has been “shaken” by the war in Ukraine in an address to the nation on Wednesday.

“Our continent, like many aspects of our daily lives, has been shaken by this war and will experience great changes in the months that come,” Macron said.

“Hundreds and thousands of refugees have been and will be welcomed on the continent of Europe,” he said, adding that France will “play its role” in making sure that the children of Ukrainians who stay in the country to fight will be looked after.

Zelensky has urged the international community to do more, calling on the US and NATO to establish a no-fly zone over Ukraine or put boots on the ground.

But Polish President Andrzej Duda said Tuesday that his country would not send fighter jets to Ukraine “because that would open military inference in the Ukrainian conflict.”

In his speech Tuesday, Biden reiterated that US would not deploy troops to Ukraine. Instead, American troops were in Europe to “defend our NATO allies in the event that Putin decides to keep moving west,” Biden said.