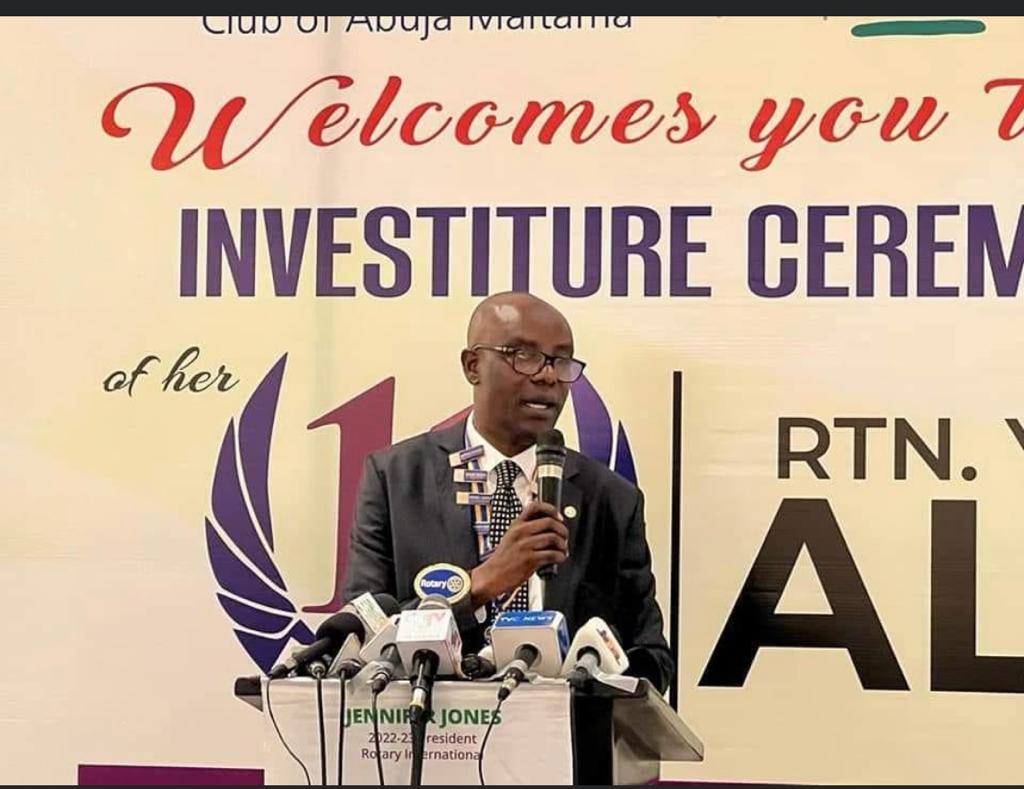 Managing Editor, Northern Operation of The Nation Newspaper, Rotarian Yusuf Alli has been inaugurated as the 11th President of the Rotary Club of Abuja Maitama, in Abuja.
This was just as former Governor of Borno State, Senator Kashim Shettima, said Nigeria lacked selfless and charitable leaders dedicated to meeting the needs of the society.
Speaking, Alli said even though he accidentally joined Rotary, his reason for joining the Club was not to lead but to serve.

“I have never aspired to lead. All I wanted was to serve in my little way. I come from a family with a deep passion for service and giving.

“I also married from a family which loves to share and give. So, I saw myself only living up to type in Rotary, it does not look extraordinary.

“I need to explain this to clear doubts about my resilience for service in Rotary. As long as I serve humanity, I do not expect anything in return.”

Speaking further, Shettima commended the Rotary International for their selfless service to humanity, saying they have become the conscience of the society.

Shettima said, “There’s a reason both religious groups and corporate organizations revolve around the principle of giving back to the society.

“It’s not just to compensate for the negative externalities accumulated in the pursuits of our capitalist and self-serving interests, but to fill the vacuum around us.

“When you look around this country to trace the origin of our national dilemma, the most glaring shortcoming is always undersupply of selfless and charitable leaders, whether in politics or business, socio-cultural groups, or local communities.

“As a time-tested group, Rotarians have figured out the danger of playing down the conditions of the needy, especially those in our immediate surroundings.

“Your Club, which operates from the nation’s capital and a district recognized as a habitat of some of the nation’s most affluential people, is privileged to grasp the socio-economic contrasts that have widened the nation’s poverty gap in the past years.

“We must never give back to the society just to appeal to ourselves, for that seems to be the mindset.

These clubs have ridden on the compassion and integrity of good people like you to serve as oases for the downtrodden.

“You have taught us much more than what it means to have empathy and, more importantly, act on it.

“Rotary clubs have become the conscience of the world, for they remind us of the debt we owe our society.

“We must never yield to the temptation to believe that giving back to the society that produced us is a favour to the needy.

“While this is the mainstream thinking, we can’t afford to understate the circumstances that gave us our good start in life and that doing so would come at great risk.

“Every society, just like nature itself, abhors a vacuum and so the alternative to giving to those at the lowest rungs of our economic ladder is a calamity for which none of us is prepared.

“The society isn’t the beggar here. This society is the source of the material possessions over which we scrutinize our balance sheets to determine the size of charities to dispense or authorize.

“We are merely giving back to our giver, and that’s because none of us is prepared for the worst implication of glossing over these vacuums in which the majority of us are trapped.

Shettima said he is not surprised that Rotn. Yusuf Alli was chosen as the as the 11th President of the Rotary Club of Abuja Maitama.

“He deserves to be so named,” he said, adding: “Yusuf Alli’s life, is a remarkable study in dedicated labour; professionalism; and a deep sense of duty.

“These were the essential building blocks of the life he has lived, over several decades, as a journalist.

“Today, he has become recognised, as a leading authority in investigative journalism, in our country.

“His colleagues, from near and far, recognise the incredible hard work, that he puts into every story, that he pursues, and the excellent quality of his outputs, in the professional field.

“If all that Rotarian Yusuf Alli has done in life, is the exemplary service that he has given to journalism in our country, we would be forgiven to conclude, that he has done enough, for a lifetime.

“But here we are today, to witness his investiture, as the 11th President of the Rotary Club of Abuja Maitama.

“I think the lesson to draw from that, is that Yusuf Alli is very dedicated to community good; but not only in journalism.

“By reaching the height he has attained today, as the 11th President of a body like the Rotary Club, we can similarly underscore the fact, that his dedication to community good, reaches beyond his calling, as a journalist.”

The immediate past President of the Club, Rotn. Victoria Unoarumi, said listed some of her achievements to include increased membership, surpassed goal set for the Rotary Foundation with contribution of $43,718.00, execution of 21 projects in the Rotary’s seven area of focus, completed a star project of a block of five classrooms.

She called on members of the Club to give the “Imagine Rotary President, Rotarian Yusuf Alli and the new board of directors the support they gave her during her tenure.

High point of the event was the presentation of awards to 11 distinguished Nigerians for their selfless contributions to the development of the country and humanity.