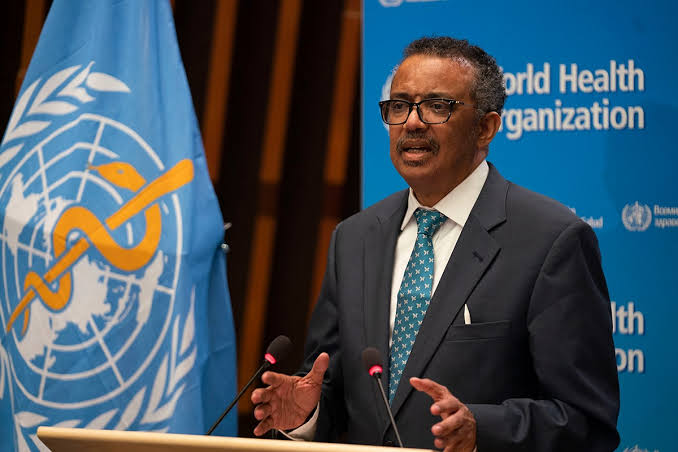 The World Health Organisation (WHO) on Wednesday, called on Member States to share COVID-19 sequences information to curb the spread of the virus globally.

WHO Director General, Dr Tedros Ghebreyesus, who made the call at a news conference at the UN heath agency’s headquarters in Geneva highlighted the importance of information sharing.

According to him, although virus sequencing is vital to detect and track new variants in the COVID-19 pandemic, sharing this information must be stepped up globally,

“Since the peak of the Omicron wave, the number of sequences being shared has dropped by more than 90 per cent, and the number of countries sharing sequences has fallen by a third.’’

The WHO chief recalled that the first sequence of SARS-CoV-2, the virus that causes COVID-19, was shared with the world three years ago, which enabled the development of tests and vaccines against the disease.

“We urge all countries now experiencing intense transmission to increase sequencing, and to share those sequences,” he said.

A WHO advisory group has published an assessment of the new Omicron subvariant XBB.1.5, which first emerged October 2022.

Sequences have been reported from 38 countries, though mainly from the United States.

“Based on its genetic characteristics and early growth rate estimates, XBB.1.5 may contribute to increases in case incidence,” the Technical Advisory Group on Virus Evolution (TAG-VE), said,

“To date, the overall confidence in the assessment is low, as growth advantage estimates are only from one country, the United States of America.”

Ghebreyesus also emphasised the importance of testing, which is critical both for tracking variants and ensuring at-risk people receive adequate care.

Since February 2022, the number of COVID-19 deaths reported each week has dropped by nearly 90 per cent, but they have been hovering at between 10,000 and 14,000 since mid-September.

“The world cannot accept this number of deaths when we have the tools to prevent them,” he said.

Last week, 11,500 people worldwide died from COVID-19, but “this number is almost certainly an underestimate given the under-reporting of COVID-related deaths in China,” he added.

Countries are also urged to provide better data on who is dying from the disease. Currently, just 53 out of 194 nations provide data that is disaggregated by age and sex.

Most deaths are among at-risk groups, with people 65 and older accounting for almost 90 per cent of all deaths reported during the last six months of 2022.

In addition, WHO chief celebrated the end of the Ebola epidemic in Uganda.

He also welcomed the adoption this week of a Security Council resolution extending cross-border aid delivery into northwest Syria from Türkiye for another six months.

Syria, Haiti and Malawi are among 31 countries battling devastating cholera outbreaks that are both more widespread and deadly than normal.

“While we have had large cholera outbreaks before, we have not seen such a large number of simultaneous outbreaks.

“The common denominator for many of these outbreaks is climate-related events, such as storms, floods and droughts.” the WHO chief.

Ghebreyesus appealed for more information from China regarding its ongoing COVID-19 surge.

The UN agency is working with the authorities to fill important gaps, including in understanding transition dynamics, the breakdown of increases or decreases in hospitalisations, virus sequencing, and differences in fatality rates between urban and rural areas.

Covid In China: Officials Must Share Data On Its Impact, Says WHO