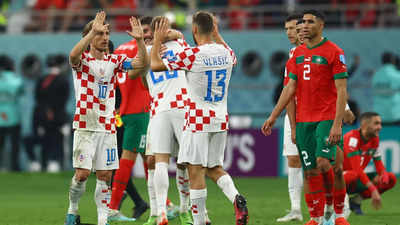 Runner’s up at Russia 2018 World Cup Croatia edge out the First team from Africa to make it to the last four at a FIFA World Cup Morocco 2-1 in Qatar to secure Third Spot on Saturday.

Mislav Orsic’s late first-half strike in the 42nd minute was enough to settle the contest after two early goals inside the first nine minutes setting the tone for a pulsating encounter, Achraf Dari cancelling out Josko Gvardiol’s opener for Croatia.

Croatia took the lead seven minute into the match through Josko Gvardiol who bravely dived in for the header when Ivan Perisic who headed the ball into him after a cross was sent into the box.

Two minutes later, Morocco responded at the other end with an equalizer when a cross came off Lovro Majer’s head and looped into the box where Dari beat the keeper with a header.

Morocco began to find space in the Croatian defence, with their movements and passing and helping to create several chances. But the African side lacked the killer instinct in front of goal.
There were no strikers good enough to drive in the balls.

Croatia duly punished them in the 42nd minute when an interception in the final third found Orsic, whose shot arched beautifully from a tight angle past goalkeeper Yassine Bounou before going in off the post

Morocco will still be leaving Qatar with pride even though they failed to win the bronze medal.