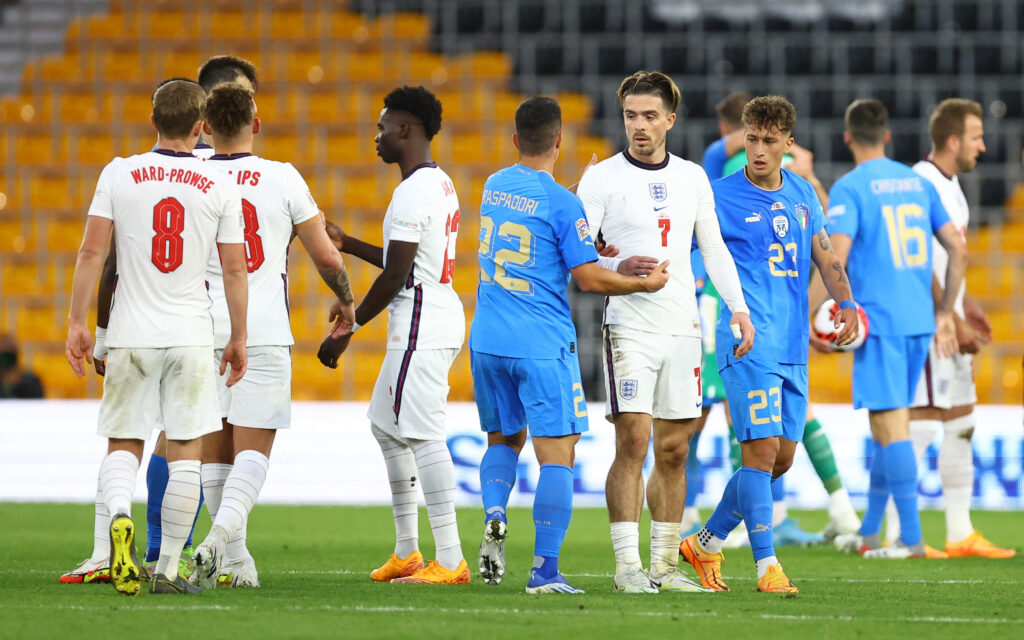 England’s winless start to their Nations League campaign continued as they were held to a 0-0 draw at home by a youthful Italy side at a near-empty Molineux on Saturday.

The first meeting between the nations since the tumultuous Euro 2020 final at Wembley last year was a tame affair with precious little to cheer for the 2,000 children allowed to attend despite a UEFA ban.

England’s Aaron Ramsdale was the busier of the two keepers, with crucial saves in the first half to deny Sandro Tonali and Matteo Pessina as Italy cut through England’s defence.

With Harry Kane left on the bench until the 65th minute, England lacked attacking spark and the closest they came to scoring was Mason Mount’s first-half shot against the bar.

Raheem Sterling wasted a glorious opportunity after the break but England did not do enough to earn the win.

Gareth Southgate’s side are bottom of Group A3 with two points from their opening three games while Italy, who failed to qualify for the World Cup, are top with five points.

The match was played without fans as part of a UEFA punishment for crowd trouble during last year’s Euro 2020 final at Wembley which Italy won on penalties.

While England’s lineup had an experimental feel and the atmosphere was flat, the lack of quality and their over-cautious style will be a cause for concern with the World Cup looming in Qatar in November.

It is the first time they have gone three games without a win since Southgate took charge and they have not scored a goal from open play in their last three games.

“We improved upon a lot of things today,” Southgate said. “We had two or three really good chances that we needed to score and lacked that bit of sharpness in the final third.

“But the general performance I was pleased with. I thought the second half we were the better team.”

Mancini would have been the happier of the two managers as his new-look side played the better football, starting from the third minute when but Davide Frattesi side-footed a superb chance wide of the post.

Mount should have scored when he was played in on goal but his curling effort rattled the crossbar.

But the slicker moves came from Italy and Ramsdale made a stunning save with his legs to deny Tonali who looked poised to score from Giovanni Di Lorenzo’s volleyed cross.

The Arsenal keeper then had to react smartly to keep out Pessina’s looping shot on the stroke of halftime while Gianluca Scamacca also fired another chance over.

Sterling, captain for the night, should have put England ahead but his scooped finish over the crossbar rather summed up a disappointing night for the hosts.