From Lugard Street to Bourdillion: Who is this Uthman Shodipe? 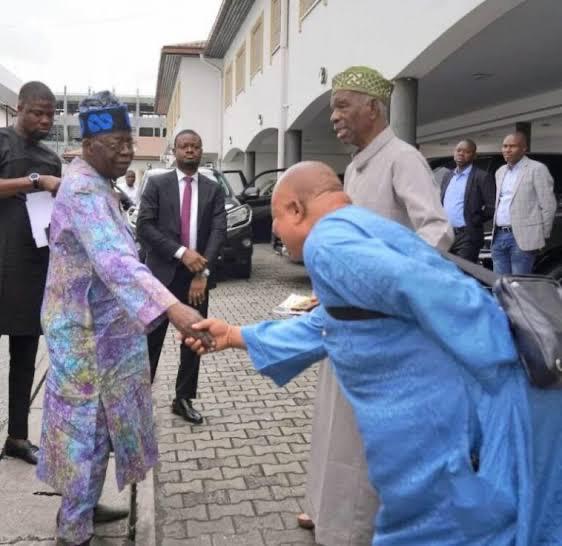 Number 18a, Lugard Street, Off Alfred Rewane Way, Ikoyi is just about 3 minutes drive to Bourdillion Road Ikoyi Lagos.
Just link the main road make a turn, drive to Falomo Bridge and turn under the bridge to link Bourdillion and in minutes, you port in front of the residence of Asiwaju Bola Ahmed Tinubu.
Number 18a, Lugard Street, Off Alfred Rewane Way is actually the residence of Chief Olabode George, former Deputy National Chairman of the Peoples Democratic Party. That was the crossover trip that Uthman Shodipe, until few days ago, still known to be a Special Adviser to George, made few days ago.
Shodipe abandoned the George’s ship and berthed at that of Tinubu, who has all the confidence of succeeding President Muhammadu Buhari as Nigeria’s next president come next year.
Don’t forget the hot exchanges, the brickbats between the two political foes.
“I will relocate from Nigeria if ever Tinubu wins APC Presidential election,” recall George had vowed in the buildup to the election of presidential primaries by the political parties. That was at a time George never even envisaged that Tinubu would scale the primaries hurdles of his party.
You can’t be too sure that statement was not drafted for him by his ex-adviser who also doubled as his speech writer and media fixer.
Especially the whole of last year till date, it was known George and Tinubu had engaged in the most acrimonious of exchanges with the former doing most of the punching on behalf of his boss.
Severally, George has accused Tinubu of “stealing Lagosians blind,” a tag the two-term former governor of Lagos has rejected. Tinubu’s aides would retort that in spite of George’s many allegations against him, it is only George who has indeed seen the four walls of the prison between the two.
While many are still watching if George would make good his vow to relocate should Tinubu win the election next year, it is his aide, Shodipe, who has relocated from his political enclave and pitched his tent with his former boss’ avowed political enemy.
Shodipe is not new to politics of Lagos. He indeed contested for the governorship ticket of the Alliance for Democracy in Lagos State in 1999 before the ticket was won by Tinubu.
Others in the race at the time were late Engr. Funsho Williams, Late Wahab Dosumu, Mrs. Bucknor Akerele, Tawa Williams and Dapo Durosimi-Etti.
Before his foray into politics, Shodipe was a member of the Editorial Board of The Guardian Newspapers. And before then, he was an Editor with the Daily Times.
A historian who obtained his degree from the University of California, Shodipe is a writer with poetic slant, a style that had earned him recognitions far and near. It was therefore not surprising that Shodipe was later appointed General Manager of the Lagos Printing Company.
He authored “From Johnson to Marwa” an account of the governance of Nigeria’s economic capital from the era of the late Brig-General Mobolaji Johnson to that of the military administrator of Lagos, Major General Buba Marwa, the current Chairman of the National Drugs Law Enforcement Agency (NDLEA).
After many years of bonding with George, Shodipe appears to feel that the presidential ambition of Tinubu serves a more realistic purpose at this time than fraternizing with the ambition of the candidate of the PDP, Atiku Abubakar.
Incidentally, why George and Tinubu appear to be sworn political enemies, George is one of those who see the ambition of Atiku hitting the rocks without the restructuring in the party; a major component of which is the removal of the National Chairman, Dr. Iyorchia Ayu.
However, the more strident the clamour grows for the removal of Ayu, the more adamant it appears that Atiku will not support his exit. And where does that leave George in the overall equations? Will George, faced with the status quo in the PDP today, be forced to take the defection option? Some analysts are saying Shodipe might as well have been a member of an advance team of the former Deputy National Chairman of the PDP.

SETS UP SUPPORT GROUP FOR TINUBU/SHETTIMA

Few days after his image emerged shaking hands with Tinubu in the presence of a chieftain of the APC in Lagos, Alhaji Tajudeen Olusi, Shodipe has unveiled a support group for Tinubu.
The group, called The Patriots Roundtable, according to Shodipe-Dosumu, was borne out of a genuine desire to shape debate and create a new melting point of ideas.

See the Mission in the statement Below:

The Patriots Roundtable: Why we are involved

This is why the Patriots Roundtable is involved.

The Nigerian Union is at a crossroads. It is weighed down by multifarious historical challenges and a bitter and pestiferous burden of the present.

There are hurdles everywhere. Voices are colliding in sometimes crude, fissiparous passion.

But we must move from the brink. We must withdraw from the destructive edge. We must steer towards compromise and the peace of the Roundtable.

Our position is borne upon necessary amity and accommodating fairness. Our guiding vision is about Truth and conscionable shepherding as the defining core of nation building.

This is the Patriots Roundtable leitmotif . Amid the holler and conflicting ideals about the Nigerian journey as our nation pivots towards the 2023 general elections , we have joined the fray to enlighten and guide, to contribute and support , to strengthen and enhance the national democratic space.

After thorough examination , sifting and sorting through the muddling melange of the presidential candidates and their ideals and promptings , we have decided to pitch camp with the Tinubu -Shettima ticket based on our vision and their vision about the indivisibility of the Nigerian Union , predicated on equity and fairness, resolved on a unifying accommodation of all members of our diverse Union, without favoritism to any tribe or sectarian recourse.

We will engage without bias. We will debate without malice. We will tussle in the intellectual fray of ideas and idealism with purposeful patriotic largeness.

We will henceforth advocate with vigorous assertion as an Independent Support Group for Tinubu – Shettima dream ticket , ultimately believing that this dynamic duo is borne upon an inherent undying idealism that will heal the broken places, that will rectify the ancient wrongs, that will mend the wounds of old , and God’s willing , pull our nation out of the present variegated challenges.

The journey ahead will be tough and tasking. There will be nay-sayers and malignant agents of envy and recidivism. There will be provocateurs of ruin pretending salvaging emblems.

We are ready. We are proven, steadfast , focused and firm, unyielding in this patriotic grapple.