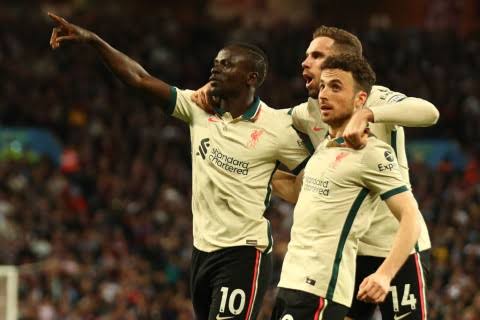 After the 1-1 draw with Tottenham on Saturday, Liverpool’s championship hopes looked bleak while they were being held to the same scoreline at Villa Park.
But the Reds’ superior quality ultimately came up trumps.
Much of the pre-match attention focused on how Liverpool legend and Villa manager Steven Gerrard could be the one to further derail his former side’s quadruple bid.
Douglas Luiz’s early opener suggested a shock could be on the cards.
But Joel Matip swiftly equalised, and from that point Liverpool were generally the greater threat, eventually completing the turnaround just past the hour, thanks to Mane.
Liverpool’s underwhelming start culminated in a defensive mix-up between Kostas Tsimikas and Matip allowing Douglas Luiz to test Alisson and then smash home the rebound.
But the Reds quickly levelled through Matip in the sixth minute.
The Cameroonian prodded into the empty net after Virgil van Dijk beat Emiliano Martinez to a loose ball in the Aston Villa penalty box.
While Liverpool struggled to establish any real control in a feisty first half, the better chances continued to go their way.
Mane headed just wide, and Naby Keita comically mishit an attempt from 10 yards with the goal at his mercy.
It was a tighter affair in the second half, though Liverpool’s next clear-cut opportunity proved decisive.
Luis Diaz did well to pick out Mane from the left, and the Senegal forward brilliantly twisted his body to meet the cross with a header into the bottom-right corner,.
Aston Villa failed to hit back as Danny Ings had a goal disallowed for offside.
Liverpool now turn their attentions to the 2021/2022 English FA Cup final match next, as they face Chelsea at Wembley on Saturday.
They will then go to Southampton three days later in the league, while Aston Villa host Crystal Palace on Sunday.