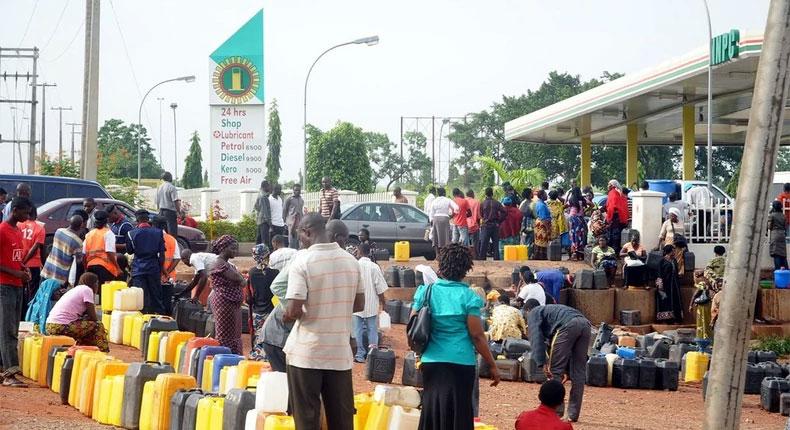 More complications are ahead for Nigerians as the scarcity of petroleum products worsens across the country.
NPO Reports’ survey across major cities show that the scarcity is not abating. Observations show that queues are getting longer at the filling stations where fuel is being dispensed.
Many motorists complain of spending as many as seven hours or more at filling stations to get the product.
Our correspondent who went round the Abuja metropolis on Saturday, observed that queues are as long as more than one kilometre in some places while those with shorter queues are those with higher prices.
At a fuel depot in Gwarimpa area of the metropolis, a litre of PMS sold for N375 per on Saturday.
One of the attendants at the filling station, who declined to name himself, said the product was sold at N275 per litre last week.
“But our boss called us on Friday night that as from Saturday, we must increase to N375 per litre,” he told the NPO Reports
Asked what the patronage has been since the price was hiked again, the attendant said while some come and lament and leave without buying because of the price, many also just lament but ended up buying the product.
A motorist met at the fuel depot who identified himself as Subaida Umar told NPO Reports correspondent of her frustrations before she got information about availability of fuel at the location.

“I drove down here all the way from Maitama. I heard they sell at N275 but on getting here, I was told the price has changed. Instead of 50 litres for the car, I am now buying 40 litres. At least, it is better than nothing,” she said
Major Oil Marketers Association of Nigerian (MOMAN) in a release on Friday, had said that logistics is the major cause of the continued scarcity.
It said, “These queues are caused by exceptional high demand and bottlenecks in the distribution chain. The major cause is the shortage and high (US dollar) costs of daughter vessels for ferrying product from mother vessels to depots along the coast.
“Next is inadequate number of trucks to meet the demand to deliver product from depots to filling stations nationwide. These high logistics and exchange rate costs continue to put pressure on prices at the pumps.

“Over the past three months, staff and management of MOMAN companies have worked diligently at depots and filling stations to relieve the stress faced by customers through the Christmas and New year period.”
It added, “Our members have again agreed to extend depot loading hours as well as keep strategically situated service stations open for long hours to ease access to fuel for our customers.”
The association said the only solution to the perennial crisis in the availability of the product is the deregulation of the downstream sector to allow for better investment.
In Lagos, the situation is getting worse. Few stations that sell are packed full with vehicles while queues are as long as one kilometre.
At the NNPC station, Omole, the product is being sold at the official price. The queues as observed Saturday evening went as far as Lateef Jakande Road.
Many of the filling stations have also caused untold hardship to other road users with traffic congestion on Agidingbi Road, Iju Road and other parts of the Lagos metropolis observed.