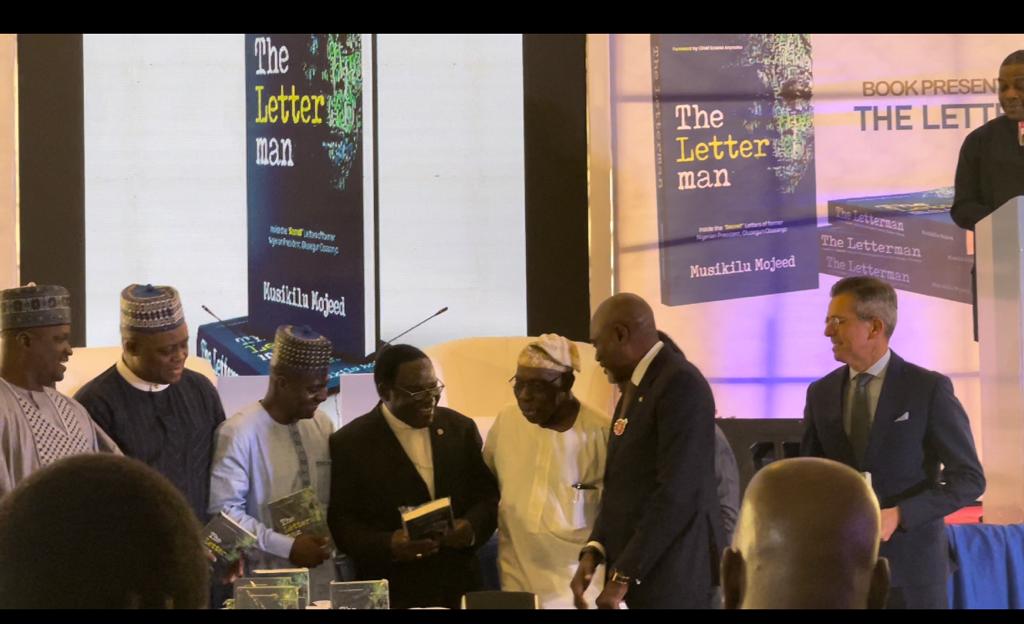 Former President Olusegun Obasanjo on Thursday explained the reasons behind his many letters some of which had in the past caused some uproar.
Obasanjo spoke at the public presentation of The Letter Man: Inside the Secret Letters of Former Nigerian President Olusegun Obasanjo, held in Abuja.
This was just as he ‘accused’ the author, Musikilu Mojeed, of breaking into his archive to retrieve his secret letters without any authority to do so.
But despite saying that Mojeed, an award-winning investigative journalist and Chief Operating Officer of Premium Times, never took permission before using the letters he scooped from his archives, he confessed to finding his works most appealing.
“Not only do I write letters. In some cases, I also proffer the solutions,” the former President told the gathering on Thursday.
Obasanjo however admitted that some of the “solutions are partisan” while “Some are unique.”
He cited the instance of the crisis in Zimbabwe when he was the Head of State and invited leaders of two warring groups.
Obasanjo said when he saw that both Joshua Nkomo of the Zimbabwe African People’s Union and Robert Mugabe of the Zimbabwe African National Union were not going to join hands to ensure peace in the country, he invited the two of them to his office in Nigeria.
“I told them we are not here for any ideological warfare. I got two pistols and loaded them and I made sure they saw the pistols were loaded. I gave each of them one and I said at the mention of “Go” they should shoot each of them and that whoever was fast enough to kill the other would be sent back to Zimbabwe while the dead one would be buried here in Nigeria. Nkomo said “What?” He said you are a man with unique solution to every problem.
Obasanjo said his desire for a better society or anywhere he finds himself is at the heart of the letters he had written in the past.
The author captures many letters the former President had written in the past including those he wrote to his superiors where he queried some their actions or lack of them.

“I think we don’t appreciate what we have as a country,” Obasanjo told the gathering
In his review of the book, Bishop of Sokoto Diocese, Mathew Hassan Kukah, said
“Obasanjo boxed with bear knuckles in terms of his communication over things he felt very strongly about.”

Kukah went on to say that Obasanjo’s letters showed him to be a courageous man He said, “It’s a biding passion and patriotic commitment to the principle and believe of the professionalism of the military.”
He wondered how Obasanjo survived in the military after writing to virtually all his superiors to pour out his mind over issues bordering on the service.
“I’m saying to myself as I’m reading these letters” has the military changed? How could Obasanjo write all these of kind of things and get away with them.”

He cited the instance of a letter which Obasanjo wrote to a Brigadier who choose to read Law in the midst of the civil war challenging his action and describing as capable of affecting the morale of the other officers.

Speaking on the relevance of letter writing even in today’s world of technology, Obasanjo said ”

“Then when I read some of the letters in the book as put by Musikilu, I said to myself—some of you have said what gives me courage? I then look at this book, if you had asked me to give a title, and not the title ‘Letterman’, I would have titled it “Audacity of an optimist”.

“The thing again about a letter is that it goes beyond you. There is nothing personal to me about the letters—interest of the community, the society, the organisation that I belong to, the military, warfront—how should the war be fought so that we minimize casualty, so that we can deal with it and finish it off,” he said.

Obasanjo expressed regrets that Nigeria has lost its place in diplomacy especially in Africa.

He said rather than Nigeria stepping to handle the issues arising after the killing of Idris Derby of Chad, he said Qatar stepped into the matter and resoled the issues.

“That is not good. How did we lose that? Only this morning, I heard something that shocked me. When Idris Derby was shot in the back, and it was Doha (Qatar) that decided to put the different elements together, not Nigeria, and Chad is in our backyard, we did not do anything about it,” he said

He said the former President had played significant roles in welding otherwise discordant situations together. He described Obasanjo as a peace maker.

The author, while speaking, narrated how he stumbled on Obasanjo’s letters in the course of his visit to the Obasanjo Library.

He said sensing that he would not be allowed the needed access to the letters, he devised other means of getting what he wanted.

Mojeed said through the letters, he came away with different impressions about the former President, contrary to the image of him that he had carried in his mind even as a young Nigerian.

He said it is dangerous for journalists to have mindset without exploring their subjects. Those who spoke at the event include Editor-in-Chief of Premium Times, Dapo Olorunyomi, Chairman of the occasion, Mr. Yussuf Olaolu Ali (SAN); former Chairman of the Federal Inland Revenue Service, Ifueko Omogui, former Governor of Bayelsa State, Seriacki Dickson; former Minister of Transport, Rotimi Amaechi, and a host of others.