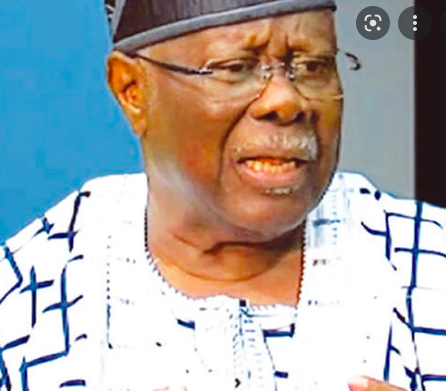 A former Deputy National Chairman of the People’s Democratic Party, PDP, Chief Bode George had said that it would be difficult for the PDP to sell it’s presidential candidate, Alhaji Atiku Abubakar to the southerners if the current chairman of the party, Senator Iyorcha Ayu remains in his position.

George gave this warning to the party while featuring on Channels TV’s program, Politics Today saying that the constitution of the party does not support the current arrangement in the party.

He  noted that there was an agreement that every zone will go home with one of six top positions according to how Nigeria is being divided geo-politically.

“The arrangement creates sense of belonging, oneness and inclusivity in PDP.

“Section 7 sub section 3 of our current constitution confirms that zoning and rotation will remain sacrosanct in our party. Never in the history of our party that a presidential candidate and National Chairman will come from the same zone.

Chief Bode added that Ayu was once an assistant secretary to Prof Jerry Gana Committee set up to establish PDP and he knows many of these rules.

“All we are saying, for the sake of equity, inclusivity is for the party to give us a position that those in the south will take home to convince people to vote for the party.

“What are we going to use to convince the larger members of the party in the south? Chief Bode asked

“Failure to comply with this arrangement, we will not be able to convince Nigerians especially people in the south to vote for our party,” he concluded