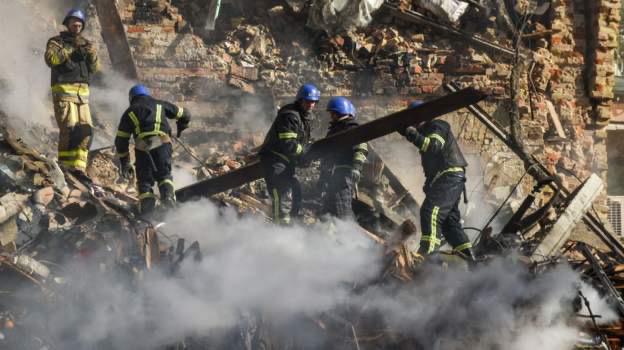 President Zelensky says Russia launched drone and missile attacks across Ukraine “all night and all morning” trying to “terrorise” civilians
Four people have been killed – including a pregnant woman – after Kyiv was hit by “kamikaze drones”, authorities say
And four people have died after a rocket attack in the north-eastern Sumy region, the governor there says
Frantic rescue work is going on in the centre of Kyiv after buildings were damaged, our correspondent Paul Adams reports
The capital reverberated to the rattle of gunfire in the morning as anti-aircraft batteries tried to shoot down the drones
At least 19 people were killed in a wave of Russian missile strikes on the capital a week ago
Russia has increasingly been using Iranian-made drones to hit critical civilian infrastructure.
In Kyiv’s Shevchenkivskyi district, rescuers are still searching for survivors in the ruins of a block of flats that partially collapsed after this morning’s attack.

The street is cordoned off and dozens of firefighters and emergency workers are at scene.

Four people have now been confirmed dead here, after the body of a man was found. The victims include a pregnant woman.

Across the street, the offices of Ukraine’s energy company were also hit.

The facility was probably the intended target of the strike, carried out by so-called kamikaze attack drones, supplied by Iran to Russia.

Kyiv says this is how Moscow is responding to military defeats on the battlefield: by attacking critical infrastructure ahead of winter.

The city’s mayor, Vitali Klitschko, said 28 drones were fired at the capital, and that only five hit targets.

Russia has increased the use of this weapon in attacks across the country, as it seeks to avoid using long-range precision missions.

Residents, meanwhile, say they are not afraid. They are angry.
BBC