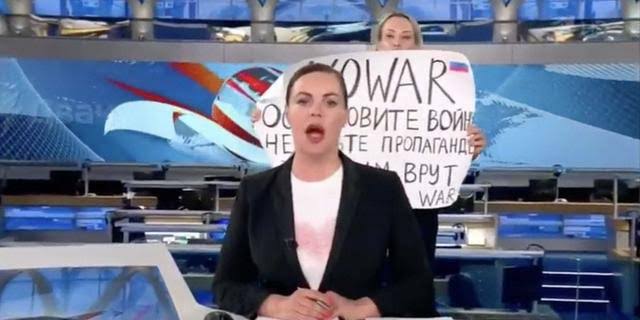 A woman holding an anti-war sign ran on to the set of a Russian evening news programme on the state-controlled Channel 1 on Monday evening.

The sign, clearly visible behind the presenter, read: “No war, stop the war, don’t believe the propaganda, they are lying to you here.”

The woman has been named as Marina Ovsyannikova, an editor at the channel.

Russian TV news is tightly controlled by the Kremlin and reflects only the Russian version of events in Ukraine.

Ms Ovsyannikova is believed to be in police custody.

Her voice could be heard during the broadcast saying, “No to war! Stop the war!” before the programme director cut early to a recorded news report.

Before the protest, which happened live on the nightly news programme, she recorded a video in which she called events in Ukraine a “crime” and said she was ashamed to work for what she called Kremlin propaganda.

She called on the Russian people to protest against the war, saying that only they could “stop the madness”.

From the moment Ms Ovsyannikova’s identity became known, she has received dozens of comments on her Facebook page in Ukrainian, Russian and English, thanking her for her actions.

Russian television news has long been controlled by the Kremlin and independent viewpoints are rare on all the major channels.

But new laws introduced since the invasion of Ukraine have made the media landscape even more draconian. Legislation passed earlier this month made it illegal to call the military action an “invasion” or to disseminate “fake” news about it.

State-controlled Russian media refer to the war as a “special military operation” and paint Ukraine as the aggressor, with a government described as neo-Nazi.

Several of the remaining independent media outlets have stopped broadcasting or publishing after pressure from the authorities, including the radio station Echo of Moscow and TV Rain – an online TV channel.

Others, like newspaper Novaya Gazeta, are attempting to report on the situation without falling foul of the new censorship laws.

Access to the BBC has also been restricted inside Russia, leading the corporation to issue guidance over how to continue using its services.

Russia’s media watchdog accused the BBC and other foreign broadcasters of the “deliberate and systematic circulation of materials containing false information”.

Many social media sites have also been blocked, further restricting the number and diversity of news sources available to people inside Russia.

Facebook and Twitter have been restricted for several days, while Instagram – which is particularly popular in Russia – was blocked on Monday, although many Russians have found ways round the restrictions.