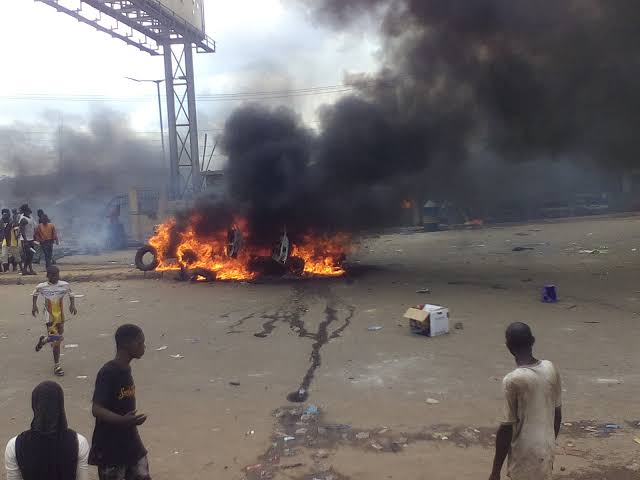 There was tension across Abeokuta, the Ogun State capital on Monday, as some residents clashed leading to burning of shops and other businesses.

The pandemonium was given ethnic colouration as it was attributed to a disagreement between a Yoruba man and a Hausa man.
For hours, there were repeated gunshots, as residents scampered for safety.

It was gathered that the clash which started on Monday evening snowballed into a full-blown crisis by Tuesday morning with several shops razed and many injured.

Our sources say the crisis was ignited by a fight between a Yoruba man and a Hausa man.

The Hausa man was presumed dead, having sustained serious injuries, development sources said provoked the Hausa traders, who reportedly went on a rampage, destroying properties worth millions of Naira.

An eyewitness, who confirmed the incident, said the crisis took another turn when the Seriki Hausa (head of Hausa settlers), who was called to intervene in the crisis was seriously injured.

“The Seriki Hausa who was called upon to settle the issue was injured and this further worsened the crisis.

“The man is currently receiving treatment at the Federal Medical Centre (FMC), Idi-Aba”, the source, who preferred anonymity, said.

The Ogun police spokesman, Abimbola Oyeyemi, confirmed the incident, saying the situation had been brought under control.

He said no life was lost, contrary to the report that a Hausa man was killed in the incident.

Oyeyemi added that the police had arrested several persons in connection to the crisis.

“But, contrary to what people are insinuating, no life was lost, but people were injured while shops were also burnt and property destroyed.

“We are still investigating the clash. The crisis is a result of a rumour because there was a clash between a Hausa man and a Yoruba man. I think the Hausa man was injured and some people went to town with the rumour that the injured man died and that was what led to the whole thing and the issue escalated.

“But, contrary to that rumour, no life was lost, and we are still investigating and after a thorough investigation, whoever that is found culpable will be charged to court”, Oyeyemi said.

Meanwhile, traders who lost their wares to the crisis berated the police, saying, “the police did not answer us when we went to their station to report.”

It was also gathered that the Lafenwa Police Divisional headquarters is right beside the market.