Benue Community in Osun at ‘War’ as Governor Sets Up Panel 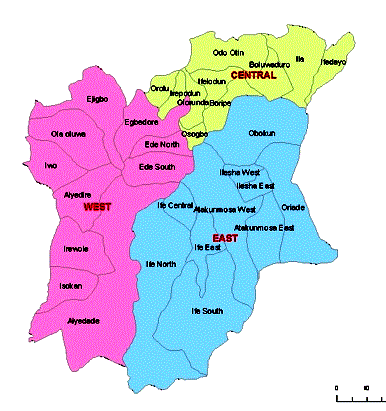 Amidst the leadership crisis that has engulfed the Benue indigenes community in Osun, the Governor, Alhaji Gboyega Oyetola has set up a committee to resolve the problems.
Oyetola, while inaugurating the committee on Sunday in Osogbo, during a meeting with the leaders of Benue indigenes resident in Osun directed the warring factions to withdraw all cases pending in court for peace to reign.
There had been a crisis within the Benue community in Osun with two factions laying claim to its leadership.
Oyetola said the committee would be chaired by the Commissioner for Environment and Sanitation, Mr. Sola Oladepo, Commissioner for Political matters and Intergovernmental relations, Mr. Taiwo Akeju, as Vice-chairman, while the Special Adviser on Security, Mrs Abiodun Ige, will serve as secretary.
The governor also said that the two factions should select five persons each as their representatives in the committee.
Oyetola appealed to the Benue community to continue to support his peace-loving government, also urged them to support his re-election come July 16.
He said, “Osun is known as a peaceful state, and as a responsible and responsive government, we will always ensure a peaceful environment for both indigenes and non-Indigenes.
“We have to sustain the peace in the state and not give room for any crisis, and this is the essence of this meeting for the two groups to resolve the issue and ensure peace.”
In their separate addresses, Oladepo, Akeju, and Ige appealed to the two factions to unite and agree on a consensus leader for peaceful coexistence.
In his response, a factional leader of the group, Chief Audu Samson, appreciated the state government’s prompt intervention in the crisis.
Samson assured the governor of a speedy and amicable resolution of the crisis.
He promised that the Benue community in Osun would support the governor’s reelection bid.
Also speaking, the leader of the second faction, Chief Augustine Tsor, described the government’s intervention as a welcome development.
“Osun is a very peaceful state and we are happy that Gov. Oyetola is set to resolve our crisis because we believe in his government.
“I implore my people to be law-abiding. I believe that the committee set up today will do its best to silence this crisis.
“I will humbly withdraw the matter from the court since the governor has directed that,” Chief Tsor said