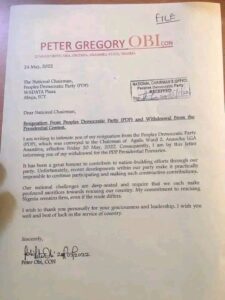 Former Governor of Anambra State and running mate in the 2019 elections, Mr. Peter Obi, has reportedly dumped his party.

Obi was said to have informed the leadership of his party in his Anambra ward that he is no longer a member of the party adding that he was withdrawing from the race for the presidential ticket of the Peoples Democratic Party.
Though, there is no official statement as at the time of this report, those in his ward are said to have been duly informed of Obi’s decision.
A message posted to Obi inquiring the veracity of the claims had not been responded to as at the time of filing this report.
A copy of the letter reportedly addressed to the National Chairman of the party Dr. Iyorchia Ayu which was later sighted by the NPOReports indicated that Obi told the National Chairman he had informed the chairman of his ward in Agulu Ward in Anaocha Local Government Area of Anambra State.

“Recent developments within our party make it practically to continue participating and making such constructive contributions.”