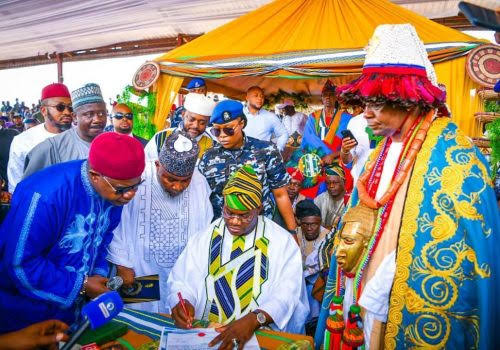 Governor Yahaya Bello of Kogi has presented the staff of office to the new Attah Igala, Mattew Opaluwa, describing the process as one that conformed to tradition, equity and fairness.
Bello presented the staff of office to the new Attah Igala during the coronation event on Friday in Idah, Kogi.
The governor said that the process of installation was a departure from previous practice which was marred with crises, violence and destruction of lives and properties.
Bello said that the mammoth crowd from within and outside the Igala Kingdom also proved that the people were satisfied with the selection of their new King.
“There is now total departure from certain practices which made the appointment of traditional rulers in Kogi filled with crises, violence and disruption of lives and properties in the past.
“My new direction administration has ushered in a different narrative of celebrations and felicitations.
“To do justice to the tradition and will of the people, we knew transparency was the only way we could guarantee tranquility and harmony in Igala Kingdom after a new Attah has been selected.
“So, we acted with fairness and total respect for the people, tradition, and institutions of Igala throughout the process. I know that by the grace of God we have achieved the peaceful change of baton.
“On Aug. 27, 2020 the past Attah Igala, Micheal Ameh-Oboni joined his ancestors and the stool became vacant.
“Traditionally, the Attah stool rotates among the four ruling houses. The emergence of his royal majesty Mattew Opaluwa as the Attah Igala respects the rotation principle among this ruling houses.
“I have discovered by my own that leadership and political will travel hand in hand when the objective is good governance.
“The era of imposition of traditional rulers on any community ended when I came into offices and I have abundant political will to keep it so.
“I am gratified to see the mammoth crowd which has turned out today to witness this occasion. It is clear evidence that his Royal Majesty enjoys wide acceptance and support from his people,” Bello said.
Bello also urged the Attah Igala to use his revered stool to ensure the peace, progress and development of the Igala Kingdom.
He also advised the newly installed King to resist any form of temptation to politicise his ancestral stool, and oppression of any person or tribe.
The Attah of Igala in his response appreciated the governor who under his leadership ensured that due process was followed in the process of selecting him to ascend the throne of his fore- fathers.
He also appreciated his brothers, who offered a hand of fellowship to him after he was chosen, promising to work with them for the good of the people, the Igala Kingdom and the state.
“I thank the people of the great and ancient kingdom of Igala and everyone who came from far and wide to honor this occasion.
“I thank the governor for recognising the recommendations of the ruling house and Kingmaker which restored us to the throne of our fore fathers after 103 years.
“It was a long and contentious race and I and my brothers of the four ruling houses maintained decorum, I appreciate them.
“We will all work together for the good of our people, the peace, progress of Igala Kingdom, Kogi State and Nigeria,” the Attah Igala said.
Sultan of Sokoto, Mujammadu Abubakar congratulated the Attah of Igala, admonishing him to seek God’s guidance for a peaceful and successful reign.
Abubakar told the Attah Igala that, now more than ever, with the situation of the country, he had a big role to play in fostering peace, unity and the progress of his people.
At the coronation were the Olu of Warri, Etsu Nupe, Tor Tiv, Aku-Uka Wukari, amongst others.