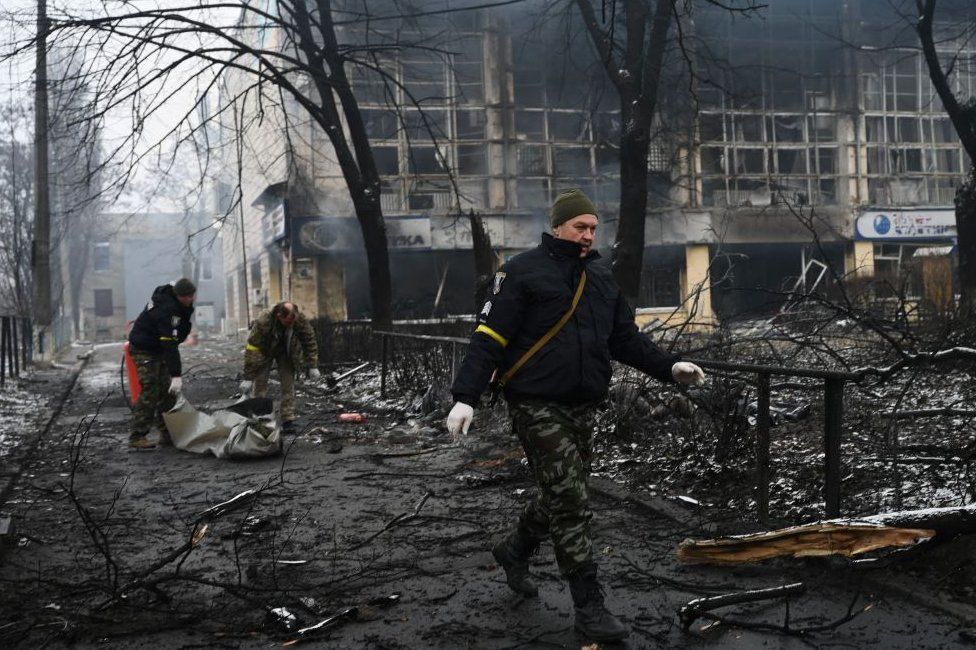 Russia’s invasion of Ukraine took a heavy toll on civilians on Wednesday as residential neighbourhoods were bombed and key cities surrounded.

The Russian military claimed it was in control of Kherson, a strategically important port city near Crimea.

However, local authorities said Kherson was still under Ukrainian control, despite being surrounded.

Russian forces also appeared to be surrounding key cities including Kharkiv and the port city of Mariupol.

Mariupol, in the south east, was under constant shelling on Wednesday, its deputy mayor Sergiy Orlov told the BBC.

“The situation in Mariupol is awful, we are near to a humanitarian catastrophe. We have been under more than 15 hours of continuous shelling without any pause,” he said.

“The Russian army is working through all their weapons here – artillery, multiple rocket launch systems, airplanes, tactical rockets. They are trying to destroy the city.”

Mr Orlov said Russian forces were several kilometres from the city on all sides, and strikes on key infrastructure had cut water and power supplies to parts of the city. One densely populated residential district on the city’s left bank had been “nearly totally destroyed”.

“We cannot count the number of victims there, but we believe at least hundreds of people are dead. We cannot go in to retrieve the bodies,” he said. “My father lives there, I cannot reach him, I don’t know if he is alive or dead.”

Ukraine’s emergency services said more than 2,000 civilians had been killed so far during the Russian invasion, though the BBC was not able to independently verify the figure. The UN said on Tuesday that at least 136 civilians have been killed, thought it estimates that the actual toll is higher.

Mr Zelensky said on Wednesday that Russia was attempting to “erase” his country.

Russia’s defence ministry said on Wednesday that its forces were in total control of Kherson, a city of nearly 250,000 people just north of Crimea, the peninsula annexed by Russia in 2014. Local authorities said Kherson was still under Ukrainian control.

Larysa Pavlovska, a 58-year-old paramedic in Kherson, said her part of the city was quiet on Wednesday but other parts were smouldering after intense overnight shelling and some residential districts had been “bombed out”.

“Local residents say Russian armoured vehicles can be seen moving in the city, people say about 50 units,” she said. “They have been spotted by the state regional administration building.”

Video footage verified by the BBC appeared to show Russian troops in the centre of Kherson.

Inesa Chamlai, the deputy head of the emergency aid centre in Kherson, said Russian troops had prevented them taking a wounded 55-year-old man to hospital. The man stepped on a mine and lost his leg, Mr Chamlai said.

“Our ambulance team was dispatched but was then prevented by Russian troops from taking the man to hospital,” he said. “The soldiers ordered to bring him back to his house where he will definitely die.”

Ukrainian forces said Russian paratroopers had landed near the eastern city of Kharkiv on Wednesday, leading to street fighting on the outskirts of the city. Local officials said a cruise missile hit a city council meeting, blowing off the top of the building and wounding three. At least 18 people have been reported killed in the city in the past day.

Watch: The moment Kyiv TV tower was struck by a Russian missile

“It is exhausting and terrifying living under this pressure,” said Iryna Ruzhynska, 40, who was sheltering with her family in her second-floor apartment on Wednesday.

“We have put scotch tape on the windows and pillows by the window stills,” Ms Ruzhynska said. “We don’t turn on the lights, only the torches on our phones. We managed to go to the store yesterday, but we queued for four hours and there was virtually no food left.”

There were growing fears in the capital Kyiv over a 40-mile long convoy of Russian military vehicles just 15 miles north of the city, though US officials said on Wednesday the column was barely moving. Russia’s air force struck a television mast in the capital on Tuesday, killing five people at the site of a Nazi massacre which killed over over 33,000, mostly Jews, and a missile strike west of Kyiv, in the city of Zhytomyr, killed four people including a child, a Ukrainian official said.

President Zelensky, who is Jewish, condemned the strike at Babi Yar, the site of the massacre, accusing the Russians in a statement on Wednesday of trying to “erase” Ukrainians.

“They know nothing about our capital. About our history. But they have an order to erase our history. Erase our country. Erase us all,” he said.

A UK government spokesperson said Prime Minister Boris Johnson spoke to Mr Zelensky on Wednesday “to condemn the abhorrent attacks on Ukraine in the recent hours and days”.

In an address on Tuesday, the US president Joe Biden called Russian President Vladimir Putin a “dictator” and promised “robust action to make sure the pain of our sanctions is targeted at Russia’s economy”.

Nearly a week after invading, Russia is facing increasing economic turmoil at home as it is hit by increasing sanctions. Some Russian banks have been excluded from the international SWIFT payments system and Russia’s central bank may face efforts to prevent it accessing £470 billion ($630 billion) of foreign reserves.

The Moscow Stock Exchange remained closed for the third day in a row on Wednesday as authorities tried to limit the impact of the sanctions.

“The Russian economy has suffered a serious blow,” Kremlin spokesman Dmitry Peskov said, insisting that it was “still standing”.